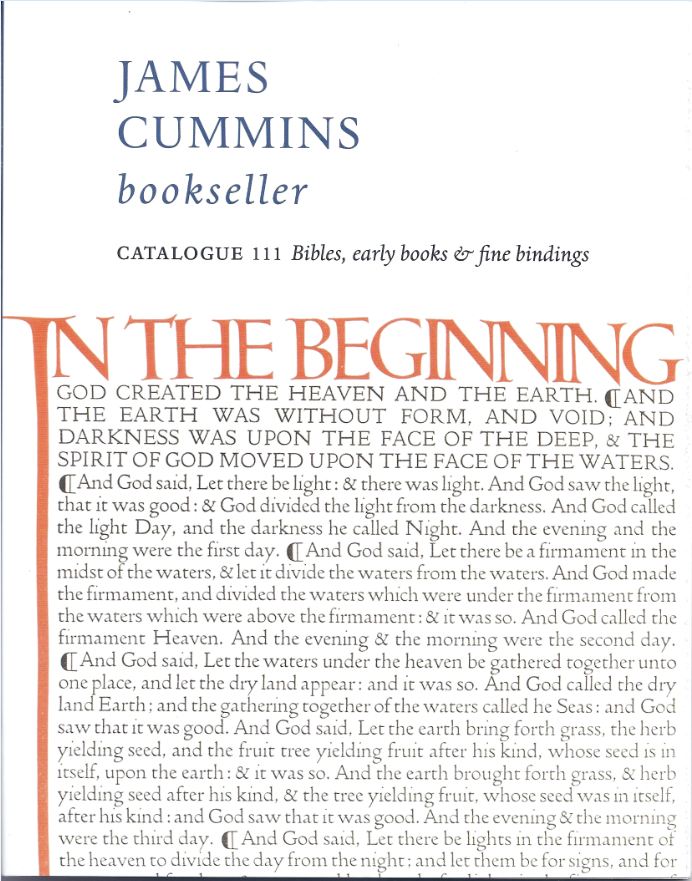 The beginning of the Doves Press Bible.

In the Beginning... James Cummins Bookseller has issued Catalogue 111. Bible, Early Books, & Fine Bindings. These are works overwhelmingly with a theological bent. With a concentration on very early works, including many items of incunabula, one would expect religious material. Most books printed in those days were meant more to save one's eternal soul than manage their temporal concerns. It's no coincidence that Gutenberg was famous for printing a Bible. Here are a few of these works from Cummins' latest catalogue, and they range from dawn-of-printing incunabula to fine press books from the 20th century.

Item 80 is the 1472 Strassburg edition (a year after the first) of one of the most important early biblical texts. It was the first printed commentary on the Bible, and it was regularly used by scholars for many centuries. It is entitled Postilla super totam Bibliam, and it was written by Nicolaus de Lyra, a Franciscan who lived during the 13th and 14th centuries. It had been passed around in manuscript form in the almost two centuries before printing became available. De Lyra's book shows a section of Bible verse surrounded by his explanation of the text. He believed in its literal meaning, arguing that any mystical interpretations must be based on its literal truth. Priced at $175,000.


Item 6 is an early account of The History of the Church of Englande. Very early. This is not King Henry's Anglican Church. The book was written during the 8th century, when the Church of England was the Catholic Church. The author was the Venerable Bede, an English monk whose life encompassed parts of the 7th and 8th centuries. Bede has become known as the “Father of English History” for his this work. It begins with the conquest of England in the first century by Julius Caesar, and proceeds to the present time, which was the year 731. It covers both the ecclesiastical history, including the introduction of Christianity and its eventual spreading through the land, as well as political development. Considering how little is generally known about this time in English history, Bede's work is of enormous importance. This is the first English translation, published in 1565. As is often the case, it is bound with Thomas Stapleton's A Fortresse of the Faith First Planted amonge us Englishmen...The Faith of which Time Protestants Call, Papistry. $12,500.


Item 55 is another thorough historical work: The History of St. Paul's Cathedral in London, from its foundation until these times... If you are looking to learn more about the London landmark visitors flock to see today, you will be disappointed. This is a history of the previous cathedral that stood in the same spot for 600 years. The earlier version was built at the time of the Norman Conquest. Actually, there were still earlier editions, including one mentioned in Bede's history, but they likely were at different locations. This St. Paul's was built over several centuries, but by the time of King Henry VIII, deterioration had already set it. He helped the process, and a century later, despite some work in the 1630s, it began to look like the end could be near. That is when William Dugdale wrote this account, digging up all the ancient records and everything else he could find to preserve the cathedral's history. This book was published in 1658, and none to soon. St. Paul's was consumed by the Great Fire of London in 1666, and rather than attempting a reconstruction, an entirely redesigned cathedral was constructed to replace it. That is the St. Paul's that stands today. $6,000.


Item 10 is an early printing of the Book of Exodus using the “Cherokee alphabet:” Exodus: or the Second Book of Moses. Translated into the Cherokee Language. Its loose gatherings were printed from 1853-55. It was translated by Samuel Austin Worcester and Stephen Foreman. As a youth, Worcester befriended Elias Boudinot (Watie), later the Cherokee leader of the faction that favored voluntary consent with orders to move from Georgia to Oklahoma. Worcester was inspired to be a missionary to the Cherokees, to which he would devote his life. One can only wonder how members of the tribe saw the Book of Exodus, a welcome exodus to a “Promised Land,” compared to their own forced exodus from their ancestral home to a land they did not wish to inhabit. $750.


Item 13 is the masterpiece of the Doves Press, The English Bible, five volumes published 1903-1905 (pictured on this catalogue's cover). Doves was the creation of Thomas Cobden-Sanderson (along with Emery Walker), who had worked with William Morris in earlier years. Doves published 40 books from 1900-1916, with Cobden-Sanderson destroying their type at the end so it could never be used in a lesser way. The Doves Bible is noted for its initial red letters, and the red first line of the Book of Genesis. $15,000.