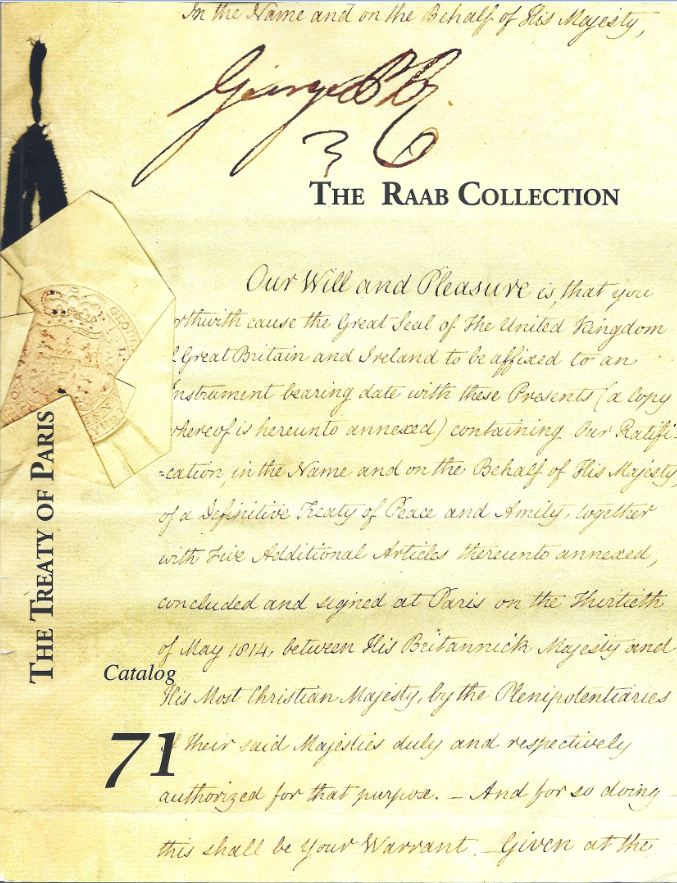 Important material is offered by the Raab Collection.

The Raab Collection recently issued a new selection of historical material, Catalog 71. These are, for the most part, signed historical documents, though there are a few not amenable to such a description, such as a swath of cloth from Martha Washington's dress, the tape recording from Air Force One the day President Kennedy was assassinated, or a strand of hair from British abolitionist Thomas Clarkson (the latter is, however, taped to a signed letter from American abolitionist Gerrit Smith). This is material from important players in American and world history, with many of the documents themselves being of substantial historical importance. Here are some examples of what is to be found in this latest catalogue from the Raab Collection.

Item 8 is an eyewitness account of one of America's greatest military victories on home soil, and perhaps the greatest military victory ever in a war that was already over. Near the end of the War of 1812, late December of 1814, the British entered Lake Borgne, near New Orleans, overwhelming the small American flotilla defending it. It was to be the starting point of a land invasion on the city shortly thereafter. The British thought they had the upper hand when they attacked on January 8, 1815, but their plans went terribly awry. Attacking across open fields, they were not prepared for the heavy gunfire from the rag-tag defenders of Andrew Jackson. Enormous numbers of British soldiers became casualties, often fatalities. Most of the British senior officers were gunned down, leaving the soldiers leaderless, often frozen in place. Finally, they were forced into a full-scale retreat, their mission in ruins. The following day, Laura Florian, a resident of New Orleans, wrote a lengthy letter to Lydia Roosevelt, the wife of Nicholas Roosevelt (she was a great aunt of the not-yet born President Theodore Roosevelt). She describes in great detail the heroism of the defenders, including those who attempted to defend Lake Borgne earlier, and those who overwhelmed the British in the Battle of New Orleans. She also describes the carnage - “Pirogues and carts have since yesterday morning been incessantly employed in bringing in the wounded prisoners and have not yet concluded the painful task.” Prisons had to have their inmates moved elsewhere to take in the flow of British soldiers. Of course, the ultimate irony of this battle is that the British and Americans had agreed to a peace treaty on December 24, 1814, but communications being so slow at the time, neither side was aware. Priced at $15,000.


Robert Livingston already had a long career as a patriot, dating back before the Revolution, and a public servant thereafter when President Jefferson tapped him for the most important mission of his career. Jefferson was aware that Napoleon had his hands full with the British, and he did not want to see that conflict spill over to the borders of the United States. He also wanted to assure free navigation of the Mississippi. So, he sent Livingston to France to make an offer to Napoleon – he wished to purchase New Orleans, and the U.S. was prepared to pay $10 million to effect the deal. However, on his own, Livingston decided to feel out Napoleon as to whether the latter might be interested in an even larger deal. His timing was perfect. Preoccupied with the British on the continent, and a successful native rebellion in Haiti, and not wishing to have to defend the Louisiana Territory as well, Napoleon offered it all to Livingston. For an additional $5 million, Livingston was able to put together a deal for the entire Louisiana Territory, a purchase which instantly doubled the size of the United States. In 1804, his mission complete, Jefferson sent this letter to Napoleon, It's his official notice that Livingston has resigned as Minister Plenipotentiary of the United States as he desired to return home. Raab notes that there is one other copy of this letter known, the explanation being that in the days of long sea voyages and sinking ships, the President likely would have sent three or four copies overseas to be sure that at least one reached its intended destination. Item 18. $75,000.


In 1872, twenty years removed from the White House, former President Millard Fillmore looked back on his life with surprise and satisfaction: “I was just an apprentice with little hope of being anything but a mechanic, yet fortune has given me what I never anticipated in worldly honors or dared hope for.” Indeed, fortune raised Fillmore from obscure nobody to an obscure U.S. President, a name known more for being forgotten than for the man's accomplishments in office. He was serving in the hardly high profile position of Comptroller of New York when he was chosen by the Whig Party to be Zachary Taylor's running mate in the 1848 election. Taylor was a popular hero of the Mexican War, but a southerner and a slaveholder. The party wanted a northerner for balance, but not one who would offend the South. The unknown Fillmore was a perfect fit. Of course, no one imagined that Taylor would die in office after little more than a year, putting Fillmore in the presidency just as the addition of new land obtained through the Mexican War was driving North-South divisions to the boiling point. Unlike the strong-willed Taylor, Fillmore tried to compromise his way out of the mess, with the eventual result being that the situation got even worse. Nevertheless, in fairness to Fillmore, one would have to say he was the best president of his decade, the 1850s, a tribute more to the ineptitude of the two presidents who followed him than to Fillmore's accomplishments. Item 1 is a letter Fillmore wrote to an old friend in 1872, two years before he died. He looks back on his life pleasantly: “My life, upon the whole, has been a very happy one...” Almost his only grief, he says, is “the loss of relatives and friends.” He says he is ready to go when called, and hopes for God's blessings in eternity. “I feel that my work here is done, and others more competent will soon fill my place.” Actually, the presidents who followed at this time weren't all that much more competent than Fillmore, at least until Lydia Roosevelt's grand nephew showed up. $8,000.