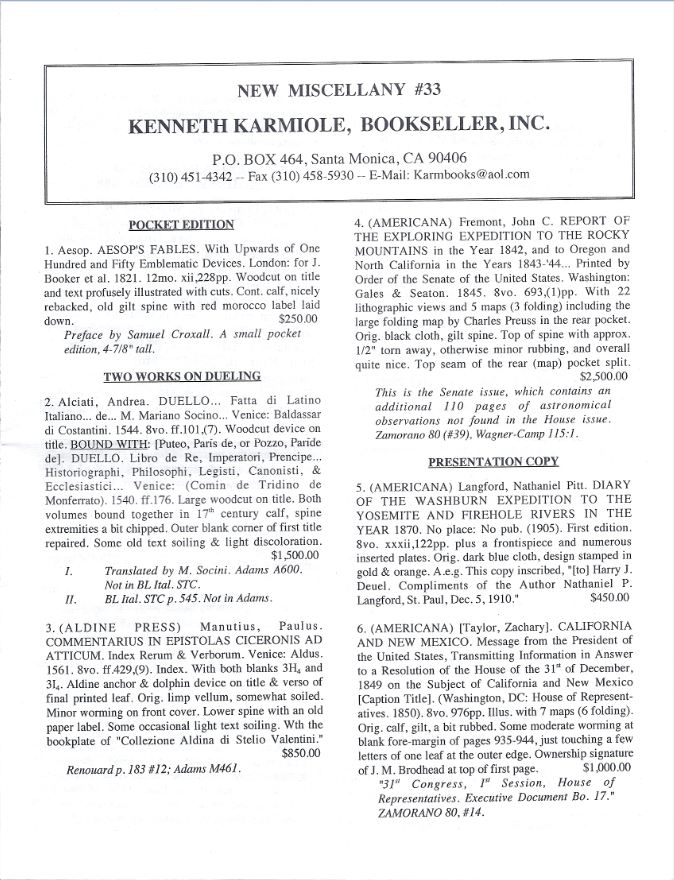 A New Miscellany from Kenneth Karmiole.

Kenneth Karmiole, Bookseller, has issued a New Miscellany #33. Karmiole’s catalogues truly are miscellanies, the material so varied it is hard to describe. There are ancient Latin treatises, often translations from Greek and Roman times, travel books, Americana, several California items from the Zamorano 80, medical books, children’s books, fine press books… The list goes on. All we can do is provide a few samples, with the understanding that they are in no way representative of the wide variety of material you will find in this catalogue.

Item 41 is Erasmus Darwin’s The Temple of Nature: or, the Origin of Society. Those Darwins were always writing about the origin of something! Erasmus was Charles Darwin’s grandfather, a great botanist and scientist in his own right. At times, he wrote his scientific observations in the form of poems, as is the case with this, his last work. It was published in 1803, the year after he died. Erasmus Darwin was an evolutionist long before his grandson. He is not credited for the discovery as, unlike Charles, he never figured out the mechanism, though he recognized that organisms were evolving into new forms. This poem (which, despite its title, is not about “social Darwinism”) shows how life emerges in more advanced forms, culminating in man. $850.


A century before Erasmus Darwin there was another great botanist in England by the name of John Ray. Ray based his ideas on empirical observations, somewhat obvious now, but original in his era when rationalists believed things could be better understood through intellectual reasoning. Ray is particularly noted for coming up with a solid definition for species, concluding that differences between individuals from the same seed were not different species, while the similarities regularly present were characteristics of a species. He was essentially correct, although evolutionary theory would later establish that gradual changes between plant/animal and offspring could eventually lead to new species. Item 98 is a copy of the second and enlarged edition (1692) of Ray’s The Wisdom of God Manifested in the Works of Creation. $600.


Item 69 is an early work from the preeminent economist of the 20th century, John Maynard Keynes. Keynes would argue during the Depression for government borrowing, in effect priming the economy when no one else was spending. We hear both sides of his argument again today. While he was engaged in economics from the time he entered college, Keynes also wrote about probability theory. Item 69 is his a Treatise on Probability, published in 1921. $600.


Item 6 is one of those Zamorano 80 numbers, number 14 to be exact. It is titled California and New Mexico. Message from the President of the United States… That President was Zachary Taylor, though he had died before this was published in 1850. It is a thorough account of these territories/states in the period of 1847-50, the time of the Mexican War and the seizure of the land. It covers the formation of a provisional government, natural history, transition of California to statehood, Fremont’s expedition, and mining. $1,000.


Item 115 is a sad tale that is based on a true story, though undoubtedly with much embellishment. It is the tale of Amos Wilson, whose actual name was apparently William Wilson, but became “Amos” for some unknown reason. As the story goes, his sister Harriot, whose real name was “Elizabeth” (another mystery), was condemned to death. Amos/William managed to secure a pardon from the Governor, but on his way to deliver it, he was delayed by a swollen stream. He arrived too late. Not surprisingly, it was a devastating event for Mr. Wilson. He deserted society, went off to live in a cave near Harrisburg, Pennsylvania, where he stayed for the remaining 19 years of his life. He became known to locals as the “Pennsylvania Hermit.” Item 115 is one of the books about him, The Sweets of Solitude, published in 1822. $150.