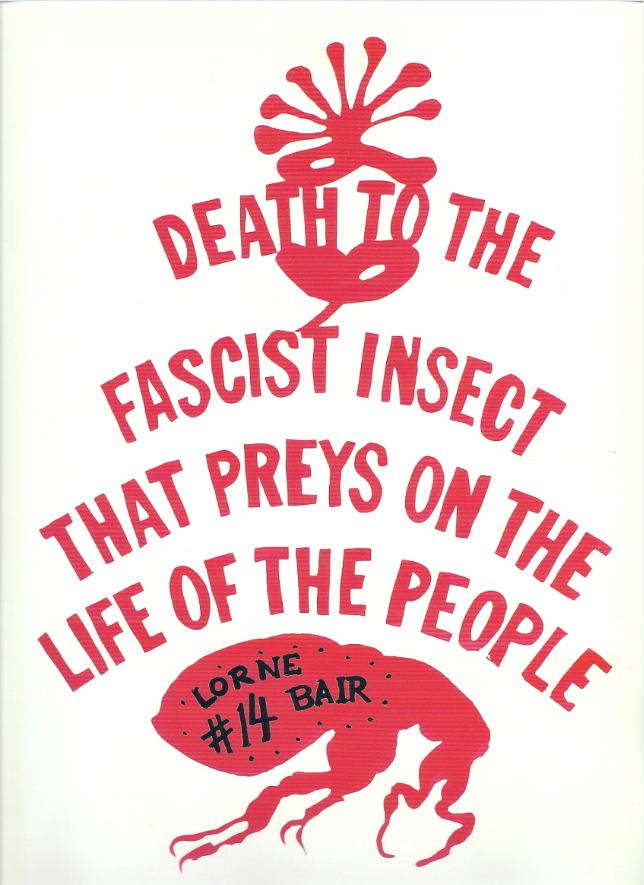 Watch out for the bite of the fascist insect.

Lorne Bair Rare Books, Manuscripts & Ephemera has issued a new catalogue, and despite the image on the cover, which might lead you to believe its title is “Death to the Fascist Insect that Preys on the Life of the People,” it is actually simply called Catalog 14. That piece on the cover is not surprising for Bair, who generally specializes in material well to the left of center. However, the Winchester, Virginia, bookseller also frequently includes some items far to the other side of the spectrum (what you won't find here is much material from the center). This time, there is also a substantial amount of material from the far right, Nazis taking their place at the table with Communists. While the far left wing material offered tends to be more over-the-top, some of the pieces from the right can be horrifying, such as the Adolph Hitler photo album. Here, now, are some of the items from the farther edges of the spectrum being offered.

William Z. Foster was a labor organizer in the teens who joined the Communist Party in America in the early 1920s. He rose in the ranks as a result of taking the right side in the squabbles going on in Moscow at the time. He supported Stalin over Trotsky. Despite battles within the U.S. party, Foster managed to secure the party's nomination for President in 1932. It was in this year that he published this explanation of the party platform, Toward Soviet America. He was also stricken with heart problems that year, that reduced his power going forward. Still he managed to survive until 1961, dying in Moscow and receiving a state funeral. And, for those not familiar with the voting in 1932, he lost the election. Item 15. Priced at $150.


Item 80 is an unexpected sounding title, The Communistic Societies of the United States; From Personal Visit and Observation. One would not expect anyone to use the “C” word in describing a society at all sympathetically with the paranoia that surrounded the word. However, this book goes back to the days before it had such connotations, the pre-Soviet era. Those communistic societies were more often referred to as “utopian,” idealistic communes, often based on religious beliefs. The most notable such group was the Shakers, a devout, celibate group who made sturdy, but uncomfortable furniture, consistent with their no-frills, no-fun lifestyle. Author Charles Nordoff visited several of their communities and those of other groups, including Aurora, Bethel, Amana and Oneida communities. Published in 1875. $350.


We need to give the other side its due, so here is one from the very far, extreme right: Hitler and the 20th Century Hoax, by Kenneth Goff, published circa 1954. Goff was a minister from the Christian Identity movement, a white supremacist theology with little affection for anyone else. The Nazis would have fit in well with many of these people, but once the war started, it was hard to be pro-Nazi and develop any kind of following in America. What's a poor anti-semite to do? Goff had the answer. Call Hitler a Communist of Jewish background, bankrolled by Jewish bankers. Blame the victims. Item 32. $95.


Here is an item that shows just how involved its author was in his state. Huey Long was a Governor of and Senator from Louisiana who was assassinated in the year this songbook was published – 1935. He is a man hard to peg on a traditional left-right spectrum. He was an extreme populist, passing much legislation designed to help the average people of his poor state, but he was a dictatorial, bullying leader not above his share of corruption. His career came to an end when he was gunned down by the son-in-law of a political opponent, and though his family and political machine continued to operate in Louisiana almost to the next century, it was never close to the powerhouse it had been under Huey. Item 121 displays a bit of how much he had become embedded in every state institution. It is LSU Songs, containing music to the songs Darling of L.S.U. and Touchdown for L.S.U., with words and music by Long and L.S.U. Marching Band Director Castro Carazo (selected for the position, naturally, by Long). $200.