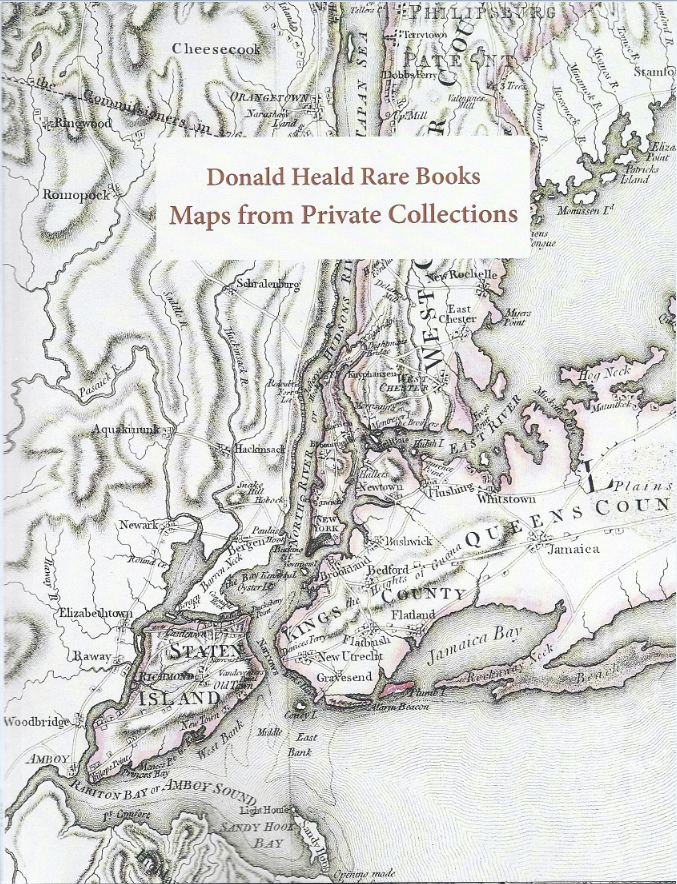 Donald Heald Rare Books has issued a catalogue of Maps from Private Collections. These are North American maps, ranging from the 17th to the 19th century. Leafing through the catalogue, you can see how knowledge of the continent grew from not much beyond the east coast, to gradually inland, on to the west coast, and lastly, starting to fill in the Northwest. Along the way, the original American colonies start to take shape, the Great Lakes appear, the Mississippi River gains its full length and realizes it is supposed to end in Louisiana, not Texas, the Rio Grande stops draining into the Pacific and into the Gulf of Mexico, where it belongs, and the island that is California attaches itself to the mainland. There were a lot of misconceptions at one time, but that was understandable as almost no one had ever been there. Here are a few of the early maps offered by Donald Heald Rare Books.

Item 8 is an early French map of Canada (and a bit more), or what the French then called “New France”: Description de la Nouvelle France... This is the first state of the 1643 map produced by Jean Boisseau. It was based on the explorations and map of Samuel de Champlain. Names along the New England part of the map are those of Champlain, with little recognition of the English colonists. The most notable feature is that this was the first map to show and name all five of the Great Lakes. Some of the names have since gone by the wayside. Lake Ontario is no longer known as “Lac St. Louis,” Huron as “Mer Douce ou Lac,” Michigan as “Lac des Pauns,” but they are all there. Their locations, and sizes also leave a lot to be desired, but other than a few visits primarily by missionaries, no one from the outside world had any real knowledge of them. Nonetheless, the map represents an important first step to understanding Canada and the upper Midwest. Priced at $22,000.


It would only be a few years before another Frenchman, Nicolas Sanson, would publish his important map of the North American continent, Amerique Septentrionale. It was dated 1650, though this is the 1659 third state. The Great Lakes are now in a more recognizable form, and Ontario has its name. Montreal now makes an appearance, and to the north of Canada there runs a strait, all the way to a mysterious “glacial sea,” in the great unknown that was then the Northwest. It evidently was designed to reaffirm the cherished belief that there was Northwest Passage. Santa Fe is misplaced on the Rio Grande, which flows into a straight off the Pacific Ocean, between the mainland and the island of California. To the north of the island lies the land of “Conibas,” the name given to an area that was still totally unknown during the mid-17th century. Item 58. $7,500.


Here is one more tribute to French mapmakers, and it comes at a time of open hostilities between the British and their American colonists. The French must have enjoyed watching this unfold. It is Carte du Theatre de la Guerre entre les Anglais et les Americains (map of the theater of war between the English and the Americans). It was produced by Louis Brion de la Tour in 1777. Two areas on the map show battles. Near Philadelphia, British positions are shown indicating their occupation of that city. To the north, the Battle of Saratoga is shown, with the notation that British General Burgoyne was defeated on October 16, 1777. Item 10. $6,000.