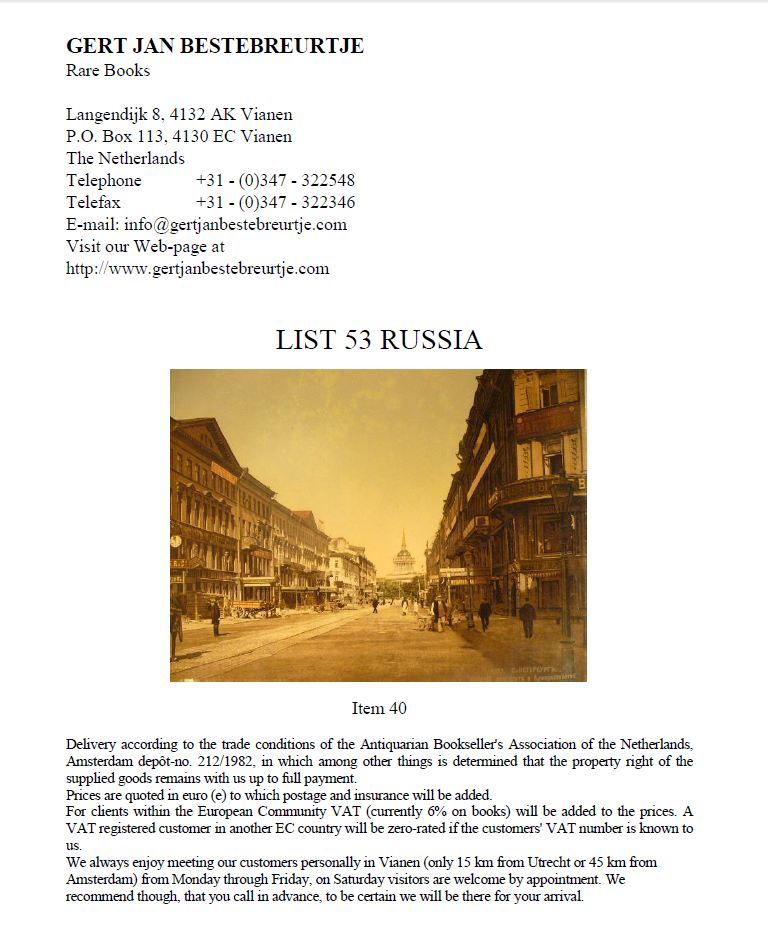 From Gert Jan Bestebreurtje Rare Books this month comes their List 53 Russia. These are mainly travel books, accounts by people who roamed around the land, primarily during the 19th century. Most of the travelers were Europeans, but there is an occasional American, or a Russian traveling the homeland. Some travels were exclusively in Russia, others visited multiple lands, or fringes of that large nation. None of the books was written in Russian, the languages of choice being Dutch, French, and English. Here are a few samples from Mother Russia.

During the 19th century, missionaries spread out to the four corners of the globe to save the souls of those who had not heard the good news. They endured all kinds of deprivations and hardships to do so, but it did not inhibit their calling. Item 6 is Shamans, Lamas and Evangelicals. The English Missionaries in Siberia, by C.R. Bawden, published 1985. This is an account of missionaries who ventured to Eastern Siberia in the year 1818. Priced at €35 (approximately US $46).


Item 36 is Through Siberia, by Henry Lansdell, a fourth edition published in 1883. The first was published a year earlier. This was quite a popular book in its day, as Lansdell was reporting on a land that was still little known to the outside world, even at this late date. Lansdell was also a missionary, though this trip was more about exploring the country. Lansdell traveled from London to St. Petersburg, and then clear across the nation to the Pacific coast. He reports on various things he saw, such as the mines and the prisons. He may have been the first foreigner to do so. €175 (US $229).


Here is one of those non-travel books. It is The Moon Man. A Biography of Nicholas Miklouho-Maclay, by E. M. Webster (published in 1984). Miklouho-Maclay was a Russian ethnologist, scientist, humanist and traveler. He traveled from Russia, not to it, to explore. He conducted ethnic studies of natives in Australia and New Guinea during the 1870s and 1880s. He was a supporter of Darwin's theory of evolution, and was a leading advocate of the proposition that different human races were all of the same species. That was an important distinction at the time, as many leading scientists of the day believed that some human races were more advanced than others. Naturally, the white scientists posited that the white race was superior, using this to justify domination or even enslavement of peoples with darker skin. As for the “Moon Man” sobriquet, it came after he set off a flare one night and astonished and frightened natives concluded he must have come from the moon. Item 63. €35 (US $46).


Next we have a book by an inveterate traveler, Isabella Lucy Bird (or Mrs. Bishop). Miss Bird traveled to America as a young lady, a gift of her father. She returned home for about a decade, but was bitten with wanderlust. After her mother died, Isabella took to road and seas, compiling various journeys all over the world. Not having independent wealth, she financed her trips by writing books about them. The books became very popular with her contemporaries. She took time off to get married in 1880, but when her husband died six years later, it was time to hit the road again. However, this time it would not be as just a tourist. First, Miss Bird studied medicine, and then headed off to help the missions. Item 8 is an account of a trip from this period, which skirted around the Russian frontier: Journeys in Persia and Kurdestan including a summer in the Upper Karun region... a first edition published in 1891. €495 ($648).


Robert Ker Porter was an artist, writer, diplomat, and traveler. He was also a very engaging personality. Seems like everywhere he went, everyone liked him. He went to Russia as a painter for the Czar in 1804, and while he was there, won the heart of a princess. From there he would travel to Sweden and Spain, and accompanied British forces in their wars against Napoleon. However, in 1812, he returned to Russia to marry his princess, and later ended up serving as British consul in Venezuela. Item 46 is a copy of his Travelling Sketches in Russia and Sweden during the Years 1805, 1806, 1807, 1808, a second edition published in 1813. €2,250 (US $2,950).