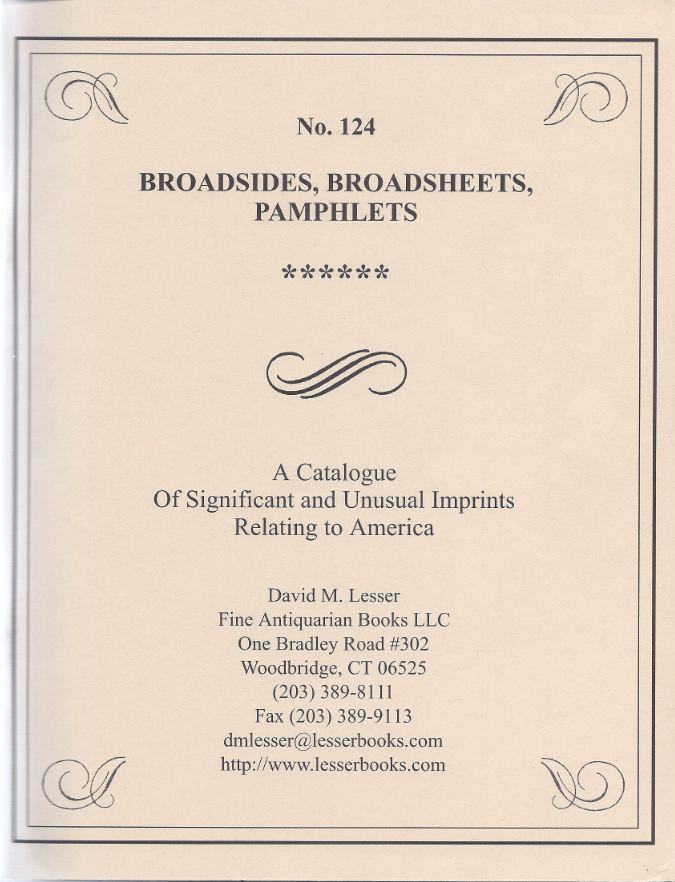 David M. Lesser Fine Antiquarian Books has issued a catalogue of Broadsides, Broadsheets, Pamphlets. These are ephemeral items, not intended to last long, the ones in this catalogue no exception to that rule. They generally carried the news, political disputes, and other issues of the day. Unlike books, usually meant to be read for years, the assumption was that their message would be read and soon discarded. Fortunately, some got put away in boxes and attics where they lay untouched for decades, even centuries, their moment in time preserved like fossils to be rediscovered many years later. What they offer us today is a look at that moment, as it was seen then, without the benefit of hindsight. There is an immediacy to this ephemeral material unlike the longer range views usually seen in books. The majority of the material in this catalogue comes from the 19th century, although there is material from the 18th, and a few from the 20th, as well. Here are some samples.

Item 27 contains two very rare broadsides, previously recorded as separate pieces but here printed together on a single sheet. The sheet folds into four pages, two carrying the proclamations, the other two becoming the cover for mailing. One is dated April 10, 1783, the other April 17. They were published by the Boston Committee of Correspondence at the conclusion of the Revolutionary War. They display little sympathy for Massachusetts residents who remained loyal to the King. This copy was evidently sent to the selectmen of Gorham. It urges the towns to prevent Tories from returning to their land. Variously referring to them as “absentees,” “conspirators,” and “ingrates,” it calls on the towns to prevent these disloyal people from returning “To their Estates, the Rights of Citizenship, and the Enjoyment of Happiness they have been the main Instruments of making us thus long sorely toil and bleed for.” Priced at $15,000.


Those who fought on the losing side during the Civil War fared much better than those who supported the wrong side in the Revolution. Other than those at the highest levels, most Confederate soldiers were able to return to their land and regain full rights of citizenship by signing a loyalty oath. Item 41 is a collection of three such oaths, the wording being slightly different, but each required swearing loyalty to the U.S. Constitution, and the Emancipation Proclamation in particular. The three who received these pardons were Arthur McMurtry of Galveston, Texas, Edward Cousinard, a former mayor and future sheriff of East Baton Rouge, Louisiana, and Thomas K. David of points unknown, who took his oath in Washington, D.C. Item 41. $3,250.


Item 135 is a folded, folio leaf promoting McCormick's Self Raker. Improved for 1867. Cyrus McCormick developed the first dependable mechanical reaper in the 1840s while living in Virginia. As he began to make sales of his machine, he found customers were mainly in the west, where land was more abundant. He moved to Chicago, set up a manufacturing plant, and began pumping out the reapers. It was McCormick's device that was perhaps more responsible than anything else for the development of the American farm belt, as it enabled the operation of large farms, something not possible before the invention of automated harvesting. McCormick's firm, the McCormick Harvesting Machine Company, was merged with others to form International Harvester (now Navistar) in 1902. $600.


When the National Union Executive Committee, a pro-Union organization during the Civil War, promoted the vice-presidential candidacy of Andrew Johnson, they were more prescient of future events than even they could have imagined. Item 118 is an 1864 broadside headed, Who Shall Be Vice-President? Shall He Be a Loyal or Disloyal Man? It supports the candidacy of border state senator, Andrew Johnson, Lincoln's running mate, over peace Democrat George Pendleton of Ohio, running on the Democratic ticket under George McClellan. Pendleton's ties to the Copperheads may have made him particularly odious to Union supporters. This broadside emphasizes the importance of a loyal vice-presidential candidate on practical grounds - “Past experience shows that the choice of Vice-President of the United States is almost as important as that of President. In case the latter dies or becomes unable to perform the duties of his office, they devolve upon the former.” In the early days of the Republic, no one thought too much about the vice-presidency, but by 1864, two of the previously six elected presidents had died in office, and all too soon Lincoln would make it three of seven. $850.