Literature to 1900 from Peter Harrington 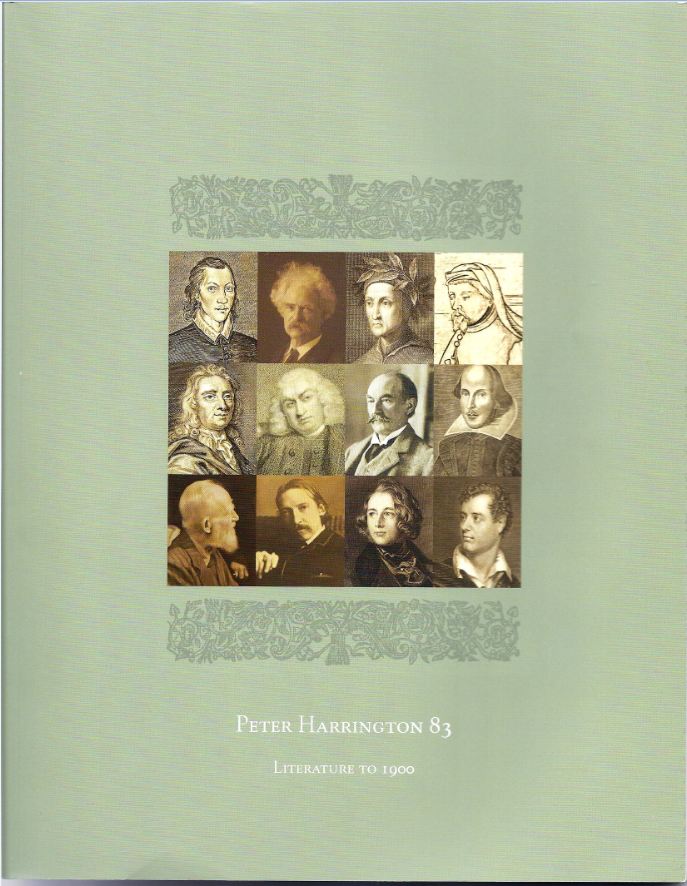 Peter Harrington recently published their Catalogue 83. This latest collection is titled Literature to 1900. It contains items that go all the way back to the beginning of printing (yes, Gutenberg), but nothing past the 19th century. You will find most of the great names in literature and poetry from antiquarian times among the 196 items offered. Without further ado, we will take a look at some of the works.

There is no greater name in the field of literature than that of William Shakespeare. The first edition of his Comedies, Histories, and Tragedies was not published until after the man died, preserved, most thankfully, by friends and associates without whom his works would have undoubtedly been forever lost. The “first folio” was published in 1623, and Shakespeare's works would be published just three more times in the 17th century. Item 136 is a copy of the final of these editions, the fourth folio, published in 1685. The fourth folio includes the seven additional plays added to the third folio, only one of which today is actually recognized as being written by Shakespeare (of course, some people still question whether Shakespeare wrote any of his plays, but that's an issue for another day). Also like the third, the fourth folio dropped the final “e” from Shakespeare's name. It would be returned in the following century. Harrington notes that the fourth folio was actually the preferred edition among collectors until the mid-18th century when, after arguments for primacy by Samuel Johnson and others, the first was established as the most collectible. Nonetheless, all four folios today command great prices, the first in the millions of dollars. Item 136. Priced at £140,000 (British pounds, or roughly $221,673 U.S. Dollars).


Returning to the dawn of time, at least as far as printing is concerned, we go back to the year 1455. Complete Gutenberg Bibles have been virtually unobtainable for a century, and it's hard to imagine when, or even if, another will become available. Those wishing to collect a piece of the first work of movable type printing have needed to do so through a leaf of the Bible. Almost a century ago, New York bookseller Gabriel Wells obtained an imperfect copy and began selling it off in leaves. Most he included with a copy of A Edward Newton's essay, the combined title being A Noble Fragment: Being a Leaf of the Gutenberg Bible, with a bibliographical essay by A. Edward Newton, published in 1921. This leaf comes from Jeremiah, containing chapter 18, and parts of 17 and 19. Item 13. £62,500 (US $98,956).


Many novels make great reading, but few have anywhere near the social impact of this one: Uncle Tom's Cabin; or, Life Among the Lowly. When this first edition of Harriet Beecher Stowe's classic was published in 1852, America was in the midst of its crisis over slavery. There had been rancorous debates in previous years, but there was also hope that the Compromise of 1850 might maintain the peace north versus south, that it might diffuse the confrontations. Stowe's novel was like throwing salt on the wound. It exposed the horrors of slavery in a way dry debate could not. Released on March 20, 1852, it took only a few days for the first printing of 5,000 copies to sell out, and by the end of the month, a second printing of an additional 5,000 copies was gone. Printing and the Mind of Man described the social impact of this book on the United States as “greater than that of any book before or since.” Any hope of a long term reconcilliation between slavery and freedom was seriously eroded by its publication. Item 159. £10,000 (US $15,835).


Item 21 was the spark of the bright, but brief flame that was the career of the Bronte sisters. In 1846, they published a book of poetry, using the masculine (though vague) pseudonyms of Currer, Ellis, and Acton Bell. It was a monumental flop, only 39 of 1,000 copies being distributed, most free. It was not an auspicious start, but in 1847, Charlotte Bronte secured publication for her first novel, Jane Eyre. An Autobiography. Edited by Currer Bell. Still using her pseudonym to disguise her gender, Charlotte achieved great success with her first novel. Her sisters quickly followed with successful novels of their own. The flame of success would be painfully brief. Both of her sisters had died by 1849, and Charlotte only survived until 1855. Recognition came far too late. £50,000 (US $79,173).