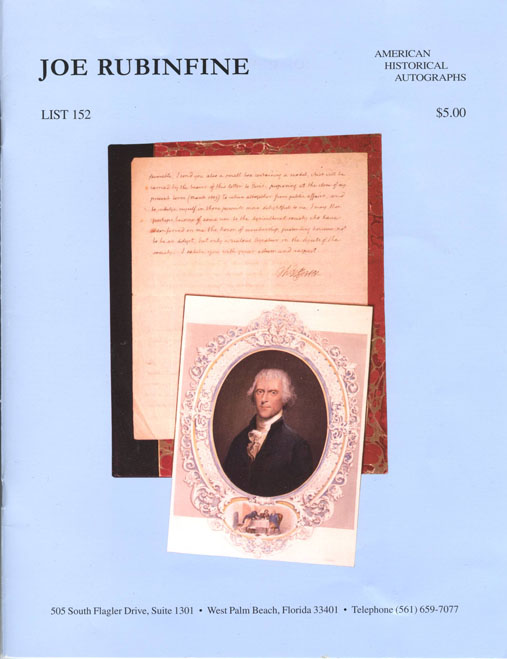 Joseph Rubinfine's List 152 is described as a collection of American Historical Documents. These are documents running from the late 18th century to the early 20th, and the great majority are from names everyone knows. They range from the most collectible of American autographs, such as Washington and Lincoln, to those not quite so weighty, like Van Buren and both presidential Harrisons. This is certainly a worthy catalogue for those who collect important American autographs.

Item 22 is an interesting Washington letter as it comes from the in-between period, post Revolution but prior to his being elected president. So what was the father of his country doing then? Well, one thing he was doing was managing his farm. On August 22, 1785, he wrote a lengthy letter to Bataille Muse, who was Washington's agent for collecting rents. In it Washington speaks of the amount he is willing to pay for wheat, including a lengthy discussion of determining a fair price. In it, you see a glimpse of the principles which guided his actions. Washington is determined not to pay more than the market price being charged in Alexandria, taking care to note that a couple of bushels sold at a premium because someone was in a hurry does not constitute market value. On the other hand, Washington makes it clear he is not looking for any bargains either, just a fair price. Referring to the market price, Washington writes, "My prices are always governed by the Alexandria cash market - for I will neither give more, nor expect it for less." Priced at $35,000.

Item 19 is a letter you will never see from a politician today. Benjamin Franklin was just too honest. This is a cover letter for a recommendation for Dr. Thomas Ruston, along with an apology for oversleeping and missing him in the morning. States Franklin, "Excuse my not seeing you this morning, I was heavy to Sleep having taken a large Dose of Opium last Evening." No, that excuse would not fly in political circles today. This letter was written in 1789 and in the later stages of his life, Franklin used opium to relieve severe arthritic pain. $35,000.

General William Tecumseh Sherman is best remembered for two things: his "March to the Sea" through Georgia, and his steadfast refusal to run for president despite attempts to draft him for such a run. In 1884, he issued what has become known as the "Sherman Statement," the ultimate promise not to run. That statement has been slightly adjusted to "If nominated I will not run; if elected I will not serve." However, Sherman's disdain for politics and unwillingness to be involved goes back much earlier than that. Here is a letter from 1868, 16 years prior to his famous declaration, to H.W. Slocum, who commanded Sherman's left wing in his "March to the Sea." Among his quotes are, "As to politics it is impossible for language to convey my distaste of them." And then there's, "I have seen Fear, Cowardice, treachery, villainy in all its shapes contort & twist mens judgment & actions, but none of them like Politics." Some things never change. And finally, "They have tried to rope me in more than once, but I have kept out and shall do so, as long as I can & then I hope I shall die before what little fame I have is lost and swept away...." Sherman would prove to be faithful to his ideals the remaining 20 years of his life, though he quite likely could have been president if he wanted. Item 1. $4,000.