From the Counterculture to Whatever Else from Brian Cassidy, Bookseller 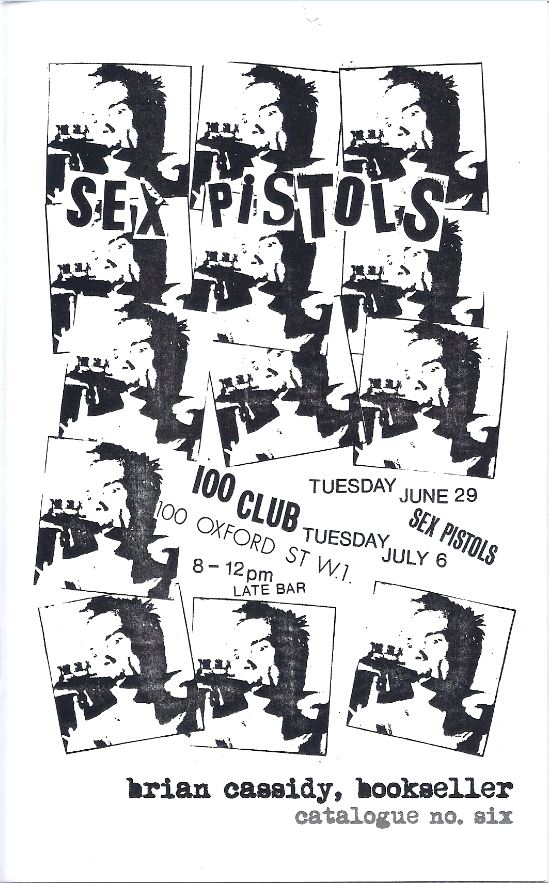 Brian Cassidy, Bookseller, has issued Catalogue Six. Cassidy's catalogues are hard to describe, being a mix of subjects, some a bit out of the mainstream. There are items that might be considered part of the counterculture, be it art, music, or radical politics. Other items are simply first editions, perhaps slightly off center, but not too far away. There is a group of personally collected albums, with such things as photographs, handwritten stories, scrapbook collections, and pressed flowers. An occasional piece can be downright ugly, such as the blackface Christmas pageant. Then there is the book I won't even try to explain or understand – Snatch 'N' Sniff: Vagina Poem and Picture Book. Yes, it has a scratch and sniff patch, and no, I don't know the answer to the next question you are about to ask. Let's just move on to see what else is here.

We will start with the item pictured on the catalogue's cover. It's a flyer promoting appearances by England's seminal punk band, the Sex Pistols, at the 100 Club on June 29 and July 6, 1976. The Pistols had formed the previous year, but didn't start publicly performing on much of a regular basis until that spring. By the time they began performing at the 100 Club, they had already been thrown out of a couple of other venues. Their angry, punk persona, unpolished music, and penchant for getting into fights did not comport well with expected musical standards. Their followers didn't mind. The anger struck a nerve. By the end of the year, the Pistols would release their first record, Anarchy in the U.K., and soon the entire nation would have the opportunity to appreciate their unconventional message and attitude. Item 116. $3,000.


Item 15 is an S&H Green Stamp invitation to Andy Warhol's exhibition at the Institute of Contemporary Art at the University of Pennsylvania. The exhibition opened on October 8, 1965, and was curated by Sam Green, who had managed a gallery in New York a short time earlier and was friendly with Warhol. The artist had suggested using the Green Stamp motif, which he had previously painted, for the invitation, in honor of Sam Green's name. Warhol was already well-known for his cutting edge pop art, and Green saw an opportunity for a major success. He whipped out 6,000 of these invitations, mainly for students, hoping to fill the gallery which held 300. He could not have imagined how successful he would be. Warhol himself, and Edie Sedgwick, who acted in several of his underground films, attended. A huge crowd came out to see the stars. They, and Green, had to escape through a hole in the ceiling. The Green Stamp invitation comes with the smaller, shorter run Campbell Soup invitations. Green obtained 350 tomato soup and 350 cream of mushroom soup labels from Campbells, the company being happy to play on the publicity Warhol had given them. Invitations were printed on the back of the soup labels. $7,500.


Andy Warhol brought his camera to Boston for a performance by his favorite band, the Velvet Underground, at the Boston Tea Party, August 11-12, 1967. Despite the Velvets' enormous musical influence and popularity with major artistic figures such as Warhol, there is almost no film of them in their early, or even peak years. Warhol's film from this concert was “lost” until 2009. Cassidy notes that it is one of only two performance films of the Velvet Underground with synched sound, and the only one in color. Item 17 is a poster promoting the event, announcing both the band's appearance and that of “underground filmmaker” Warhol. It belonged to the late guitarist of the Velvet Underground, Sterling Morrison. $9,500.


Here is a piece that looks like a more traditional, family values sort of thing. It is a pamphlet seemingly promoting Scouting and the Boy Scout Jamboree. The Boy Scouts were scheduled to hold a jamboree in Washington in 1935. This very wholesome looking item was written by Martha Millet and Sam Strong. However, look inside, and it is somewhat different from what it appears. It was produced by the American Communist Party, and they wanted to make sure the scouts heard their side of the story. The pamphlet attacks President Roosevelt for his record on child welfare, questions the ethics of holding such a jamboree while so many people in the country are starving, and attacks the Boy Scouts as a Fascist, “Jim Crow organization,” which encourages the boys to aspire to a life where they “work like hell, for all kinds of hours, for little pay...” Sure can take the fun out of scouting! The Jamboree was canceled, but not because the scouts rebelled against their capitalist oppressors. It was in response to a polio epidemic. Item 93. $475.