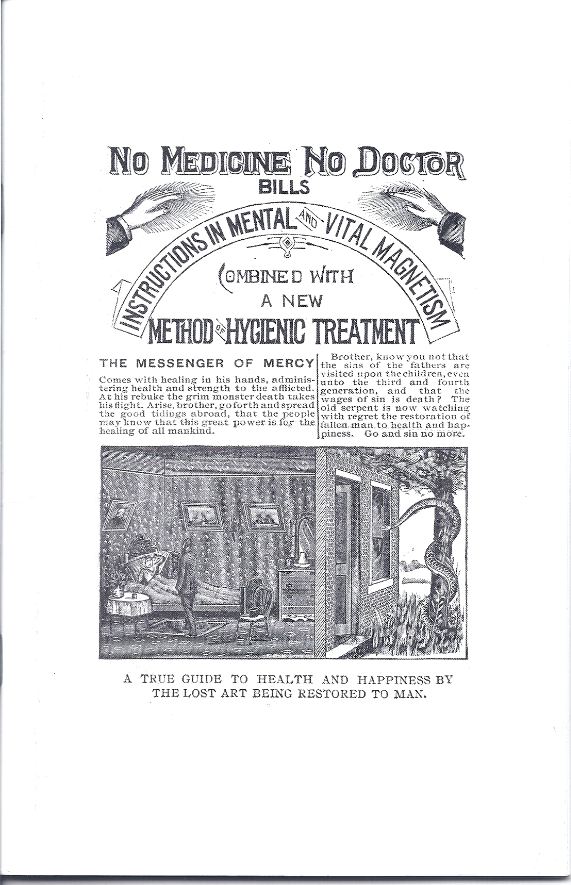 Garrett Scott, Bookseller, has issued his Catalogue 37 (Miscellaneous acquisitions). For those familiar with Scott's catalogues, this one needs no introduction. It is filled with the eccentric musings (some might say insane) of various oddballs who somehow managed to gain access to a printing press. Other works are compendiums of shady merchandising, quack medicine being a specialty. Religious theories abound, often unconventional. And, for balance, there are some rational, reasonable tracts among the lot. Scott's catalogues are always entertaining, and instructive for those who wonder why we still believe the malarkey promoted today by advertisers and politicians. Gullibility is, obviously, a part of human nature. Here are some of these latest acquisitions.

Item 106 contains some theological teachings for children that many people might find a bit unusual. The pamphlet is Lessons for Children of the New Church, by Mrs. Thomazine Wilkins, published in 1837. She talks about some of our planetary neighbors. On Jupiter, she instructs, people “were inexpressibly sweet, and their countenances always smiling. They have a peculiar way of walking. They bend forward, and spread out their hands, almost like persons swimming...” Perhaps that would be necessary to navigate a gas planet, but still, how could she know this? The explanation is that this was a Swedenborgian Sunday school, and among Emanuel Swedenborg's visions was that of life on other planets. Swedenborg believed God would not make planets other than to house life, ergo, there must be life on all of them (and their moons too). Somehow he managed to communicate with these beings. Priced at $125.


Item 29 is an advertising circular for Newton's Earth Cabinet, a product of the Earth-Closet Company. Today we would call such a device a composting toilet, and it would appeal to those sufficiently devoted to the environment to give up water-based flush toilets (I am not one sufficiently dedicated). Of course, in 1871, most people didn't have flush toilets, so this was probably an advance. When the lid was closed, this device would drop the proper amount of soil to cover the waste. The circular contains the appropriate testimonials, such as this from Dr. W. H. Van Buren: “I think the mode in which a civilization disposes of its excrements is even a better test of its civilization than the condition of its lunatic asylums.” I don't know whether to agree or disagree with the doctor. Comparing the disposal of excrement to lunatic asylums as standards of civilization feels like comparing oranges to apples. How do you choose between them? $50.


If you are wondering about that circular on the cover of this catalogue, and the promise of No Medicine No Doctor Bills (who wouldn't like that?), it is a prospectus for a book by Dr. D.J. Smith. Scott describes his book, perhaps somewhat ungenerously, as “a cobbled together volume of quackery.” Dr. Smith promised drugless healing and his patented Eye Cup (to restore sight), all part of some occult forces of nature explained by the mesmeric healer. The book he was pushing was titled Instructions in Mental and Vital Magnetism Combined, and the doctor notes the first edition sold 250,000 copies. Let's hope the rest of his book was more accurate than that claim. Item 89. $150.


This next item is a circa 1872 broadside from Roswell Marsh, who seems simply naïve, rather than crazy. The heading is Hemp – Cannabis – Sativa. Marsh promotes the production of cannabis, noting, “On strong uplands it will produce from 1000 to 1200 pounds to the acre.” Let's see... how much is that worth? On overflowed river bottoms, it might produce a ton per acre. Mr. Marsh was not a Californian promoting medical marijuana. This was, after all, 1872. He was an Ohioan and he apparently wasn't even aware of this alternate use for hemp. He was simply thinking of its use for cordage for the navy. Item 67. $100.


Item 81 is a single leaf presentation by Paul Pawlowski with the provocative caption title, Polyandry is the Answer. Well... doesn't that depend on what the question is? Maybe I don't want to know what the question is if the answer is “polyandry.” Polyandry is where one woman is married to multiple men, sort of the inverse of the standard form of polygamy as practiced by such gentleman as Warren Jeffs. It appears that Pawlowski's reason for men sharing a single wife was so there wouldn't be so many of those annoying women around. He must not have liked them very much. He promotes female infanticide while observing, “Men were free and happy when they were solving their problems by killing off 9 out of 10 women.” Pawlowski proposes buying a house with around seven men who would find “Mrs. Right” to bear them a child or two each, perhaps ten in all. If you are thinking, these people were totally crazy back in the 19th century, this item comes from around 1971. And, Mr. Pawlowski's career with radical and anti-Semitic groups a few years later suggests that he was not joking. Hopefully, he never found a woman to agree to his conditions. $100.


Here is another unusual marriage arrangement explained, though thankfully not one with such violent overtones: Beyond Marriage (published 1914). Author John Veiby, of South Bend, Indiana (home of Notre Dame University, no less) promotes something known as “geometrical marriage.” I don't entirely understand it, but it sounds something like very open marriage, constantly changing partners (or spouses) for brief interludes. The issue for achieving this, to Veiby, is “a problem for architects.” One needs to build the appropriate living arrangements. What he recommends is communal homes, suitable for 50 to 500 people, with windowless “nuptial chambers.” As I understand this, and I'm struggling, a couple would visit one of these chambers for a brief marriage. Privacy being paramount, no one else would know they were getting married. These chambers would have combination locks on the doors, and, again to be discreet, entering one would be described only as “receiving the combination,” rather than holy matrimony. One would receive the combination from the Vestal, or Madame (okay, that latter term is my wording, not Veiby's). I am not aware of any of these residences ever being built, but a very similar type of structure would soon follow. They're called “motels.” Item 95. $225.