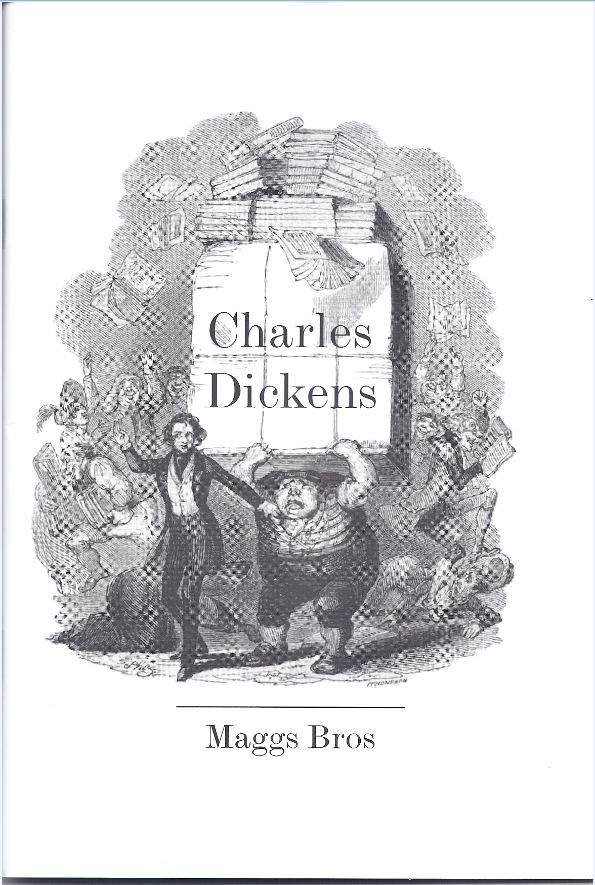 There are few, if any, authors more collectible than Charles Dickens. Perhaps Shakespeare, but none of his works were published during his lifetime, and little beyond the three folios within a century thereof. Dickens published many works, and both their popularity and complexity make him an ideal author to collect. He has never gone out of style, nor out of print, and there are few communities around where you won't be able to catch, at a minimum, a performance of his Christmas Carol before the year is out.

Dickens was noted for characters who were larger than life, partly exaggeration of their attributes yet filled with realism as well. His situations could be exciting, or tense, or ones that left you wondering what would come next. He could also add a certain amount of comedy to serious subjects. However, what is most notable about Dickens' writing is his humanity. His stories are filled with moral lessons, primarily the need to improve the conditions of the poor and downtrodden. There were many of those in Dickens' era, 19th century England, and their conditions were deplorable. Dickens experienced poverty for a time during his youth, and he never forgot the horror, or the unfairness of it. Others might be willing to look the other way, but Dickens was determined to make them see the injustice. It is his humanity that permeates his novels, and though set in a very different time, this is what enables them to retain their appeal today. Settings change, but human values do not.


There is a complexity to collecting Dickens that adds to the challenge. For most authors, you just look for the first editions. It is not so easy with Dickens. He published many of his works in serialization before printing the first complete, bound edition. Compiling the parts has never been easy. Fortunately, there were people who bound together his installments back in the 19th century once they were complete, but this would be the exception. Coming by true “firsts” for Dickens is more complicated than for most authors.


Maggs Bros. Recently published their Catalogue 1452, entitled Charles Dickens. It was formed from the collection of the late John Davies of San Diego. It contains 83 items, all but a handful published in Dickens' lifetime. Maggs has done an excellent job of describing the works, and how they fit in to the complex web that is collecting Dickens. There are a certain number of “issue points” with which to deal for any author, but they are particularly pronounced with a serial publisher such as Dickens. Slight variations, or the ever present differences in advertising pages, add to the challenge of collecting the author. This may seem obscure to those on the outside, but the serious Dickens collector will understand the nuances of issue points that accompany the field. The serious Dickens collector will appreciate this catalogue. Here are a few of the classics offered.


Early in his career, while Dickens was serializing his first novel, The Pickwick Papers, he still found time to publish this hard to find pamphlet: Sunday Under Three Heads. As it is; as Sabbath bills would make it; as it might be made. It reflects the views that would dominate his writing the remainder of his life. Dickens looks at how the Sabbath is celebrated as another example of injustice to the poor. The wealthy go to their churches in their carriages for leisurely, late morning services. The poor are harangued in cramped pews, their one day off of work turned into another joyless day. Under the second head, these people now faced laws to further restrict recreational activities on the Sabbath, assuring it be a day of “universal gloom, bigotry, and persecution.” To Dickens, it should instead be made a day of joy and rest. Item 3, published in 1836. Priced at £1,000 (British pounds, or about $1,583 U.S. dollars).


Dickens' feelings about the Sabbath would be reflected a few years later on the subject of Christmas in what became one of Dickens' favorite stories: A Christmas Carol. As with the Sabbath, he thought Christmas should be a happy time, not one of dour piety. He created perhaps his most famous character in Ebenezer Scrooge, whose greed and selfishness are the epitome of how the wealthy mistreat the poor. Of course, this story has a happy ending, as Scrooge learns how to experience joy from the poor. Were it only so easy! One of these next two items is the first American edition of this Christmas classic, but it is not certain which was released slightly before the other. Item 26 is the Harper & Brothers 1844 edition, a simpler, unillustrated edition that probably reached the press first. £2,000 (US $3,166). Item 27 is the more elaborate Carey & Hart edition, also published in 1844. £5,000 (US $7,917).


Item 66 is one of Dickens' later works, and as Maggs explains, “Great Expectations in original cloth is one of the hardest challenges for the Dickens collector.” Maggs notes that most of the first editions were sent to lending libraries where heavy use required they be rebound. £60,000 (US $95,057).