The American Revolution in Manuscripts from Joe Rubinfine 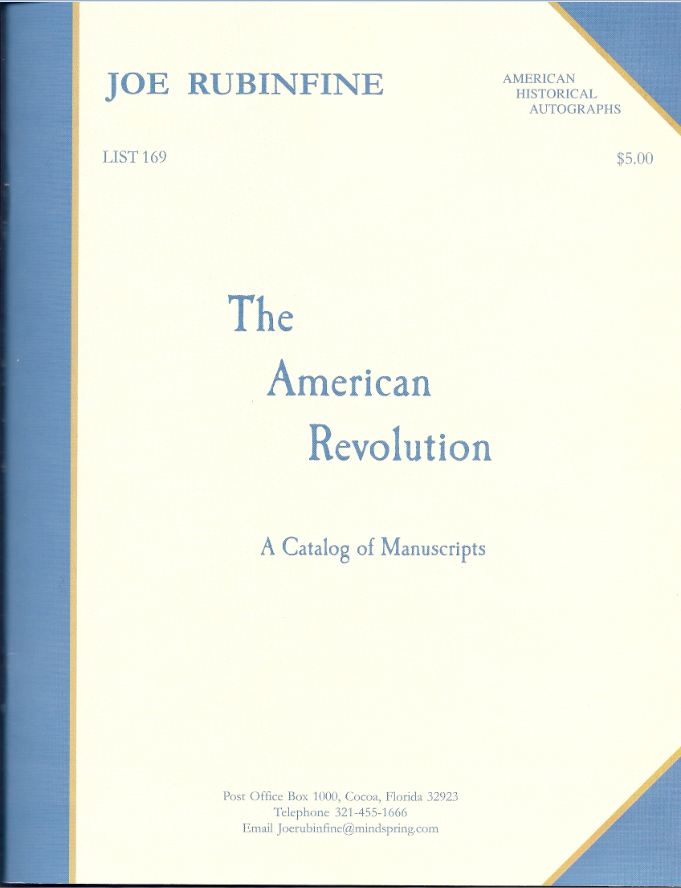 Manuscripts from the American Revolution.

Joe Rubinfine American Historical Documents has published their List 169. The American Revolution. A Catalog of Manuscripts. Manuscripts by their nature are very rare, usually being one of a kind pieces. However, those pertaining to the American Revolution as a category are hard to come by. They were not produced in particularly large numbers, and their high collectibility took many out of the market a long time ago. A selection such as those offered by Rubinfine is not easy to come by. They range from an occasional soldier's letter all the way to those written by George Washington during the Revolution. Along the way, we find many others from the generals and other officers who commanded the troops, and occasionally one from a political or diplomatic figure. This is a catalogue that will be appreciated by anyone who focuses on the American Revolution. Here are a few samples.

Which American Revolutionary War General is best known today besides George Washington? Sad to say it probably isn't Nathanael Greene, Horatio Gates, or similar noted patriotic leaders of that time. The “honor,” such as it is, undoubtedly belongs to Benedict Arnold. He achieved his notability/notoriety for all the wrong reasons. His name, to Americans, is synonymous with “traitor.” Arnold, at one time a brave though difficult commander for the Americans, turned coat for money, passing vital secrets to the British. He was finally caught as he attempted to turn over West Point to the enemy, just managing to escape behind British lines ahead of capture. Item 5 is a pass signed by Arnold on May 8, 1776, when he was still one of America's loyal military leaders during an unsuccessful attempt to capture Canada. From Montreal, he signs a pass permitting one Josiah Blakely, a trader from New Haven, to proceed to Albany. It was a similar pass that Arnold would issue four years later to British spy John Andre in his unsuccessful attempt to cross American lines that revealed Arnold's treachery. $6,500.


Arnold was seriously injured during the unsuccessful campaign in Quebec, but he could have done worse. Item 19 is a letter from General Horatio Gates, sending General John Thomas his orders to proceed to Quebec to lead the American forces. Gates notes that Washington “sincerely wishes you a Pleasant Journey & all imaginable Health & Success...” Washington clearly had no idea what was going on in Canada. Thomas arrived to find only a small, outnumbered, bedraggled force remaining, with smallpox running rampant. He had no choice but to order a retreat. Not only did he not achieve the wished for “success,” he was not able to maintain his health either. Thomas was stricken with smallpox and died on June 2, 1776, a few weeks after his arrival. $17,500.


Benedict Arnold was certainly guilty of treason, but another American suspected of that crime was Nathan Hale. NO! Not that Nathan Hale. This was the other Nathan Hale, an officer from New Hampshire. This Hale had surrendered his small command of soldiers to an even smaller British detachment. Hale had returned home after being placed on parole by the British after his capture. He was then taken into custody by the Americans. In this letter from 1777, Goose van Schaick, an American officer, writes General Gates, “As the charge against the Colo. is of the highest nature, Viz high Treason I have tho't proper to confine him in the Fort, where he will remain, 'till your further Pleasure is known...” Evidently, Gates must have forgotten about Hale as no further action was taken against him. Ultimately, under the terms of his parole, Hale returned to his British captors and died there three years later. Item 55. $1,500.


Item 42 is another permission slip, sort of an excused absence from his Pennsylvania regiment granted a Lieutenant Wallace. The permission comes from “Lord Stirling,” as General William Alexander was known. It was signed by his 17-year-old volunteer Aid de Camp. It is one of the earlier signed documents available from the the young man. It is signed “Jas. Monroe Aid de Camp.” It was signed in 1778. Just under four decades later, James Monroe would be elected President of the United States, the last of the revolutionary generation to serve in that office. $6,500.