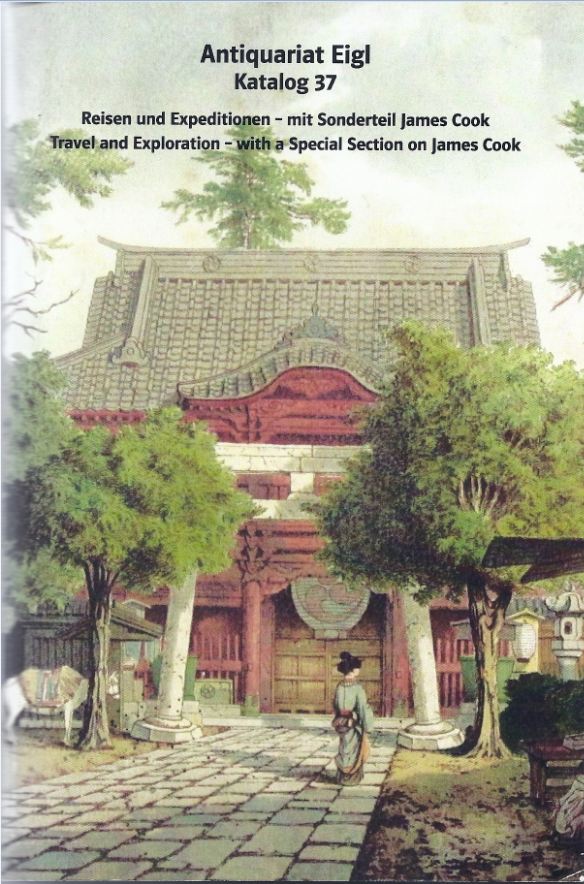 Antiquariat Eigl has released Katalog 37. Travel and Exploration – with a Special Section on James Cook. The catalogue is published in German, but an English translation is available on the bookseller's website. It is filled with accounts of 18th and 19th century explorations, with almost a third of the items related to the three voyages of Captain James Cook. While the majority of the works are in the German language, there are many in English and other tongues as well. Some of the German items were written by German explorers, though often serving on expeditions by other countries. There were not many German promoted explorations during most of this time. Other books are first German editions of travel books originally written in other languages. For collectors with a focus on travel and exploration, Antiquariat Eigl has presented a catalogue you will want to see.

Captain James Cook would become perhaps the most admired and popular Britain among his countrymen of the 18th century. However, he had his opponents, particularly early on, as this article within the The Westminster Magazine from 1773 attests. It is a Review of Dr. Hawkesworth's Account of the late South-Sea Voyages. The claims made herein are remarkably similar to those expressed by Alexander Dalrymple, the first Royal Hydrographer, who had hoped to receive the command of the voyage that was instead given to Cook. Dalrymple generally leveled his criticism at Hawkesworth, who wrote the official account of Cook's first voyage and made some errors, but he may have directed his attacks at Hawkesworth because Cook was too popular. The writer of this article, while focused on Hawkesworth, levels some serious implications against the integrity of Cook himself. Dalrymple and others believed there was a massive southern continent, and when Cook came back with no evidence of its existence, at least some believed Cook deliberately avoided confirming their theory. The writer claims that it seems that Cook had secret instructions “to discover, not the Continent itself, but facts to controvert or disprove the notion of its existence.” He continues, “Our circumnavigators came back just as wise as they set out … It appears, at least, highly probable to us that the Captain declined the search, at the very time when he had reason to think he was nearest to the object of it.” Of course, Cook did no such thing, and on his second voyage sailed deep into waters that were located where the theory said there would be land. There was no such huge continent. Item 11. Priced at €480 (euros, or about $630 in U.S. Dollars).


On his second voyage, Cook came back with more than knowledge about continents and islands. He came back with a person, a native of one of the Pacific islands. His name was Omai (or just Mai), and he became the toast of London. He was the epitome of the “noble savage.” Item 14 is a two-volume set from 1830 by George Colman “the Younger” entitled Random Records. It includes an amusing account of a journey into the countryside with Omai, naturalist Joseph Banks, explorer Constantine John Phipps, George Colman “the Elder” and “the Younger” (at the time 12 years old). Colman recalls that when they reached the coast, “Omai, asked little George, back, swim, I, me, carry you.” He proceeded to put the young man on his back, and despite the latter's fears, “my wild friend appear'd as much at home upon the waves as a rope-dancer upon a cord.” He noted that “Omai cooked chickens in the traditional Tahitian manner in a hole in the ground,” and though the Tahitian would have preferred dog, Omai's chicken was still much better than Banks' barbecued hog. “...[N]othing could be better dress'd, or more savoury...” €2,900 (US $3,812).


Speaking of Omai, here is what could be a uniquely important item related to the 18th century visitor. It is a letter written by an unknown third person on Omai's behalf. It states, “Mr. Omai presents his Compliments to Mr. Pigott, & if in town intends doing himself the Honor of waiting on Mr. Bosville on Thursday next.” A couple of other letters in this hand, written on Omai's behalf, are known. However, this one is unique. It has the islander's name written in what Antiquariat Eigl believes is his own hand. If so, it is the only signature of Omai known to exist. He did learn to read and write, not well, but passably. This signature is in a different hand, and it is in the handwriting of someone not very experienced at it. The “o” is not capitalized, “a mistake a person experienced in writing would never make,” Eigl points out. The bookseller concludes, “Most probably this is Omai's own handwriting... This document...may therefore well be the only one existing with a specimen of Omai's handwriting!” €75,000 (US $98,593).