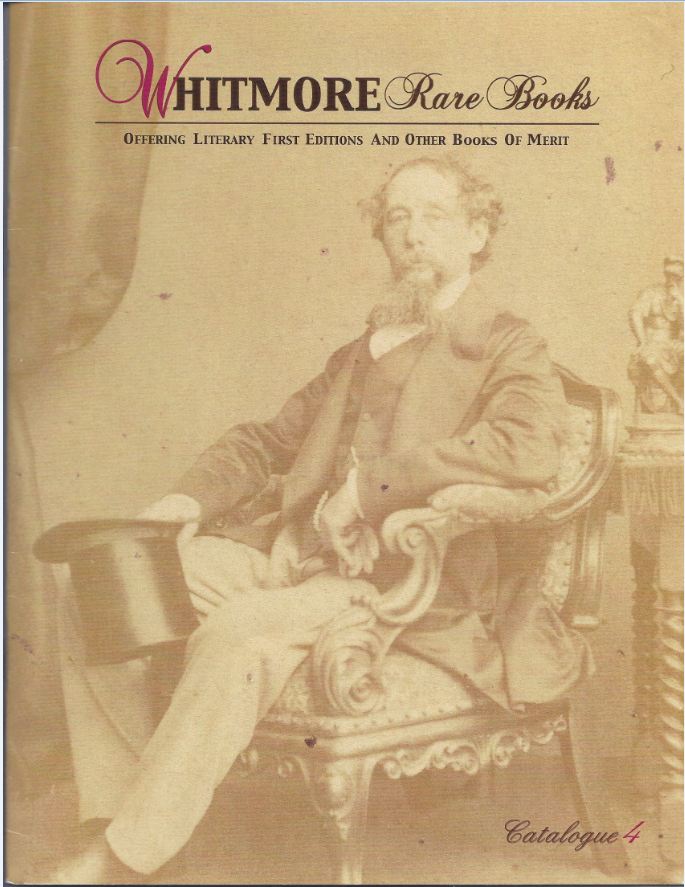 Charles Dickens on the cover of Whitmore's Catalogue 4.

This month we received our first catalogue from Whitmore Rare Books of Pasadena, California. Whitmore Rare Books is operated by Dan Whitmore, one of many in the trade who made the transition from collector to bookseller. It explains why booksellers generally appreciate the goods they sell in ways not often seen with general merchants. As the Whitmore website explains, “We were raised on great books, as essential to us as bread, and we seek to share that passion with anyone of like mind.”

Whitmore describes its mission as “offering the most important books of the last five centuries in uncompromising condition.” Its major focus is on literary first editions and other “books of merit.” Condition is usually exceptional for a book's age, many described at least as “near fine,” with dust jackets in unusually good shape as well. This latest catalogue, Whitmore's Catalogue 4, lives up to these expectations. Here are a few samples of what we found within its pages.


We will start with one of the all-time favorite books among both children and adults, not an easy double to reach. When Charles Lutwidge Dodgson, better known by his pen name of Lewis Carroll, wrote what became Alice's Adventures in Wonderland, it was really meant to be read by a few children he knew. It was far too good for just that. Lewis' book was taken to Macmillan in London, illustrations were entrusted to John Tenniel, and in the summer of 1865, the pages were printed for binding. Forty-eight copies were bound and given out when Tenniel, displeased with the printing quality of his illustrations, called a halt to the process. The distributed copies were recalled, and all printing halted until the quality could be made satisfactory. Meanwhile, Macmillan retained pages for 1,952 inferior copies. What do you do with them? The answer was easy. Ship them off to America where they won't notice the difference. Item 16 is a copy of that edition, variously described as the first American edition, first edition second issue, or second edition. The British first is practically unknown, making this the first obtainable edition. Priced at $8,000.


Item 5 is a masterpiece for collectors of Oscar Wilde, the premier edition of what is generally considered his greatest work, The Importance of Being Earnest. It is a farce, a comedy where important things are treated as trivial, and vice versa. When it first opened in the London theater in 1895, it met with critical acclaim, and yet it did not run for long. Wilde's personal issues, notably homosexual encounters, were not helpful in that era. Wilde would get embroiled in legal conflicts, end up in jail, and exile. He never wrote another comedy or drama. Offered is the signed, limited, first edition of 1899, one of just 12 copies in a full vellum binding and vellum pages. $55,000.


Item 10 is a thorough collection of the works of one of America's first important novelists, James Fenimore Cooper. Noted for his tales of the frontier, Cooper's books were well-received not just in America, but Europe and other lands where they were translated to many languages. Offered is a set of the 33-volume Author's Autograph Edition of Cooper's works, published from 1895-1900. That may sound odd. How could there be an author's autograph edition when Cooper died almost 50 years before it was published? The answer is that it includes a page of text in Cooper's hand, 44 lines with corrections from his 1848 book Oak Openings. $17,500.