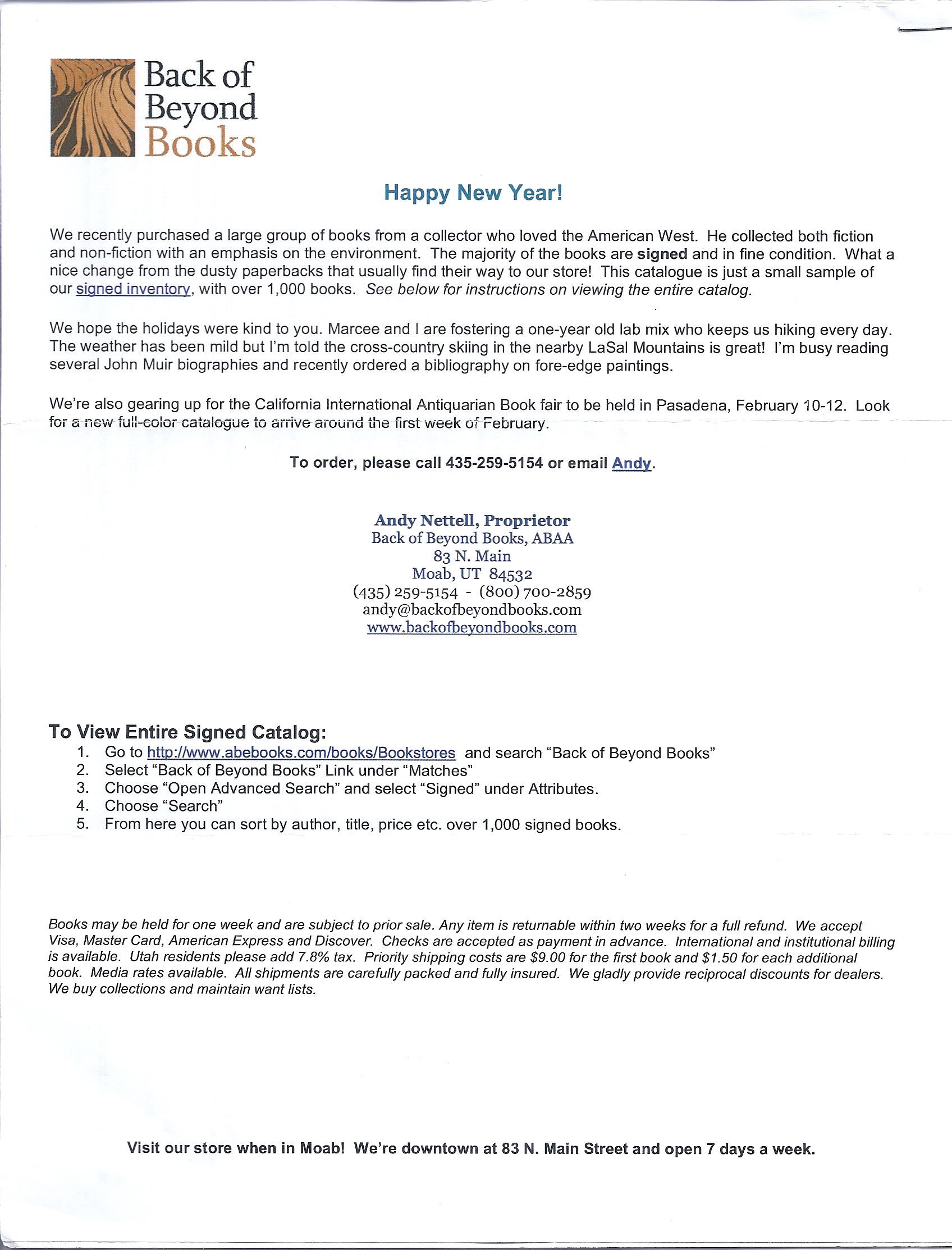 A collection from a Western collector.

Back of Beyond Books has issued... not quite a typical catalogue. It comes with the heading Happy New Year!, but we believe this is more a salutation than a title. Inside, there are listings with brief descriptions, rather than the typical more detailed, illustrated offerings. Back of Beyond promises a more standard catalogue will be on its way next month.

For now, this is a selection of a large group of books recently obtained from a collector. It is focused, like Back of Beyond, on the American West, and includes both fiction and non-fiction. Most of the books are signed and are in fine condition. This is a substantial collection, and most of the books are appropriately priced for collectors of any financial means. Here are just a few of these newly acquired works.


The Lone Ranger and Tonto Fistfight in Heaven is a collection of short stories from Native American writer Sherman Alexie, drawing on his own experiences. Published in 1993. $35.


Next is number 85 of the 250-copy 1985 tenth anniversary edition of Edward Abbey's most noted work, The Monkey Wrench Gang. This tale of resistance at the time of the building of the Glen Canyon Dam is signed by Abbey and includes a laid-in signed print by R. Crumb. $1,100.


Here is a mystery tale by Brad Dimock, published in 2001: Sunk Without a Sound: The Tragic Colorado River Honeymoon of Glen and Bessie Hyde. The newlywed Hydes set off down the Green and Colorado Rivers in 1928. Glen hoped to set a speed record running through the Grand Canyon, and Bessie hoped to be the first woman documented to have made the trip. They are known to have made it to the Grand Canyon, as they hiked up the Bright Angel Trail and had their pictures taken. That was the last anyone saw of them. Their boat was later found, but no trace of the Hydes was ever located. Most believe they were swept away by the rapids. $60.


Andrea Peacock published an unhappy story about a small, rural town in 2003: Libby, Montana: Asbestos & the Deadly Silence of an American Corporation. Mining of asbestos began in the early part of the 20th century in Libby, when everyone thought the substance was an excellent fire retardant with no downside, but as it became more and more obvious that the substance was killing the people of Libby, the mine owner seemed more interested in protecting itself than the townspeople. $25.


Here is a crime-related story: Butch Cassidy, My Brother, by Lula Parker Betenson. Cassidy's real name was Robert Leroy Parker. Most people believe that the famed gunman was gunned down in South America in 1908, but Mrs. Betenson maintained that he came to a family reunion in 1925 and lived until 1937, though she did not see him again. Her book was published in 1975, and if you are wondering why the sister of a man most believed died in 1908 was still writing books in 1975, she was 18 years younger than “Butch” and lived to be 96. $50.


It may not be obvious, but postcards can tell us a lot about history. These are the images people would send home to friends about the places they visited, back in the day when postal mail was the major form of communication. Charles Harbert prepared a limited edition (250 copies) book in 2006 entitled Colorado History...Insights and Views Through Postcards. $150.


Next we have Murder City: Ciudad Juarez and the Global Economy's New Killing Fields, a 2010 book by Charles Bowden. The “global economy” that runs through Juarez, sadly, is the drug trade. As an aside, you can stand in El Paso, which justifiably advertises itself as the safest city in America, and look across the Rio Grande at Juarez, probably the most dangerous city in the Western Hemisphere, where murders go on every day at a frightening pace. It is hard to understand. $50.