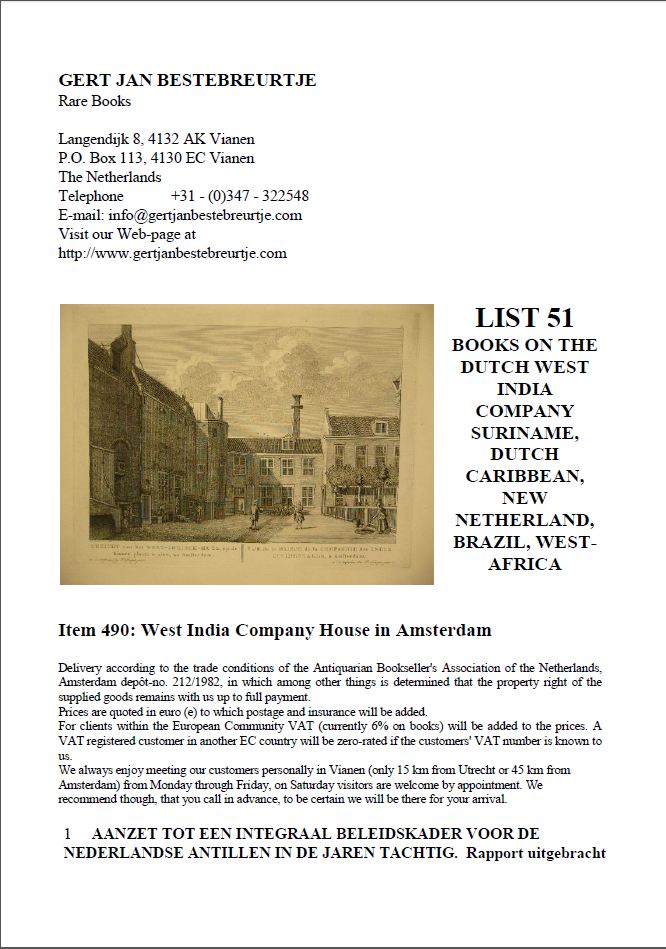 Books with a Dutch connection.

Gert Jan Bestebreurtje Rare Books has published their List 51 Books on the Dutch West India Company, Suriname, Dutch Caribbean, New Netherland, Brazil, West Africa. For those not familiar with the term, New Netherland consisted of a good part of what would become the original boundaries of the United States. It ranged from southern New England to Delaware, and penetrated at its deepest point inland near the head of the Hudson River, near current day Albany. The capital of this colony was New Amsterdam, or as it has been called since captured by the British, New York. The colony had a run of about 50 years before the British decided they wanted all of Atlantic North America, and the Dutch lacked the power or will to defend it. Dutch settlers negotiated a recognition of their liberties, and the colony fell to the British in the 1660s and 1670s. Still, much of the area remained inhabited by Dutch settlers who left their mark, and their names, such as “Roosevelt,” as a monument to their brief rule. We will take a look at some of the items in this catalogue with a particular focus on New Netherland.

Here is a look at how some of those Dutch settlers at the heart of what once was New Netherland lived: Pre-revolutionary Dutch houses and families in Northern New Jersey and Southern New York. This book recounts the lives and homes of early settlers around New Amsterdam, including genealogical information about the families. The book was written by Rosalie Fellows Bailey, and was published in 1936 by the Holland Society of New York in a limited edition of a very devilish 666 copies. It contains an introduction by one of the best known scions of the Dutch settlers, Franklin D. Roosevelt. Item 11. Priced at €350 (euros, or approximately $457 in U.S. currency).


Item 72 is an in depth look at some of the early Dutch families who settled a bit north of New Amsterdam: First record book of the 'Old Dutch Church of Sleepy Hollow' organized in 1697 and now The First Reformed Church of Tarrytown, N.Y. In 1901, the Yonkers Historical Society translated the registers of this church from its beginning through 1791 and published them in this volume. It includes the complete records of its members, baptisms, marriages, etc. Limited to 500 copies, the introduction notes, “This reproduced volume will be of priceless worth to descendants of old Westchester County families...” Priced (anyway) at €175 (US $228).


The Dutch may have been the first European settlers to enter this region, but they were hardly the first inhabitants. The Lenape, or Delaware Indians had already been there a long time, the result being a struggle for the land. The Dutch often made purchases of the land, such as the famous purchase of Manhattan for the equivalent $24 and some beads, but the deals were not always fair, or recognized by all of the Indians, leading to skirmishes that continued even after the American Revolution. Item 324 is an account of The Dutch-Munsee encounter in America, by P. Otto, published in 2006. The Munsee were an offshoot of the Lenape that inhabited the Hudson Valley, the area explored by Henry Hudson, looking for a water route to Asia on behalf of the Dutch East India. In time, the Munsee would be ravaged by smallpox and other diseases brought over from Europe, and pushed from their lands by the Dutch and then the British. Groups do still survive, primarily in Ontario, but also among other tribes in Wisconsin and Oklahoma. €45 (US$59).