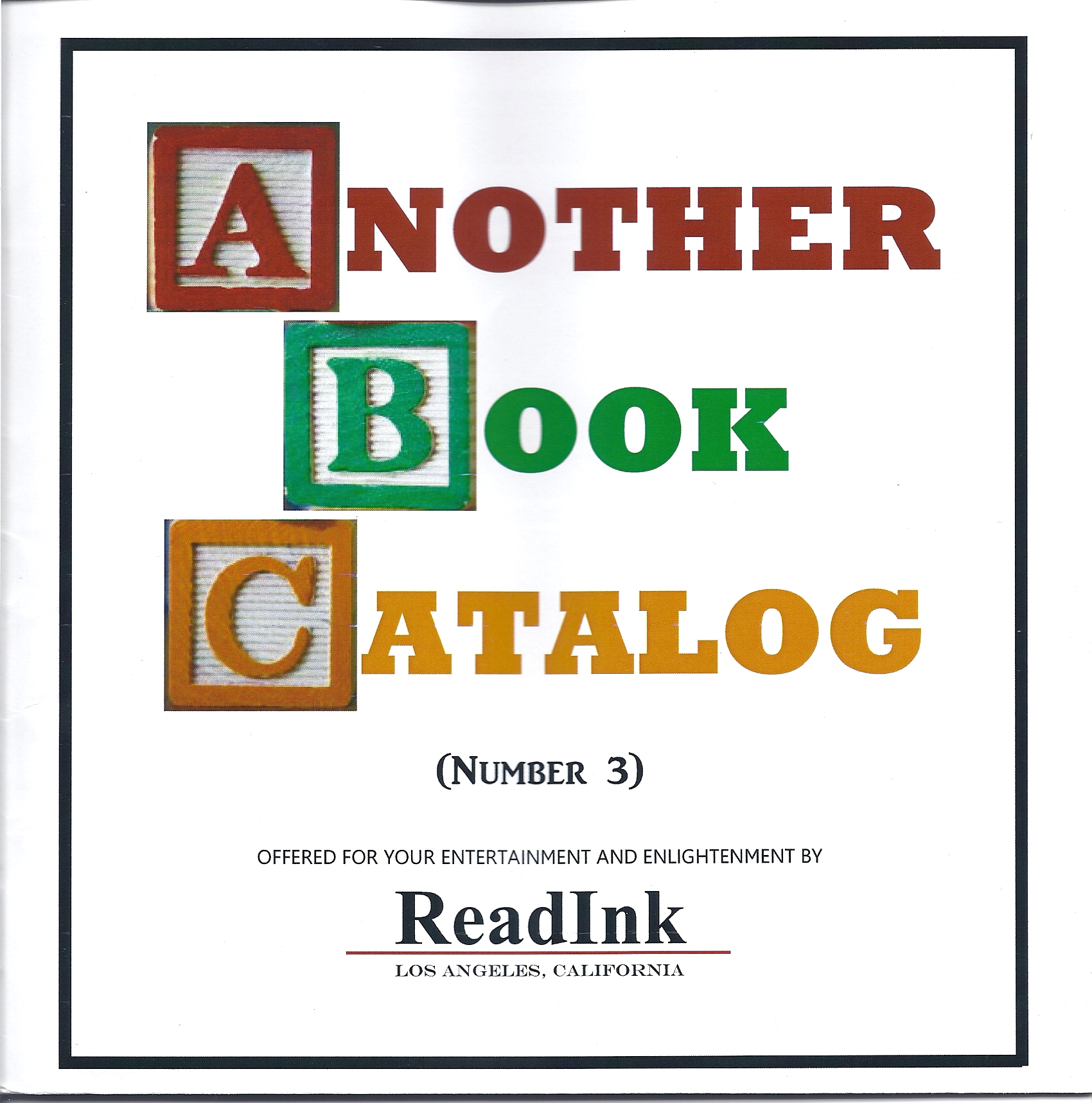 ReadInk of Los Angeles has issued Another Book Catalog (aka Number 3). As the cover image will quickly reveal, that title contains the initials ABC. This is an ABC, or alphabet book, though not one designed for the young folk. Among the letters, we find “B” is for “booze,” “D” for “deranged,” “H” for “homicide,” “V” for “vanity.” This is a collection of works often unusual, uncommon, deservedly or undeservedly forgotten, a cross-section of American writing from the early to middle of the 20th century. As in any era, a few works emerge as classics, and similarly you will find some that are well regarded today, though it may be the items that were popular in their time, but not ours, that are the most interesting. Indeed, if your great-grandchildren someday want to learn about the doings of the Kardashians, the American Idols, or why we were so concerned about gay marriage, some future ReadInk catalogue will probably be the source for their answer. This is who we were... and are.

We will start with one from the “B is for booze” category. The title of this 1935 gem edited by Sterling North and Carl Kroch is So Red the Nose; or Breath in the Afternoon. You might think from that title this is a temperance tome, but that is hardly the case. Instead, it is a cocktail recipe book, with the recipes purportedly supplied by many of the great writers of the day. These gentlemen needed no designated writers to turn out their masterpieces. Of course, you would expect Ernest Hemingway to be included, and you would not be disappointed. Others might not have been as evident, but there are contributions from Edgar Rice Burroughs, Erskine Caldwell, Alexander Woollcott, Rockwell Kent, and Theodore Dreiser. Some are tongue-in-cheek, or at least we hope so, since Dreiser's “American Tragedy Cocktail” includes gunpowder, nitroglycerine, gasoline and a lighted match. Don't try this at home, kids. Priced at $400.


From “C is for cowboy” we have the autobiography of the first major movie cowboy, William S. Hart. Hart was no singing cowboy, since he mostly starred in silent films, but he spent many of his early years roping and whatever else cowboys do in the Dakotas. Nonetheless, the title of Hart's 1929 book is My Life East and West. That's because Hart was born in Newburgh, north of New York City, hardly a western address. Actually, George Washington spent the early days of the Revolution there too, but it was a much tougher town in Hart's time than Washington's, when all he had to worry about were Redcoats. Newburgh, New York, is the Wild East. Hart would move on to Hollywood, where he parlayed his experiences into film stardom. He has inscribed this copy to his frequent co-star Jane Novak, with the comment “Scrub damn you scrub.” Presumably, this is a line from a film or some other in-joke. $600.


Next we go from a Hollywood cowboy to a Hollywood call boy. From “Q is for queer” we find the obsession with homosexuality was even greater in the last century than it is today. Much more so. Even attempts to be sympathetic in those days had to treat it as some kind of horrible derangement, to be pitied if not condemned. This 1967 paperback is entitled I am a Hollywood Call Boy, by Mark Shelby. “What sex AM I?” asks the protagonist. “I sell my body to the highest bidder – man, woman, faggot, lesbian, switch-hitter – or what have you! I commute from Sodom to Gomorrah. The sadists, the masochists, the voyeurs, the fetishists, the multi-perverts – I know them all – and they know me...and you can say that again!” I won't, because of space limitations, but you get the drift. This is not great literature (and you can say that again!), but it reflects its era as well if not better than the more notable works of the 60s. $50.


“I is for Incorporation,” and if corporations are people, this one is a very bad person. From 1949 we find E.E. Rice's book about that most infamous of “corporations,” Murder, Inc. Described as “The hair-raising story in pictures of America's bloodiest crime ring,” this book is filled with photos of notable criminals, on the streets, at trial, being arrested, occasionally dead or dying. You will get to meet all those legendary personalities whose names are associated with criminal enterprises of the day – Al Capone, Legs Diamond, Dutch Schultz, Frank Costello, and Lucky Luciano. If you want to invite these characters into your home, it is best to do so through pictures. $65.