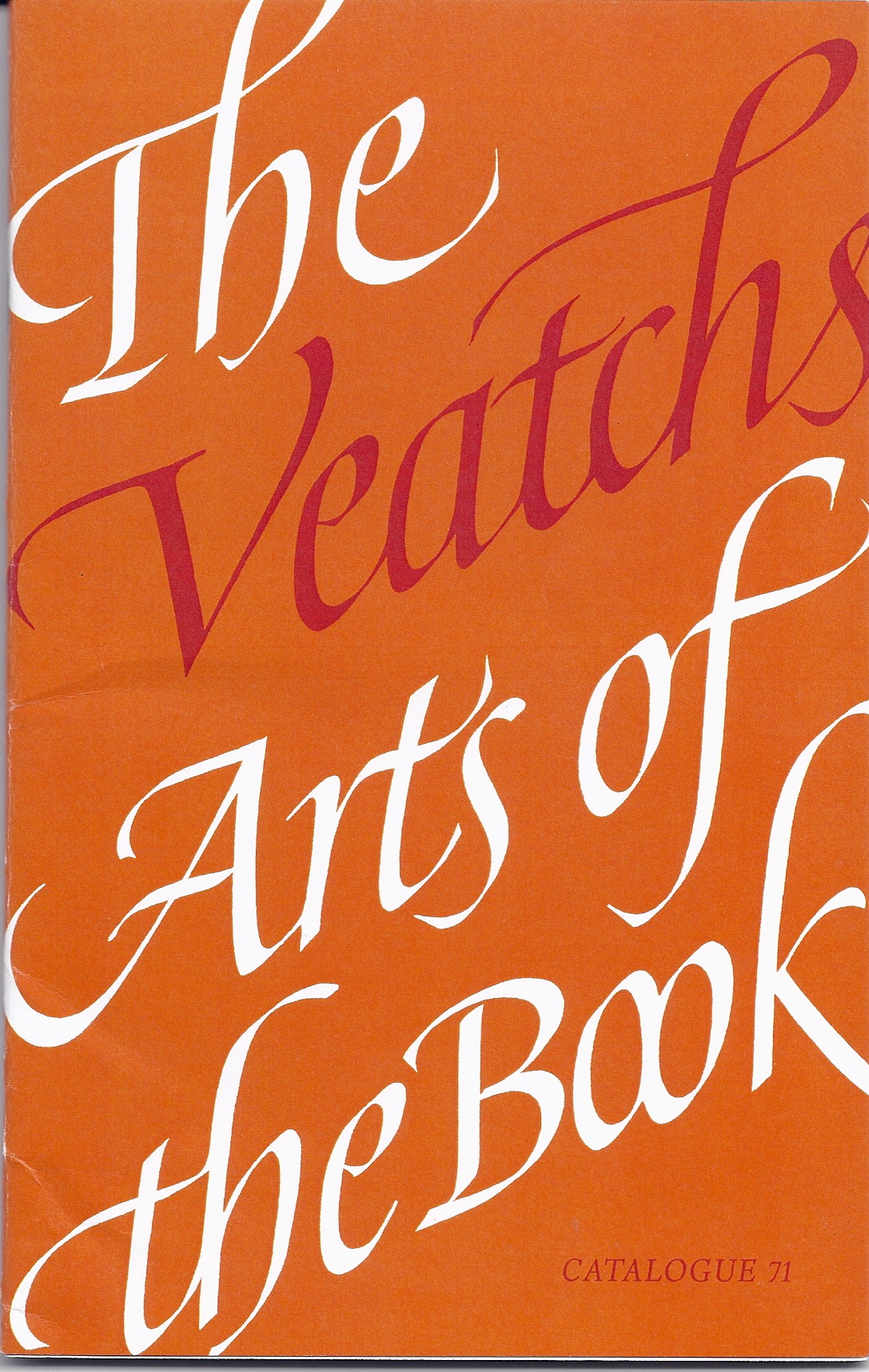 The 71st catalogue from The Veatchs Arts of the Book.

The Veatchs Arts of the Book has issued a new catalogue, Catalogue 71 for the Northampton, Massachusetts, bookseller. The Veatchs are focused on books as works of art, which includes such fields as private presses, fine binding, highest quality printing and paper, and similar attributes. The subtitle of this catalogue explains what is offered with more precision: Recent Acquisitions including Binding, Exotic Types, Color Printing, Fine Press Books, Decorated Papers, The Pennyroyal Press, Stamperia del Santuccio.

Pennyroyal is the press of artist and illustrator Barry Moser. One of the greatest illustrators of his generation, Moser set up Pennyroyal to print artistic books featuring his illustrations. Forty years after its founding, the work continues, and Moser's name is certainly legendary in the field. However, I will have to admit to being stumped by Stamperia del Santuccio. Stamperia del Santuccio was the name for the press of Victor Hammer. Hammer was born in Austria, and as a young man his interests were in architecture and art. At the age of 40, he moved to Italy, where he began designing type and opened his press (hence its Italian name). In the 1930s, he returned to Austria to teach, but after the Nazis took over, he moved to America. He taught at Wells College in upstate New York, but reaching retirement age, he accepted an artist-in-residence position at Transylvania College in Kentucky. He reestablished his Stamperia del Santuccio, explaining why it has a second life of books published in America, and he remarried Carolyn Reading (Hammer) of the Anvil Press. Now, with that brief explanation, we will move on to the catalogue.


Item 110 is one of those pieces from Stamperia del Santuccio's second incarnation: Some Fragments for C.R.H. (Carolyn Reading Hammer), published in Lexington, Kentucky. It is an account written by Victor Hammer of his early life and career in Europe, and set by Hammer in his type. Published in 1967, and printed by Carolyn Hammer, it was Victor's last book. He died a short time later. Priced at $750.


From the previously mentioned Pennyroyal Press, item 89 is their edition of The Wonderful Wizard of Oz. Barry Moser undertook several major printing projects between 1982 and 1985, his version of the Wizard being the last in this sequence. He has used different colors for running titles, opening initials, and page numbers to show the evolution of the storyline. They move from blue to green to red and finally grey as the story returns to Kansas. This copy comes with a laid-in pencil sketch of the Scarecrow. $3,500.


Item 6 takes us back earlier, to the Ashendene Press of Charles Henry St. John Hornby. This private press operated from 1895-1935 in Chelsea, England, averaging a book a year. This book was published in 1903, though it dates back over four centuries earlier: The Treatyse on Fysshynge with an Angle (they liked to use more Y's back then). This came from a book supposedly written by Dame Juliana Berners, supposedly born around the late 14th century. We use a lot of “supposedlys” here as no one is certain she wrote it, or even who exactly she was or for certain whether she existed. A brief attribution to her and there being a Berners family (though a Juliana is uncertain) is about the extent of the evidence. Ashendene has re-cut woodcuts from the 1496 edition by Wynkyn de Worde (who also liked Y's). $2,000.


Item 26 is Typographia Naturalis, by Roderick Cave and Gregory Wakeman, from the Brewouse Press, 1967. The book includes two original specimens of nature printing, one being a leaf from the Nature-Printed British Ferns by the master of the technique, Henry Bradbury. This is sort of a leaf of a leaf. $400.