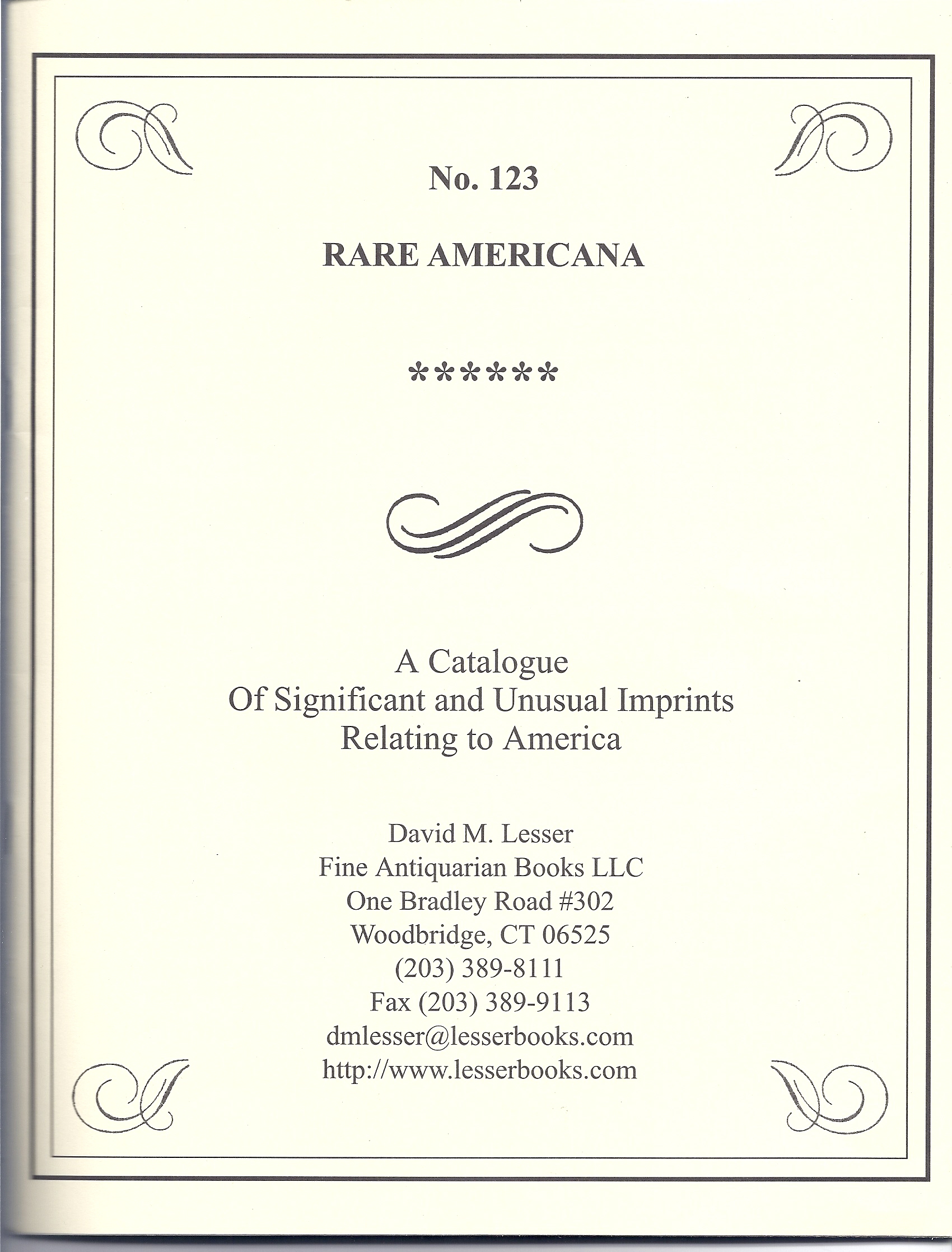 David M. Lesser Fine Antiquarian Books has published their catalogue number 123 of Rare Americana. This latest selection includes 150 items, generally shorter form printed documents (and a few in manuscript), most of which relate directly to issues of 18th and 19th century America. A few are indirectly related, such as political debates in England which touched on issues in America. As typical of shorter form work, most items touch on an issue of the moment, rather than a look back in time. They put America just as it was in its earlier days on display. Here are a few samples from the catalogue.

Item 2 is John Adams' Twenty-six letters, upon Interesting Subjects, Respecting the Revolution in America. The letters were written by Adams in Holland in 1780, intended to explain the revolution to the Dutch and obtain financial and other assistance from them. These letters were first printed, but not published in 1786, and then again in 1789 (this issue), as they were offered to subscribers, but not to the general public. In his letters, Adams traces the outbreak of problems between England and the American colonies not to the Sugar and Stamp Acts of 1764-65, but earlier to the Writs of Assistance of 1760. These writs allowed authorities to search people's belongings without cause or redress. Colonists had been smuggling goods from countries other than England as this was cheaper, thereby evading British taxation and control of the trade. While not a major issue through most of the colonies, it stirred notable anger in Adams' Massachusetts, which would become the hotbed of the Revolution as the litany of indignities increased. It is interesting to see the anger building so early, as 1760 marked the winding down of the French and Indian War, where the British and the American colonists worked together to defeat their common enemy, the French. Priced at $6,000.


It would take just over a decade for the dispute to turn into violent confrontation, and by May 29, 1776, when A Sermon Preached Before the...Honorable House of Representatives of the Colony of Massachusetts-Bay was delivered, the colonies were on the verge of declaring their independence. Arguing their right to overthrow tyrannical rule that day was Samuel West, an influential Congregationalist minister from Boston. While acknowledging a general need for the people to submit to the rule of government, he goes on to say, “When a people find themselves cruelly oppressed by the parent state, they have an undoubted right to throw off the yoke, and to assert their liberty.” West would go on to help write the Massachusetts constitution and be a delegate from that state to the federal constitutional convention. Item 138. $1,000.


Item 24 is a Review of the Life of Gen. Sam Houston... By D.G. Burnet, First President of Texas, published in 1852. If you think this is a paean to the life of the great Texan, you are totally mistaken. Burnet, who served as the first (interim) President of the Republic of Texas in 1836, and again in 1841, was a bitter enemy of Houston. Burnet negotiated the treaty with Santa Anna after he was captured at San Jacinto, where the Mexican leader agreed to recognize Texas in return for his freedom. Many Texans were unhappy, instead wishing Santa Anna to be executed, and they must have felt even worse when Santa Anna went back on his word. For whatever reason, Burnet and Houston hit it off poorly. Burnet found Houston crude, the latter thought Burnet bossy and argumentative. The relationship worsened over the years, Burnet twice challenging Houston to a duel (Houston wisely declined the invitation). In 1841, the two ran against each other for President of Texas in a campaign filled with personal attacks. Houston won easily. Eventually, Burnet sought his revenge by publishing this book about Houston, which tears the early Texas leader apart. Time did not heal these wounds. $4,500.


Item 63 is William Griggs' The Celebrated “Moon Story,” Its Origin and Incidents... published in 1852. It recounts a hoax from 1835 that evidently had a lot of people fooled. Richard Adams Locke, writing in the struggling New York Sun, described the discovery of odd life forms inhabiting the moon. There were upright walking beaver-like creatures, small reindeer, horned bears, and the “Vespertilio-homo,” a flying bat-man. Locke gave credence to his story by claiming the discoveries were made by the noted astronomer, Sir John Herschel, using a new high-powered telescope. Herschel knew nothing of the claims. While the stories did nothing to promote accurate journalism, it did wonders for the Sun, whose circulation increased fivefold. $450.