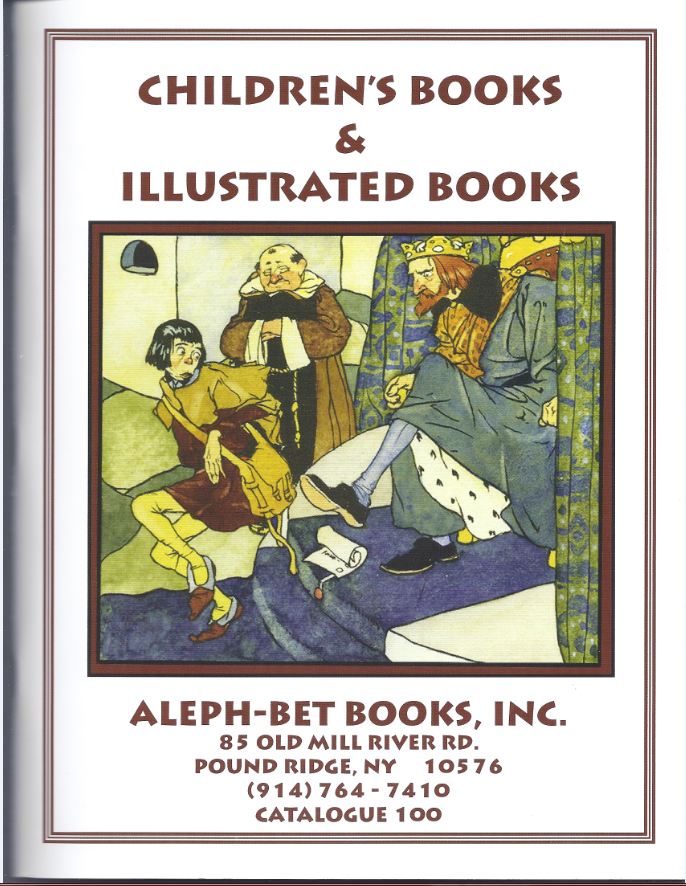 The one hundredth catalogue from Aleph-Bet Books.

Aleph-Bet Books has reached a milestone. The Pound Ridge, New York, specialist in children's and illustrated books recently released their Catalogue 100. The format of their catalogues has been the same, at least for quite a while now. They offer 600 items, profusely illustrated with color photography, overwhelmingly both for children and illustrated. There are few catalogues quite as much fun to peruse. As adults, our tastes and interests diverge widely. As children, we all are entranced by the world of make-believe, whether that be talking animals, mystical lands, heroic adventures, or wizards and magic. Everyone likes children's books, whether child or not. Here are a few of this latest six hundred.

Item 51 is an unusual title for “Oz” author L. Frank Baum. Naturally, Baum is far and away best known for his Oz books, but he wrote many other books and series. However, outside of various fairy tales, he used pseudonyms for these other books so as not to interfere with his major works. After the release of The Emerald City of Oz in 1910, it was announced that the series would be discontinued. That freed Baum to use his name on other books he wrote. In 1911, Baum published the work here offered, The Daring Twins, under his own name. It is a mystery, amateur detective type of story, where 16-tear-old Phoebe Daring sets out to prove her brother, Phil, was falsely accused of thievery. The series was intended to appeal to both boys and girls in the 12 to 18 range, and using Baum's name was hoped to capture young people who had read the Oz books as children. There was a follow-up to this tale published in 1912, Phoebe Daring, and Baum wrote a substantial portion of what was intended to be the third book in the series. However, as finances became tight for publisher Reilly & Britton, it was decided to return to the proven best sellers, and by 1913, Baum was writing Oz books again. Priced at $500.


Here is another book with an Oz connection/non-connection. After the death of Baum in 1919, it was decided to keep the series going. Ruth Plumly Thompson was selected as “Royal Historian of Oz,” or perhaps we could simply refer to her the new author. Thompson would go on to produce 19 more Oz books between 1921 and 1939, five more than did Baum. She had only published one book prior to her appointment as Royal Historian, and wrote only two non-Oz books during her years producing the 19 Oz titles. John R. Neill was even more tied into the series than Thompson. Neill was an illustrator who took over the task of illustrating the books after the first in the series (The Wonderful Wizard of Oz). He drew the illustrations for the final 13 titles written by Baum, and was considered for the position of writer as well after his death. However, when that role was given to Thompson, he continued to illustrate the series, including all 19 of Thompson's titles. After Thompson's retirement, Neill finally took over the writing, writing and illustrating the next three titles in the series from 1940-42 (Neill died in 1943). However, Thompson and Neill collaborated on one non-Oz book, the second of two non-Oz books produced by Thompson during her tenure as Royal Historian. Item 527 is a copy of that collaboration, Curious Cruise of Captain Santa, published in 1926. It is a Christmas fantasy. $850.


Item 329 is a copy of a children's book beloved throughout the land and even the world, but most particularly in Massachusetts. Indeed, it is the official children's book of the state. It is the classic Make Way For Ducklings, written and illustrated by Robert McCloskey. The book is highlighted by the trip of Mrs. Mallard, leading her eight ducklings, from the Charles River to Boston's Public Garden. The Boston police provide the necessary escort, stopping traffic along the way, so the family is able to safely make the trip to their new home. The ducklings have become celebrated heroes in the city, almost like its revolutionary patriots. In fact, a statue of Mrs. Mallard and her eight children was erected within the Public Garden. Offered is a 1941 first edition of McCloskey's duck tale. $18,500.


You are probably familiar with Dorothy Kunhardt's notable touch book Pat the Bunny. You may have a copy in the attic, though probably not a first edition. Item 302 is Kunhardt's follow-up, The Telephone Book. No, this is not one of those big books full of numbers dinosaurs used to use before you could look up numbers online. It is a book with movable parts celebrating that black thing with a hand dial that used to be plugged into everyone's wall. The handset can be lifted to make a “call,” and the book instructs youngsters to say, “Hello?” Unfortunately, it does not tell them how to send text messages. $1,200.