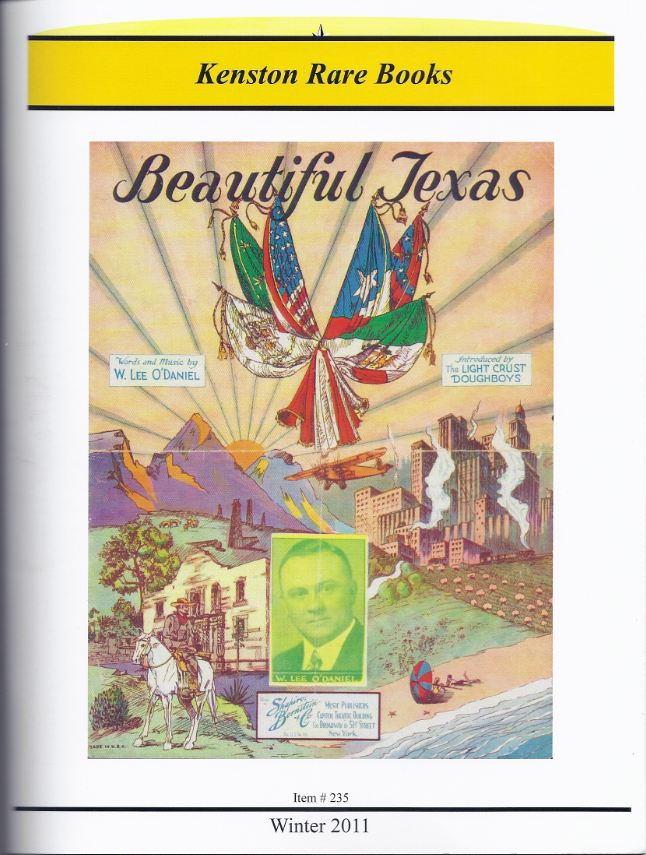 Kenston Rare Books has issued a catalogue which is not named “Beautiful Texas,” despite the appearance of the front cover. It is actually just Winter 2011. “Beautiful Texas” is one of the items within, though it comes close to being a good title. The preponderance of material relates to the Lone Star State, but there are also items for collectors of other areas within the American West. As large as Texas is, this catalogue covers even more territory. Here are some of the items offered from Texas and the West.

We will start with that item on the cover. It is a Texas song, written by one W. Lee O'Daniel, better known in Texas as “Pappy” O'Daniel, musician, radio personality, Governor, and Senator from Texas. O'Daniel was not a native Texan, but came to the state where he got a job handling radio advertising for Burrus Mills, a flour company. He hired some musicians, which he dubbed “The Light Crust Doughboys,” and began appearing on his own radio show. The Doughboys were pioneers in “western swing,” and started the careers of several Texas musicians. It launched Bob Wills, who, as Texans know, is still the king. O'Daniel became enormously popular through his radio show, where he took on the nickname “Pappy,” from an ad that included the line, “Pass the biscuits, Pappy.” It was enough to launch a political career, and in 1938, O'Daniel was elected Governor. He then went on to be elected a  senator, in an extremely close election, defeating Lyndon Johnson. It was the only election Johnson ever lost. O'Daniel ran as a populist, but he became virulently anti-labor, anti-Roosevelt though a Democrat, and started seeing Communists everywhere. He did not seek reelection in 1948, his poll numbers dwindling, and failed to make a run-off for governor twice in the 1950s, when he railed against the Supreme Court's school desegregation ruling as part of a Communist plot. “Pappy” O'Daniel is better remembered for his musical contributions than his strange, ineffective political career. Item 235 is sheet music for his song, Beautiful Texas. Priced at $115.


As long as we're looking at colorful Texas governors, here's another. James “Pa” Ferguson was elected in 1914 and reelected in 1916. Ferguson found himself in a battle with the University of Texas, and was charged with embezzlement of state funds and various other offenses. He was brought before the state legislature for impeachment. The charges are contained in item 49, Proceedings of Investigation...Charges Filed Against Gov. Jas. E. Ferguson, published in 1917. He was convicted by the legislature of the charges, and his punishment included removal from office and a prohibition against ever running again. He ran again anyway, but lost in the Democratic primary (winning the Democratic primary in Texas at the time was tantamount to election, kind of like winning the Republican primary is today). Nevertheless, Ferguson would extract his revenge, and hence the nickname “Pa.” In 1924, he ran his wife, Miriam “Ma” Ferguson, for Governor and she won. “Ma” ran on a two-for-the-price-of-one platform, promising to follow her husband's footsteps. She was noted for giving a whole lot of pardons, opposing the Ku Klux Klan, and for charges of corruption (including claims she and her husband took bribes for pardons). An attempt was made to impeach her too, but unlike “Pa,” she withstood the challenge. However, she was defeated for reelection in 1926 and in a comeback in 1930, only to secure one more term as Governor in 1932. “Ma” Ferguson was the first woman to be elected a state governor in the United States. $125.


Texas politics never lacks for entertainment value. Item 197 is a campaign card For Commissioner General Land Office – Bascom Giles of Travis County. It is apparently for the election in 1938. It calls, ironically enough, to “Restore Confidence in the Administration of the Land Office.” Giles was successful in his bid for office, and eight times in total, though he declined to take his seat the final time. Giles actively promoted a program of state loans for veteran's to buy land at favorable terms. However, he began to skim money off the program, and by the time he was to take his oath for his eighth term, Giles was under investigation by the Attorney General. He would later be convicted of fraud and bribery and spend three years working in another branch of state government, its prisons. $30.


Here is another Texas tradition, along with corrupt or otherwise ignominious politicians: Deep in the Hear of Texas: Reflections of Former Dallas Cowboys Cheerleaders. Published in 1991, it was written by three former Cowboy cheerleaders, sisters Suzette, Stephanie, and Sheri Scholz. This is an unauthorized look at cheerleader life, “the good, the bad and the ugly” of a tight-knit organization that generally wants you to know nothing of the latter two. This copy has been inscribed by all three sisters and their grandmother! Item 166. $20.