Castles and Forts from Yesterday's Muse 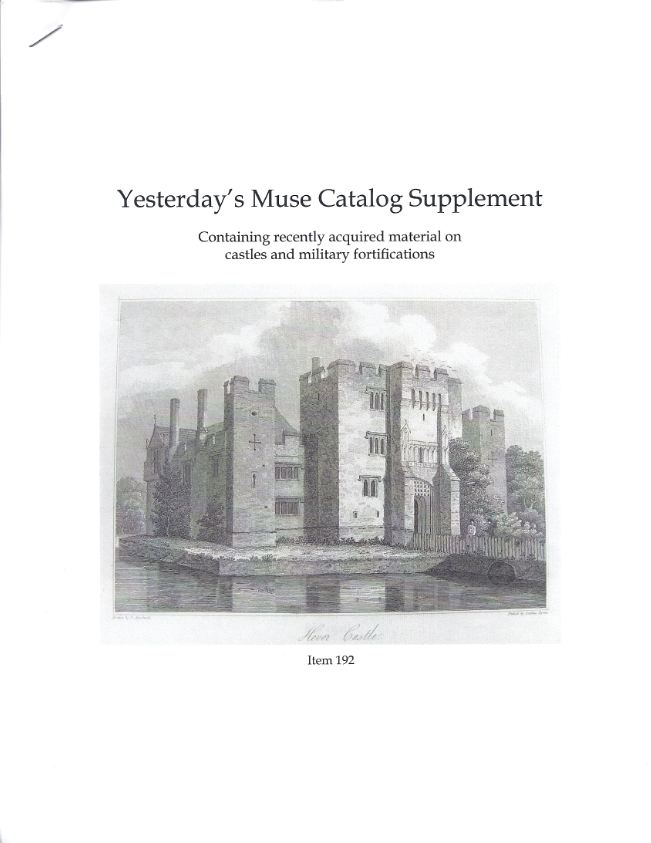 Last month we reviewed the first catalogue from Yesterday's Muse Books. This month they aren't quite ready to pass that signal moment in a bookseller's history, so rather than a second catalogue, we have Yesterday's Muse Catalog Supplement, Containing recently acquired material on castles and military fortifications. Yesterday's Muse focuses on a variety of subjects, including literature, history, and utopian fiction, all fields in which others specialize as well. However, we have not before seen a dealer who specializes in the subject of this supplement. It is filled with prints of various old, primarily English castles and forts, including some of maps and plans as well as images of the structures. Additionally, there are many books as well as prints about castles and military fortifications. For those interested in how the 1% used to live, or how armies used to fight, this supplement provides an excellent window. If you like what you see, it won't cost a king's ransom to own one of these castles or forts, most being priced in just double digits, a few in singles.

There are twelve plates, matted and ready for framing, from Histoire Generale des Voyages by Antoin Francois Prévost. Abbé Prévost bounced between two extremes, a career in the Church and as a military man. Perhaps it was a broken heart from an unsuccessful romance that led him to choose an ecclesiastical career. However, he only spent a limited amount of his time around monasteries, instead becoming a notable writer of the mid-18th century. He wrote histories, novels, and other works, as well as translating the writings of others. This particular work was an extensive account of voyages, with illustrations of various lands. From these, Yesterday's Muse has selected plates specifically illustrating castles and forts. Priced at $90 each.


There are 13 maps and prints from Les plans et profils de toutes les principales villes et lieux considerables de France. Published in 1636, this was one of the works of Nicholas Tassin, who was actually Christophe Tassin. Tassin was appointed Royal Cartographer for Dijon before moving to Paris in the early 1630s where he began issuing collections of maps, plans, and small atlases. He was particularly noted for documenting the French coastline. Tassin was a a military engineer, so his maps and plans are often focused on fortifications. Most are priced at $75 each.


Item 185 is a 1905 print of perhaps the most famous castle in the world – Windsor Castle. It is the longest, regularly inhabited castle in Europe, dating back to William the Conqueror and the Norman invasion of the 11th century. It has also served as a fortification along the Thames river, though such a use has faded as much as has the fear that England will be invaded via the Thames. Today it is home to the royal family, site of state social events, and a major tourist attraction. $45.


Here is a history of a castle with some unpleasant overtones: Royal Fortress: The Tower of London through Nine Centuries. The Tower served as a fortress, royal residence, an armory, home to the Royal Mint, and numerous other uses over the the almost ten centuries since it was built after the Norman Conquest of 1066. However, the Tower of London is best associated with its most notorious use – that of a prison, and a place of execution for those who fell out of favor for whatever reasons. A couple of Henry VIII's wives, Anne Boleyn and Catherine Howard, made their earthly exits from there so as not to inconvenience Henry by their presence, as did Lady Jane Grey, courtesy of Bloody Mary. This book was written by Peter Hammond and published by Her Majesty's Stationery Office in 1978. Item 203. $6.


Here is a pamphlet that would make a nice companion to the preceding piece. It is a look at some of the less pleasant activities in jolly old England: Torture and Punishment (Treasures of the Tower). Yesterday's Muse describes this as a “highly descriptive survey of torture and its methods through English history.” This one comes from the Department of the Environment, published in 1975. Evidently the EPA has a different role in England than in America. Item 199. $5.


Item 207 takes us to an American fort, originally built by the French: Ticonderoga: Historic Portage, by Carroll Vincent Lonergan, published in 1959. Fort Ticonderoga was built in the 1750s, during the French and Indian War. It is situated along the short section of river between Lakes Champlain and George in New York State. Its location made it a strategic point on the trade route up the Hudson River, and through these lakes to Canada and the St. Lawrence. The fort developed a reputation as impregnable after the French defeated a substantially larger British force in 1758. However, the French withdrew most of their men that winter, and they were driven from the fort the following year. Fort Ticonderoga would next be attacked, and successfully, by the Green Mountain Boys, under the command of Ethan Allen and Benedict Arnold in 1775. The Americans would hold the fort until 1777 when the British would recapture it as part of their plan to drive from Canada to New York City, thereby dividing America in half, north and south. They hoped that isolating the colonies' two halves would fatally weaken them, but the Americans would defeat the British plans at Saratoga. After that plan failed, the fort was of little strategic importance any more, and was abandoned by the British after Yorktown. Most of the fort had been destroyed along the way, but has been rebuilt and is a favorite spot now for tourists. $15.


Yesterday's Muse Books may be reached at 585-265-9295 or yesterdays.muse@gmail.com. Their website is found at www.websterbookstore.com.