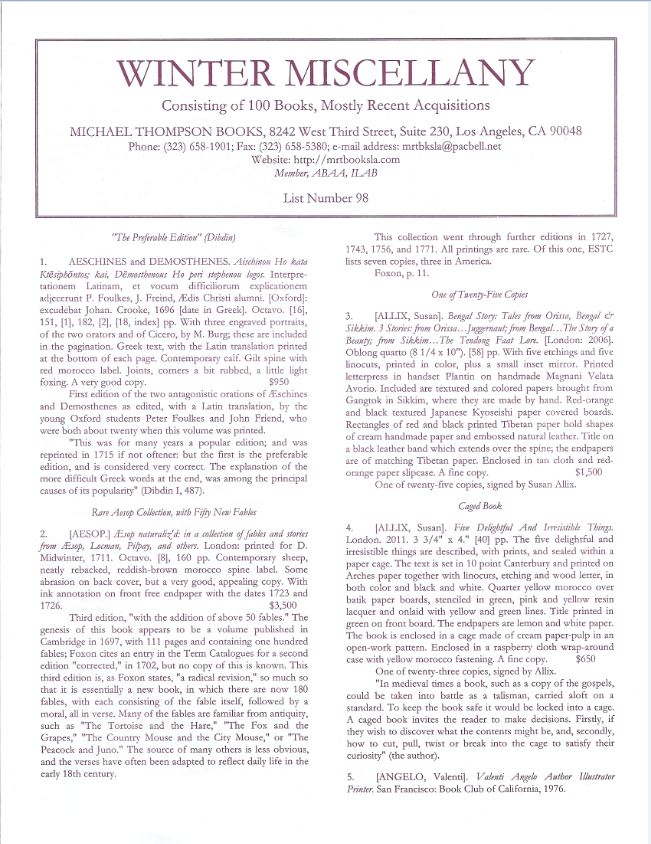 A Winter Miscellany from Michael Thompson.

Recently published is List Number 98, a Winter Miscellany Consisting of 100 Books, Mostly Recent Acquisitions, from Michael Thompson Books. Thompson never seems to give us exactly 100. Usually there are a few more, this time a few less. Precision isn't necessary. This is an interesting and varied collection of works, ranging from 16th century printings of Greek classics to practically new works from fine presses. Variety is the word. Now, here are a few more words to describe some samples of these 96 items.

Here is one of those very ancient texts. Item 7 is In Aristotelis Libros Octo Politicorum Commentarii... It is a commentary on Aristotle's Politics by 15th century Italian scholar Donato Acciaiuoli (when is the last time you saw a name string five straight vowels together?). Acciaiuoli was a diplomat, humanist, scholar, and member of a powerful Florentine family. He wrote translations of, and comments on, classic works. He died in 1478 on route to Paris, seeking the King's help in Florence's dispute with Pope Sixtus IV. Though this work was not published until 1566, it is the first edition. Priced at $2,500.


Item 26 is a work for women's equality from a most colorful feminist, and other things, Tennessee Celeste Claflin, also known as Tennie C. Claflin. She used the sly “Tennie C.” as the author of Constitutional Equality a Right of Woman... Claflin's father had been a gentleman who made money however he could, not always fully above board, and Tennie learned well from him. She would give spiritual readings, and was rumored to provide other services to her male customers. One of those customers was the aged, very wealthy Cornelius Vanderbilt, who took a liking to her, and provided some financial assistance along the way. She and her sister, Victoria Woodhull, opened a Wall Street brokerage house, the first women to do so, and began publishing a feminist, and somewhat libertine journal, Woodhull and Claflin's Weekly. Her sister would be the first woman to run for president, unsuccessfully (to put it mildly) opposing Ulysses Grant. Claflin may have hoped Vanderbilt would marry her after his first wife died, but he chose another. She later moved on to England where she did snare another old man, and became Lady Cook, Viscountess of Montserrat. There was probably not much love between them, but it provided Tennie with entry to British society and a decent (though not Vanderbiltian) amount of money, and provided Lord Cook with... whatever. She died in 1923. $750.


Here is the name of perhaps the most famous American feminist... well, almost. Item 6 is The Life and Character of Miss Susanna Anthony... Note that is “Susanna,” not Susan Anthony. Susanna was a tormented young lady when she found spiritual fulfillment in the Congregational Church at the age of 15 (her parents were Quakers). Perhaps she was something of a feminist in that she helped establish a group to bring women around to her values, but this would certainly not be the feminism of Susan Anthony. Susanna would live a pious life, and keep a lengthy diary. That diary and her letters would be the basis for this book, compiled by Rev. Samuel Hopkins in 1796, five years after her death. Hopkins described her as “a remarkable example of devotion, benevolence, and christian friendship; of self-denial, sobriety, humility, industry, and of careful circumspection and conscientiousness in all her concerns and conduct.” Susanna Anthony was the more pious, but Tennie C. was more fun. $600.


Item 41 is The Life, Letters and Labours of Francis Galton, by Karl Pearson. It consists of three volumes (in four) published 1914-1930. Sir Francis Galton is not particularly a household name today, but he was a brilliant and creative man, a true polymath. He made major contributions in the fields of meteorology, eugenics (he invented the term), statistics, geography, anthropology among others. He developed a means of identification through fingerprints. Galton was a grandson of Erasmus Darwin, and cousin to Erasmus' more famous, though not necessarily more accomplished grandson, Charles Darwin. $2,500.


Here is another man who is associated with Charles Darwin, but not in a familial way. Item 87 is A Narrative of Travels on the Amazon and Rio Negro... by Alfred Russell Wallace, published in 1853. Wallace was a naturalist who traveled to South America in 1848. He had already read Robert Chambers' Vestiges of the Natural History of Creation, something of a precursor to the theory of evolution. Chambers believed species evolved without divine intervention, but thought this was following some sort of natural law, rather than natural selection. Wallace's time in South America would have a profound influence on him, as it had Darwin, and completely independent of his better known contemporary, he came to a virtually identical theory of evolution. Darwin likely reached his conclusions earlier, but because of the obvious controversy it would create, kept quiet. However, in 1858, Wallace, now convinced of evolutionary theory, sent a paper on the topic to Darwin. The latter realized he must release his own conclusions or forever be forgotten. A compromise was reached, and Darwin and Russell jointly published the first paper to describe the theory of evolution by natural selection. $3,500.


Item 16 is an account of geologic processes and the formation of the Earth from a time long before Darwin and Russell forced us to reevaluate our earlier assumptions. The title is Archaeologiae Philosophicae: sive Doctrina antiqua de Rerum Originibus; the author Thomas Burnet. It was published in 1692. Burnet arose in a period when scholars still generally took biblical stories as being literal, historic truth, but tried to give scientific explanations to the more baffling events. Burnet looked at the biblical account of the Flood, but concluded there was not enough water on the Earth to explain such an occurrence. He reasoned that the extra water must have arisen from subterranean caverns. Burnet believed that the Earth had once been smooth and perfect, basked in eternal springtime, but when the waters rose out of their subsurface caverns, the caverns began to collapse, causing mountains and other scars to the Earth's surface. Burnet was heavily criticized by some biblical literalists for his theories. They believed the subterranean water contradicted the biblical idea of a Hell in the Earth's center, a place, quite literally, hot as Hell. In this book, Burnet expanded his controversial beliefs to suggest allegorical rather than literal interpretations of such things as the six days of Genesis. It cost him his government job, though at least not his freedom or life. $1,500.