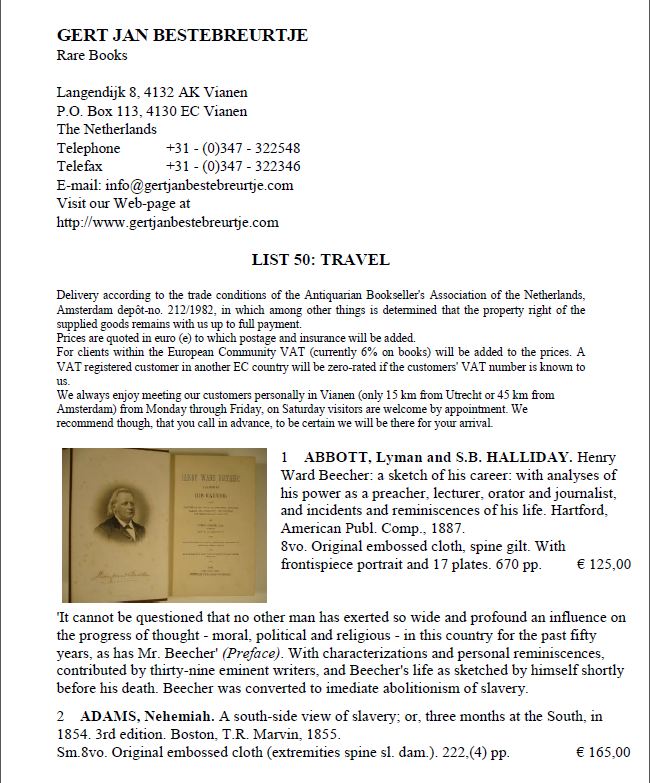 Gert Jan Bestebreurtje Rare Books has issued List 50: Travel. This is a collection of mainly 18th and 19th century travels, or material related to journeys. We will describe some of it as “related,” as there are many items pertaining to slavery, or the Dutch East India Company, not specifically about the journeys themselves, but it took long journeys in slave ships for slavery to exist, and even longer trips for residents of the Netherlands to make it to the East India Company's colonies in far off Indian and Pacific Ocean lands. Here are some of the travel items now being offered.

Item 31 is the first really thorough look at the United States after the Revolution. Voyage dans l'Amerique Septentrionale, dans les Annees 1780, 1781 et 1782 was the work of the Marquis de Chastellux. Chastellux served as a major-general under Rochambeau, assisting the Americans during their Revolution. After the war, he toured around America, from Virginia to Pennsylvania and New England. According to the commentators, nothing escaped his eye. Chastellux wrote about practically every detail he saw, “even the most trifling incidents that bad roads, inconvenient inns and distracted times usually afford” (from an early Maggs catalogue). The book also provides information about more important issues, such as the economy, social conditions, and the character of the people. He also provides commentary on events during the Revolution, and later, on a visit to Monticello to meet with Jefferson. Offered is the first complete edition (there had been a shorter, privately printed edition prior) published in 1786. Priced at €795 (euros, or around $1,068).


Item 174 is the French language account of an Englishman's visit to a part of Russia that became part of America during his travels. Sounds appropriate for a Dutch bookseller's catalogue! Frederick Whymper was an odd combination of artist and explorer. In 1865, he traveled with the Western Union Telegraph Expedition to Russian Alaska. As to why Western Union was exploring Alaska, that's a strange story. An attempt had earlier been made to lay a cable from America to Europe under the Atlantic Ocean, but that cable quickly failed. So, Western Union got the bright idea of running a cable from San Francisco, up through Oregon and Washington, British Columbia, Russian Alaska, under the Bering Sea, across Siberia, and on to Moscow, where it could hook up with existing cables running east to Europe. It was hoped that this long route, because it had much less of a distance under water, would hold up better than the Atlantic route. However, after much surveying and some initial construction, it was abandoned after a successfully working cable was run under the Atlantic. While the Overland Telegraph was a dismal economic failure, it did provide much information about Alaska, and may have played a role in America's decision to purchase the land from Alaska in 1867. Whymper writes about his travels in Alaska, where he was still present to witness the raising of the American flag over the land. The French edition of his “Travels and Adventures in Alaska,” titled Voyages et Aventures dans l'Alaska, was published in 1871. €225 (US $302).


Item 49 is a book about a most interesting American character - Walter Murray Gibson. He was likely born in the South, though he at times claimed he was born in England. Described in a 2006 article in the Honolulu Advertiser (a newspaper he once owned) as both “a silver tongued 19th-century adventurer,” and a “scoundrel of historic note,” he makes his first appearance on the public stage as a captain of a ship running guns in the Caribbean. He next set off for the Dutch East Indies, landing on Sumatra. He made his way inland, and being the “silver tongued” scoundrel he was, became friendly with various princes and nobility of the island. The Dutch were not amused. They saw him as a disruptive force and promptly threw him in prison. He was there for 15 months before managing his escape. Back in the U.S., he published this book in 1855, The Prison of Weltevreden; and a Glance at the East Indian Archipelego. It recounts the various unpleasantries he experienced at the hands of the Dutch. Gibson would go on to have an even more interesting career in the years after this book. He went to Utah, converted to Mormonism, and headed off to Hawaii as a missionary. However, within a few years, he was excommunicated by the Mormons. Seems he was using church funds to amass personal power, among other things. It did not slow down Gibson, who used his remarkable personal skills to get in the good graces of various important people, securing funding to buy the Advertiser, and then inserting himself as a voice for natives of Hawaii versus recent arrivals. In particular, he garnered the support of the King, who named him Prime Minister, and to other important offices. However, he schemed to grow Hawaii into an empire of Pacific Islands, and when this plan fell apart, he fled Hawaii for his life. A year later, in 1888, he died in San Francisco. €275 (US $370).