Winnie-The-Pooh, Milne, and Shepard Too, from Peter Harrington 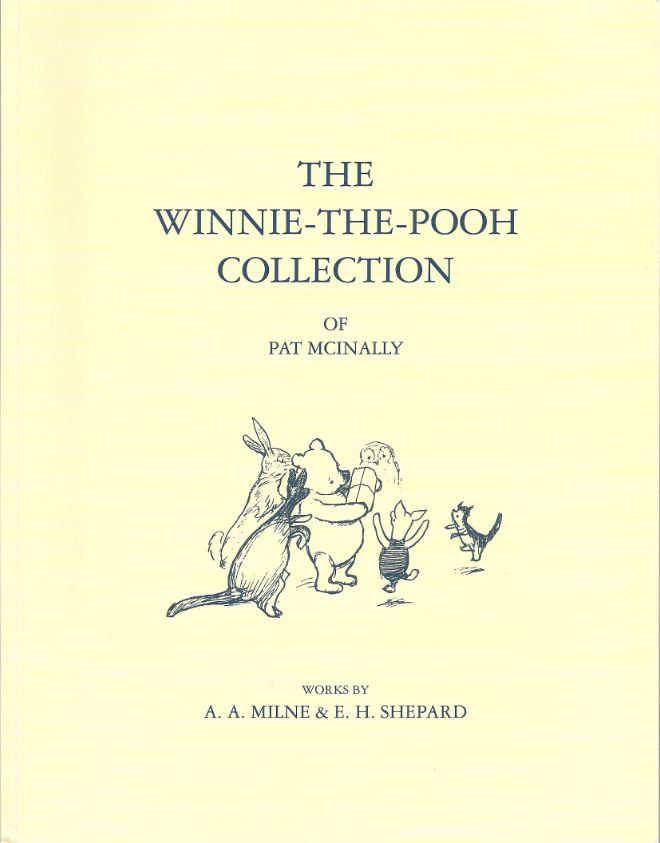 The Pat McInally collection of Winnie-the-Pooh.

Peter Harrington has issued their Catalogue 80, and it is a very special collection for those who are very young, at least at heart. It is The Winnie-The-Pooh Collection of Pat McInally. Works by A.A. Milne & E.H. Shepard. It is probably safe to say that everyone here knows Pooh Bear and Milne and Shepard, but many of you may not be familiar with McInally. Pat McInally was a (American) football player, spending ten seasons in the National Football League with the Cincinnati Bengals. Perhaps if he had played with the Dallas Cowboys you would know him better. McInally was primarily a punter during those years, but also was a receiver at times. Stereotypes to the contrary, McInally was a football player of very great brain, a Harvard graduate and the only player to ever obtain a perfect score on the Wonderlic test, given professional football players to determine their ability to learn complex plays. In his post-football days, McInally became a book collector, and what is offered today is the spectacular collection related to Winnie-the-Pooh, his author and illustrator, McInally put together.

The four Pooh books were not the first from A.A. Milne. He was already an established and successful writer, two decades in the making. He wrote material for Punch magazine (where he met Shepard), short stories, essays, mysteries, and more. Still, it is the children's tales, Pooh in particular, for which we remember him. His first stab at writing for children appeared in the November 1923 issue of The Merry-Go-Round. The poem he included was The Doormouse and the Doctor, and it would reappear a year later in When We Were Very Young. Item 3. £300 (British pounds, or about $464 in U.S. dollars).


Item 9 is a signed copy of the first U.S. edition of the first of the Pooh books, When We Were Very Young. It was part of a limited run of 500 copies, 100 of which were signed. However, this is a very special signed edition. It is double signed. Along with that of Milne is a child-like scrawl of “Billy Moon.” Who is “Billy Moon?” Just the hero of the books, or perhaps second hero next to that of Pooh himself. “Billy Moon” was the nickname of Christopher Robin, that is, the real Christopher Robin – Christopher Robin Milne. This Christopher Robin, on whom the stories were based (along with Christopher's collection of stuffed animals), was only four years old at the time. To his parents, Christopher was known as “Billy,” and because he had a bit of difficulty saying his last name, Milne, it came out as “Moon.” Young Christopher/Billy Milne/Moon thought he should help out with the book signing, so the first 8 of the 100 signed copies also have the bonus of having the “Billy Moon” signature. £9,500 (US $14,700).


Item 22 is a 1926 letter from A.A. Milne to his illustrator, Ernest Shepard. Harrington notes that while they were not close personal friends, they were quite friendly to each other and each admired the other's work. Milne was in the process of writing Winnie-the-Pooh at the time, and the procedure the collaborators used was Milne would send Shepard a couple of chapters he had finished, and based on those, Shepard would create his drawings. Writes Milne, “Dear Shepard, I enclose the latest Pooh. I saw the drawings of the first two at Methuens yesterday, and I loved them.” The letter goes on to discuss a project where Milne would prepare a book of Mother Goose rhymes and Shepard would illustrate them. Milne had earlier offered Shepard a 20% royalty stake in Winnie-the-Pooh, an unusually high amount, and proposed an even more generous 50/50 split on Mother Goose. However, this project never came to pass. £7,500 (US $11,611).


Later that year, Winnie-the-Pooh was released, and item 34 is a copy of the first U.S. trade edition. Milne has inscribed it to Shepard, and it reflects well the high esteem Milne had for his partner. Writes Milne:

And put (if there is room)

Two pictures on the stone:

Piglet from page a hundred and eleven,

And Peter, thinking that they are my own,

will welcome me to Heaven.


McInally's collection included several of Shepard's original drawings, including some iconic images you will likely instantly recognize. Item 23 is a preliminary sketch of the map of the Hundred Acre Wood, which eventually would find itself on the endpapers of Winnie-the-Pooh. A few handwritten changes can be seen, such as changing Eeyore's “Pasture Land” to his “Gloomy Place.” £115,000 (US $178,216).