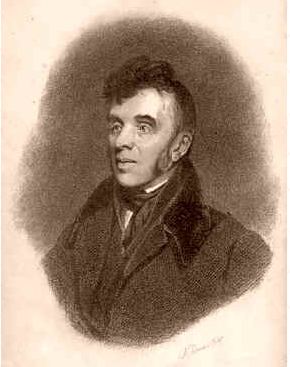 Ebenezer Elliott was a sensitive, somewhat sickly and lonely young man growing up in Yorkshire. He was not a good student, but on his own developed an interest in botany. His love of flowers in turn led him to write poetry, though he was untutored in the art. However, when he grew up, he needed to make a living, and after his marriage, he invested his wife's considerable sum of money in his father's iron foundry. It didn't work out. The firm went bankrupt and he lost everything. That experience stayed with him the rest of his life. He blamed it on the Corn Laws. The Corn Laws were heavy tariffs imposed on the importation of grain. The purpose was to protect the pricing of English farmers. However, they also resulted in higher prices for bread, a heavy burden for the poor. Many manufacturers believed the grain tariffs were harmful to their businesses, a position firmly held by Elliott. Somehow, he managed to convince his wife's sisters to invest in him again, and this time, his iron foundry was a great success. Still, his feelings about the Corn Laws never abated, and his indignation turned from his own losses to the laws' effect on poor people. Elliott turned his pen to the Corn Laws, becoming the poet laureate of repeal. Item 164 is The Life, Character, and Genius, of Ebenezer Elliott, the Corn Law Rhymer, by January Searle (pseudonym for George Searle Phillips). It's a brief biography of this poet for the poor. It was published in 1850, the year after the Corn Law Rhymer died. Fortunately, Elliott did live long enough to see the Corn Laws repealed in 1846. $85.

“Captain” Samuel Alfred Warner sounds like one of those screwballs, but charlatan would have been a better description of the man. Warner claimed to have invented an incredible military weapon, which he described in this 1849 work, Fair Play's a Jewel: A Narrative of Circumstances Connected with my Mode of National Defence Against the Whole World. In 1841, he actually got a £1,300 advance from the government to display his miraculous “invisible shell,” which he hoped to sell for £200,000. This “invisible shell,” he claimed, could blow up enemy ships from a great distance sight unseen. In front of several Members of Parliament, Warner, on command, blew up a ship in the harbor, with no visible shell striking the target. The MPs were unconvinced. Three years later, Warner pulled off the same stunt in front of the entire population of Brighton. Apparently, Warner had placed explosives under ship, which were set off when an underwater rope from the boat which had towed it out was yanked. “Captain” Warner died in 1853, and all his scheming was evidently to no avail, as his family was left penniless and forced to rely on assistance when he died. Item 213. $225.