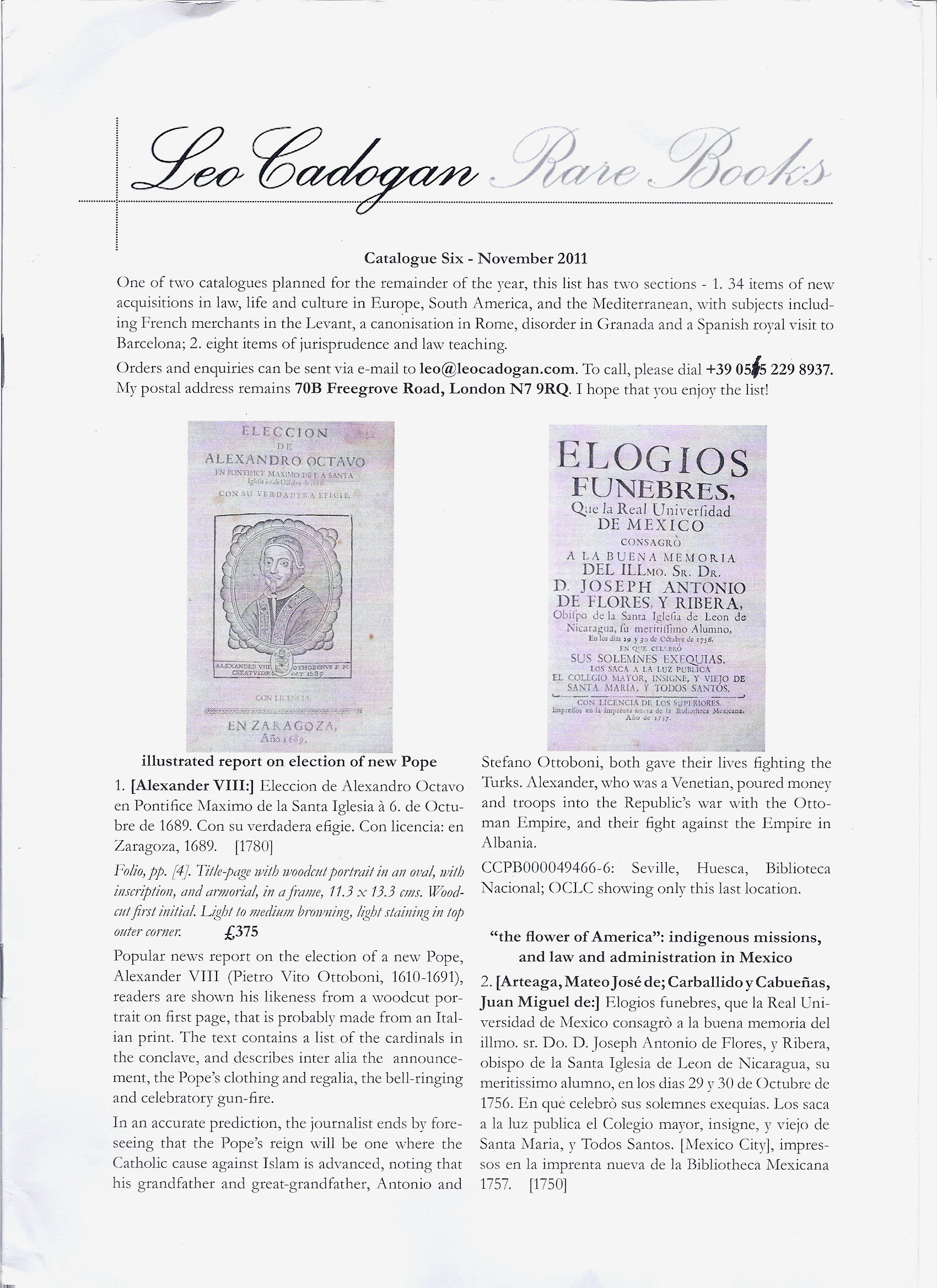 Leo Cadogan Rare Books recently released their Catalogue Six – November 2011. The catalogue includes “34 items of new acquisitions in law, life and culture in Europe, South America, and the Mediterranean,” along with “eight items of jurisprudence and law teaching.” To that description we can add one more word - “antiquarian.” These are old books, primarily from 17th and 18th century. Topics vary, but they concern the issues of the day, mostly those of church and state. Here is a sample of these 42 new acquisitions.

Western nations today deal with the issue of jobs lost to cheaper Chinese imports. They appear handcuffed in dealing with the problem. French King Louis XV evidently had no such trouble. Item 14 is an Edit du Roy, qui prononce des peines contra ceux qui intoduiront... published in 1726. It deals with the introduction into the country of goods from China, the Indies, and the Levant. Twenty-two rules are promulgated. For example, those who import three or more dyed or painted items of canvas, bark, or cloth will be sentenced to death. One has to think this would get would-be importers' attention. Priced at £260 (British pounds, or around $402 U.S. Dollars).

For a King so hard on illegal importers, it is surprising that he would leave a will with very liberal sentiments. It is, indeed, literally unbelievable. Item 31 is the Testament de Louis XV. It was published in Brussels in 1787, thirteen years after the King died. In his will, Louis XV called for political reforms, religious freedom for Protestants with redistribution of some Church property, reforms of the justice and tax systems, and taxation of the East India Company. This book must have provided a most hopeful sign to a nation under the thumb of the King's successor, Louis XVI. Alas, Louis XV left no such advice. His “will,” not that surprisingly, was a fake. £575 (US $888).

Item 36 is Tractatus absolutissimi...commentando in tit. ff. Soluto matrimon. These are legal commentaries on the laws of Justinian by Pedro Barbosa, a Jesuit who advised the Portuguese government. This book would be an appropriate gift for Ms. Kardashian as it pertains to the return of dowries after the dissolution of a marriage. This is the 1609 edition of a work first published in 1595. £950 (US $1,473).

The city fathers of Bordeaux, France, must not have had much of importance to do, as they found time to publish this list of 24 rules for attending the theater: Ordonnance de messieurs les maires et officiers municipaux de la ville de Bordeaux, concernant la police du spectacle. Published in 1790, one can imagine the French Revolution being started by citizens tired of nitpicking regulations. It limits how many people can sit in the hall, bans “persons of gender” from wearing their hair so high as to obstruct the view (I like that one), bans saving seats, shouting, whistling, throwing notes on stage (and forbids actors from reading them), loitering in the corridors, and, if you are a wig maker, from showing up at the performance covered in powder. Item 5. £180 (US $278).

The officials of Bordeaux were also displeased with what was going on in Martinique, the French Caribbean island. There had been a slave revolt in the town of Saint-Pierre, and though these were times of revolution for liberty and equality in France (1791), evidently the municipal government of Bordeaux was not happy about Martinique slaves wishing to obtain such rights. They sent a ship to the island to help reestablish order, only to have that ship seized by revolutionaries, including people they had hired to defend it. Alors! The city government then calls on the French nation to send ships and soldiers to Martinique to put down the rebellion. Item 4 is a Lettre de la municipalite de Bordeaux au Ministre de la Marine, concernant les secours a envoyer a la Martinique. £280 (US $434).

Evidently the French were fond of rules, as here are some Ordonnance du Roy... (rules of the king). These come from the aforementioned Louis XV, though he probably did not write them himself. The young king was just six years old at the time (1716). These rules pertained to French merchant families operating in the Ottoman empire. Some of their young men were engaging in “hardly presentable marriages.” Unpresentable marriages were evidently those between French merchants and either native women or French women of an inappropriate caste. Penalties included loss of certain privileges to those who married inappropriately, and their unpresentable descendants as well. Also, French merchants who married before the age of 30 without parental consent lost their right to hold public office. That seems an awfully long time to have wait for approval from Mom and Dad. Item 16. £195 (US $301).