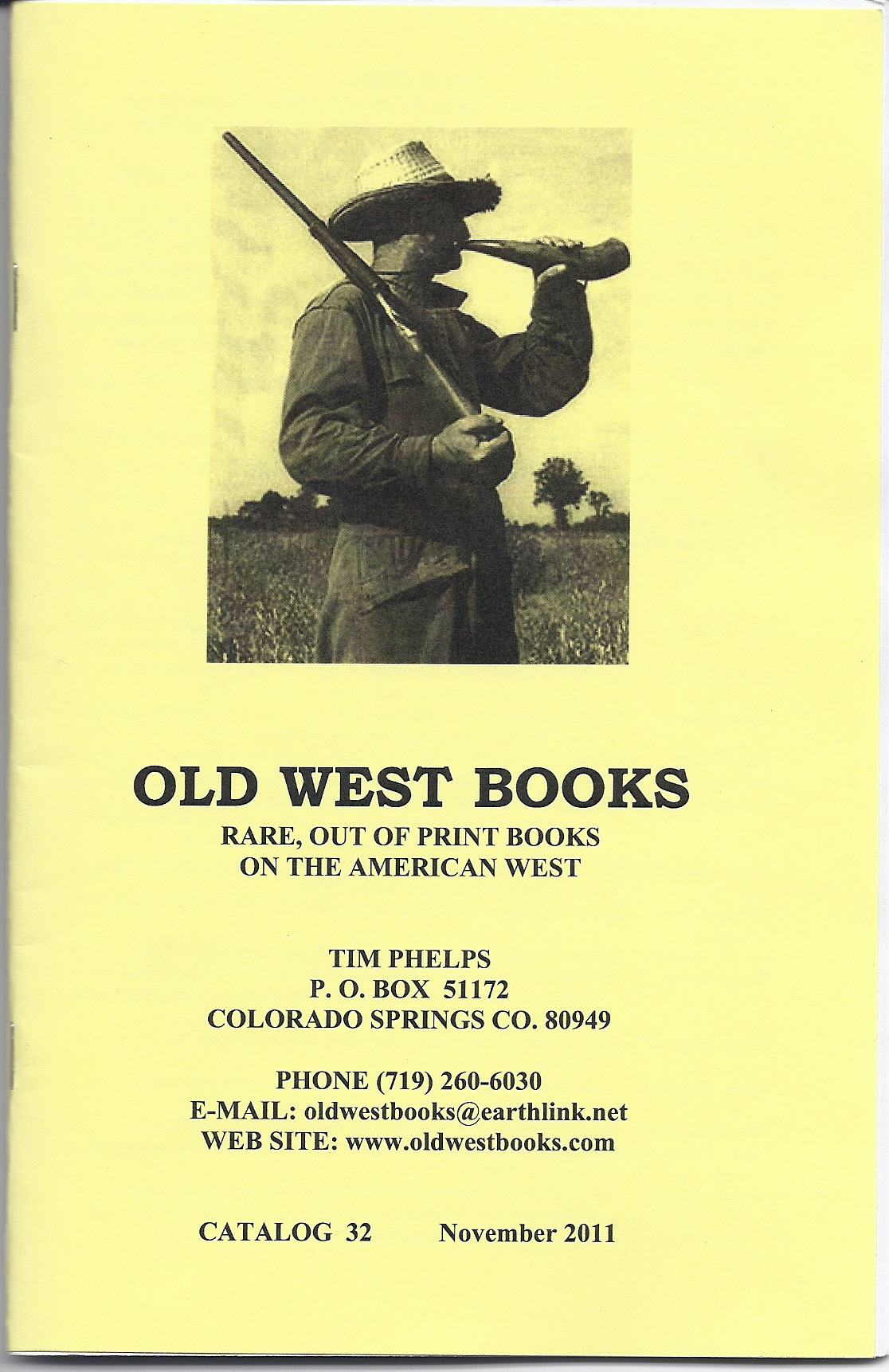 Old West Books has issued Catalog 32 of Rare, Out of Print Books on the American West. Old West lists its specialties as, “the American West, Custer, the Fur Trade, Overland Travel, the Cattle Industry, and the Civil War.” Those are all western subjects except the latter, but Civil War material generally relates to the less well known skirmishes that took place on the frontier while the major battles were being fought in the South. This is a catalogue that will appeal to anyone interested in the “Old West,” that being the western part of America in the 19th and early 20th centuries. Here are a few items from this latest selection.

Item 138 is the “official” biography of one of the earliest familiar names of the Old West – Kit Carson. Carson headed west in the 1820s, long before any semblance of settlement of the region had begun. He was one of the mountain men and fur trappers who were the only non-natives to inhabit the land. He became familiar with several of the Indian tribes, marrying a couple of native women along the way. As the fur trade died out, Carson became a scout, leading John Fremont in his expeditions through the West. It was this role that made Carson something of a household name. He would next become an Indian agent, and around this time was when his biography was written. Carson did not write it, he dictated it. He could neither read nor write. It was DeWitt Peters who put Carson's words to text in 1858 in The Life And Adventures Of Kit Carson, The Nestor Of The Rocky Mountains, From Facts Narrated By Himself. Carson reportedly said of Peters' biography that he “laid it on a leetle too thick.” The again, what westerner didn't? Hello, Buffalo Bill. Carson's last years are more controversial, as he led a brutal campaign against the Navajos in the 1860s, but that came after this biography was written. Priced at $750.


Kit Carson may have needed the help of a publicist to build his legend, but here is a man who needed no help at all. No one was ever a better self-promoter than Buffalo Bill. William Cody was a very talented scout and buffalo hunter for a few years, but he followed that up with decades of reliving his legend and that of the West for audiences back east. In fact, his legend, and Wild West Show, extended way beyond America's borders. Bill took his show to Europe, and they loved him there as much as in America. Item 85 is a 1908 account of those performances by Charles Griffin, Four Years in Europe with Buffalo Bill. It includes a description and photographs from Bill's successful tour. $275.


As long as we are on a run of legendary western figures, here is another name we all know – Wild Bill Hickok. Wild Bill came out west in the 1850s, looking for work. Along with work, he found trouble. Wild Bill's strong suit was his accuracy with a gun, and a couple of shootouts later, he was a legend. Like many others, his exploits were greatly exaggerated, the five people he actually shot swelling to 100. While Bill skirted the law on occasion, and was tried for some of his killings, he spent more time as a lawman, and one no one wanted to cross. He also had an insatiable attraction to the card tables, and eventually, gambling would be Bill's downfall. He was seated at a poker table in Deadwood, back to the door, when a drifter of unknown motives, pulled out a gun and shot Wild Bill in the head, killing him instantly. Item 22 is the Life and Marvelous Adventures of Wild Bill the Scout, by J.W. Buel, what is believed to be the “true first printing” of the first and perhaps best book about the man. It was published in 1880, four years after Wild Bill died. $2,500.


Theodore Roosevelt was a noted outdoorsman and conservationist, along with being one of America's greatest presidents. He took numerous trips to the American West, which Hermann Hagedorn memorialized in his 1921 book, Roosevelt in the Bad Lands. The copy is inscribed by the author to “T.R. and Mrs T.R.” Wait a minute. This is a 1921 book. T.R. Died in 1919. Surely his biographer would have known. The bookplate reveals the answer. It is that of Theodore Roosevelt, Jr. The second T.R. (we are now up to five) never had much of a political career, but he served valiantly in the Second World War, particularly on D-Day, when he was the only General to land with the first wave of troops (at his insistence). He somehow survived, only to die a month later from a heart attack. Item 88. $1,250.