47 from The Pages of Yesteryear 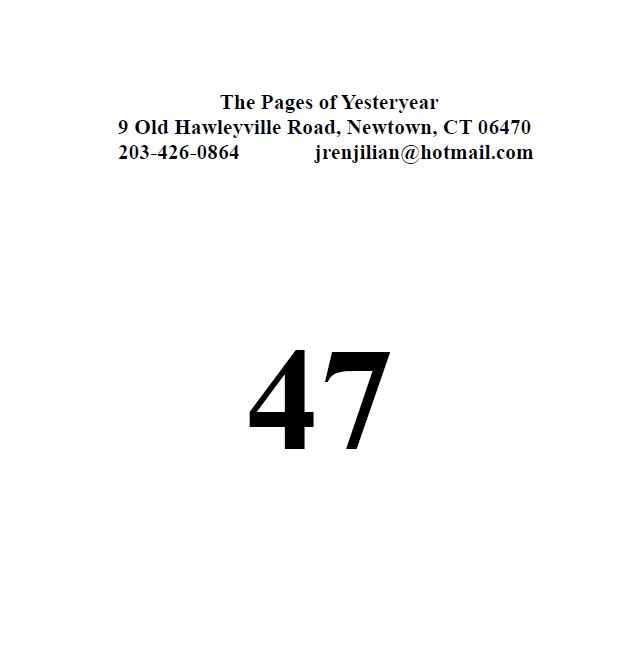 The Pages of Yesteryear has just released a catalogue succinctly titled 47. With almost every catalogue we see named for a number, that represents its sequential place in the bookseller's presentations. Not true here. This 47 stands for two things – the number of years The Pages of Yesteryear has been in business, and the number of items offered in the catalogue. Let's see... 47 years ago. That would be 1964. Lyndon Johnson vs. Barry Goldwater. It was not obvious at the time, but the roles of both political parties would be massively altered by those two choices. American music would be equally redirected that year by the Beatles and the British Invasion. Herbert Hoover died that year, the man unfortunately synonymous with the period we reference when we say the current recession is the worst economic downturn since... Passage of the Gulf of Tonkin Resolution started the major escalation of what would become known as the Vietnam War. However, not everything has changed. In 1964, after an almost miraculous September comeback, the St. Louis Cardinals went on to win the World Series. Forty-seven years is a long time for anything. For selling books it is exceptional. Here are a few of the symbolic 47.

Item 9 is one of the earlier documents from one of the darkest episodes in American history. Published in 1829, it is the Memorial of John Ross and Others, Representative of the Cherokee Nation of Indians. The Cherokees were under great pressure by the state of Georgia at that point. Georgia wanted them removed from their homeland so that settlers could take their land. Since the Cherokees were unwilling to move, the state started applying its laws on their sovereign territory, the intention being to make life so unpleasant the Cherokees would agree to leave. John Ross had recently succeeded to the position of primary Chief of the tribe, a position he would hold for nearly 40 years. Ross was actually 7/8ths Scotch and only 1/8th Cherokee, but had been brought up in both cultures. He was a businessman, fluent in English, and understood American law. The tribe recognized that they needed someone with his level of understanding of American culture to make their appeals to the U.S. government. Ross argued well for his tribe's sovereign rights and against removal, but ultimately to no avail. Despite support from some political leaders, including Daniel Webster and Davy Crockett, and decisions of the Supreme Court, President Jackson was determined to support the Georgia settlers at the Cherokees' expense. During the next decade, those Cherokees who refused to give up their land voluntarily were forced to move to Indian Territory, today's Oklahoma, many, Ross' wife included, dying along the way. Priced at $100.


For those who collect propaganda, here is a collection of wartime leaflets of the sort that was intended to break the morale of the enemy's soldiers. I doubt they really worked very well, but that never stopped the parties from trying. Item 29 is two volumes of leaflets, translations of them, and related items used by the U.S. during the Korean War. The leaflets were dropped on Korean and Chinese soldiers, the evident intent to either get them to desert, or at least become so depressed they couldn't fight anymore. For example, one leaflet, targeted to Chinese soldiers, tells them, “The Chinese soldier is a lost hero. He is doomed by Communist leaders to perpetual slavery of World Revolution. He will never know the pleasures of a wife and sons. His name - lost because it was never given to a son - will die with him on the foreign battlefield of Korea.” The Chinese fought on anyway, and for their determined efforts, they have been rewarded all of these years with having North Korea for a neighbor. $450.


Item 46 consists of four World War II era photo albums, belonging to one Natalie Robinson. Ms. Robinson joined the WACs (Women's Army Corps) and served in London and later France, being in Paris for its liberation. Some of the photographs are of the parade and celebrations of this momentous event. According to a Boston Herald article in 1944, Ms. Robinson was “one of the prettiest and one of the most serious WACs in this outfit.” She served as a secretary in the purchasing department (which was about as close to combat as a woman could get in those days). Later photographs, dating from 1948, are taken around Cape Cod and Columbia University. While I cannot be certain, dates and places, such as Boston, London, Paris, and Columbia University, lead me to think she may be the Natalie Robinson who married economics professor Gerald Sirkin in 1951, co-wrote several articles with him, and later in life became somewhat involved in politics in Sherman, Connecticut, and wrote columns for a local newspaper, generally from an extremely conservative point of view, until her death earlier this year at the age of 90. $800.


Here is an unusual cure for intemperance: Vegetarianism The Radical Cure For Intemperance. Actually, that is somewhat counterintuitive, since alcohol is produced from grains or other plant materials. Nonetheless, author Harriet P. Fowler reports that, according to a Dr. Holbrook, he observed that “in a large acquaintance with vegetarians, we have never known one to be a lover of alcoholic drink or tobacco, and they suffer less from disease than flesh-eaters.” Probably most vegetarians would make the same claim today. Ms. Fowler argues for a “lax” rather than stricter (vegan) vegetarian diet and provides lists of suitable alternatives to meat. However, her focus is more on the evils of alcohol than of meat. Item 11, published in 1886. $125.


The 19th century was filled with appeals against the consumption of alcohol. Here is another, a broadside, the heading for which says it all: “A Dialogue Between ‘The Devil’ And ‘The Rumseller,’ in which the former, by a “suasion” peculiar to himself, frightens his ally out of his nefarious traffic, and thereby loses a most laborious subject of his dominions.” This circa 1835 tale by William Withington tells of the rumseller who quickly learns the evil of his ways and joins the temperance movement. Item 44. $450.