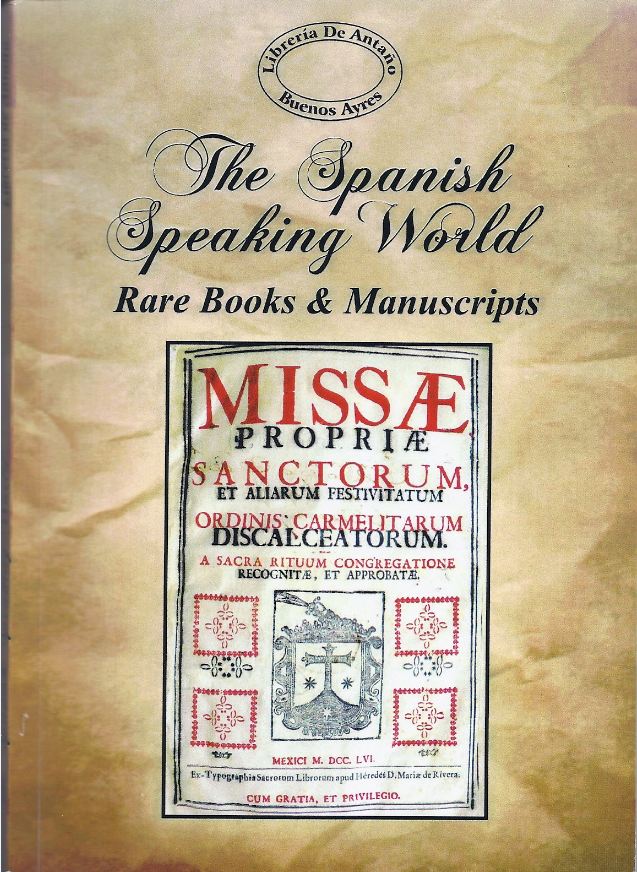 Libreria de Antano recently issued a catalogue entitled The Spanish Speaking World. Rare Books and Manuscripts. That world, quite naturally, begins with Spain, but then extends to South and Central America, a bit of North America, the Caribbean, and the Philippines. The catalogue occasionally slides outside these boundaries to the Portuguese world, but Spain's Iberian neighbor deserves a good turn. Most of the material relates to Latin America, the once extensive colonial empire of Spain that quickly disintegrated around 1820, but still retains cultural and linguistic ties to the land that once conquered it. Over 500 years have passed and Columbus still throws a long shadow over the land. This catalogue is presented in chronological order, ranging from the 1548 first Spanish edition of Apianus' atlas to a 1967 first edition of a novel by Gabriel Garcia Marquez. Here are a few of the items in between.

Here is a work we don't generally think of as one of Spanish America, and yet it most certainly is, even if it was written by a couple of English explorers. Item 98b is a first edition, first issue of the Narrative of the Surveying Voyages of His Majesty's Ships Adventure and Beagle, 1826-1836, describing their examination of the Southern Shores of South America... This set contains the three volumes and appendix. There were two voyages, but it was the second one, and specifically the work taking place on the Beagle, that would make this one of the most important scientific voyages ever. The primary author, and captain of the ship, Robert Fitzroy hired on a young naturalist named Charles Darwin to study the natural history of the area. It was during this expedition that Darwin would examine fossils from extinct species, and note similarities and differences between species on the mainland and on various islands. From this Darwin would conclude that species were somehow changing into others, and in time he would reach the conclusion that one species evolved to another through natural selection, though it would take two more decades for him to announce this theory. The third volume of this set, published in 1839, was written by Darwin, and it reveals much of the evidence on which his theory of evolution would in time be formed. Priced at $38,500.


Item 2 is described by Libreria de Antano as “the major work of narrative prose of Spanish literature.” It is a rare first edition of El Conde Lucanor, the 1575 first edition of a work that was written in the 1330s. The author was Don Juan Manuel, and his tales of Count Lucanor consists of numerous short morality play stories. The Count presents various difficult situations before his wise advisor Patronio, who rather than giving an answer, provides a story based on a similar situation. By the time it is finished, the Count is able to see the parallel and knows what needs to be done. The best known section of this work is the first part, with 51 such stories, drawn from various sources, including Aesop, and old Arabic and Hindu tales. This copy is apparently unique as it has a different title page and final leaf from other known copies, though everything else is identical to other first editions, and these pages were printed at the same time as the others. Libreria de Antano speculates that this may have been a preliminary copy, one that was missing these two pages so that replacements were quickly ordered, or someone was pirating the work to avoid taxes. Price on request.