“Destroyed by Fire” from the William Reese Company 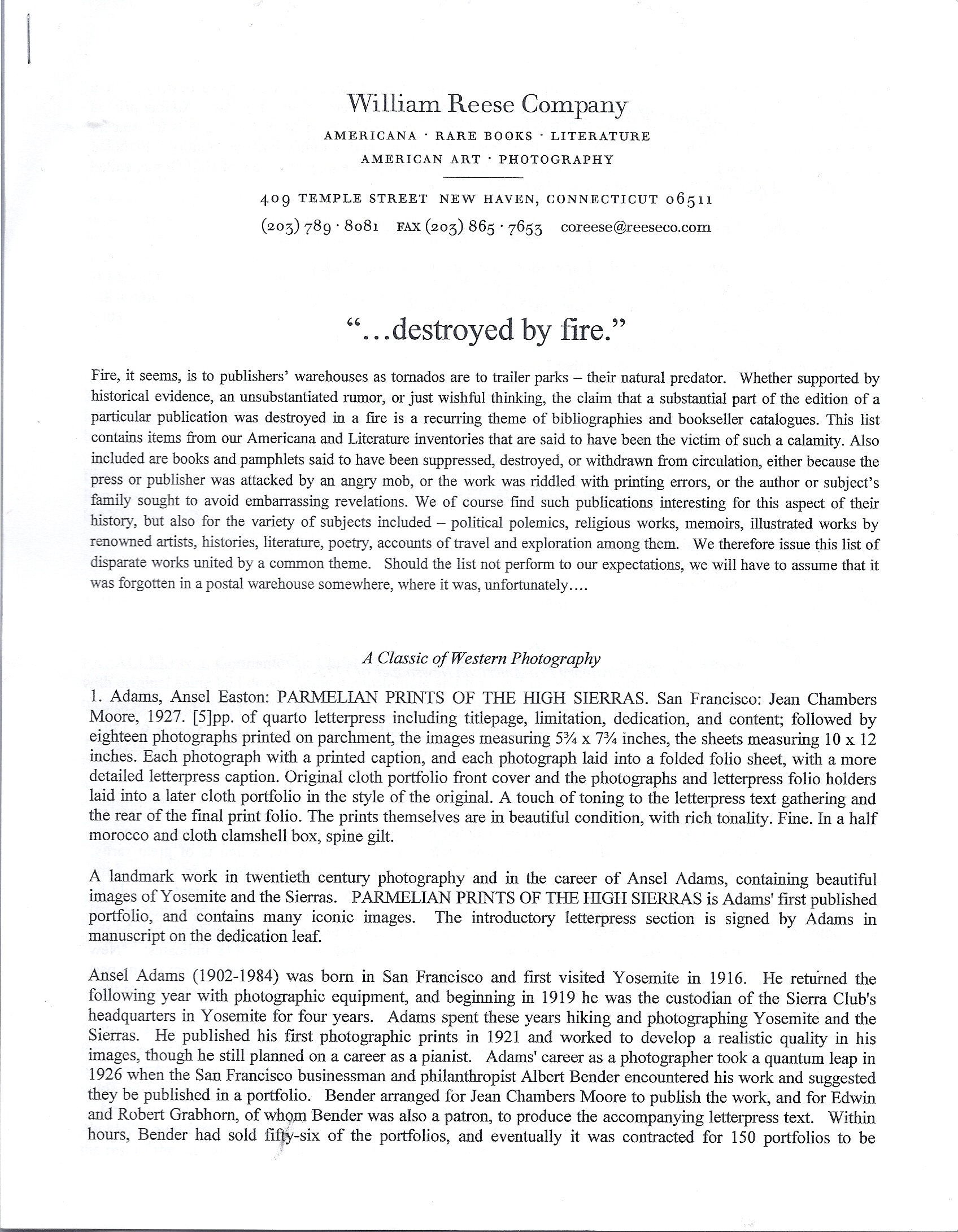 The William Reese Company has issued a listing of books under the heading, “...destroyed by fire.” As Reese notes, it is a recurring theme of bibliographies and bookseller catalogues that most of an edition's print run was destroyed by fire. It's as if, he notes, fire was attracted to publishers' warehouses the way tornadoes are drawn to trailer parks. Naturally, the implication is the book is very rare, and therefore, very valuable. However, this selection is not limited to works destroyed by fire. Any unnatural destruction of copies making the book rare will do. So, included among the listings, we find many titles that were partly suppressed, or at least according to legend were. And a few other destructive forces also appear, including several British books from around 1940 largely wiped out during the bombing of London. Here, then, are a few of these works that turned out to be rarer than anyone originally planned.

Item 27 told the public about what must have been America's first major political sex scandal. We have been fascinated by them ever since. Alexander Hamilton was America's first Secretary of the Treasury, close confident of George Washington, and a man with potentially a bright future on the national political stage ahead. Hamilton, like so many others, also suffered a weakness of the flesh. He had been messing around with one Maria Reynolds when her husband found out. James Reynolds didn't take it personally. He saw an opportunity to raise some cash and blackmailed Hamilton. News of Hamilton's payments to Reynolds was leaked, and accusations flew that the former Treasury Secretary had been using Reynolds as a conduit to personally speculate with public funds. Hamilton was forced to come up with an explanation for his payments to Reynolds to clear his name from accusations of corruption. All he could do was tell the truth. In his Observations on Certain Documents ...in which the Charge of Speculation Against Alexander Hamilton...is Fully Refuted, Hamilton explains, in detail, his affair with Maria Reynolds. The explanation cleared Hamilton's name of corruption, but the moral laxity displayed effectively destroyed any chance that Hamilton would ever achieve higher public office. Offered is a first edition of this pamphlet from 1797. Once everyone knew the truth, Hamilton's family bought up as many copies of the pamphlet as they could and destroyed them. An unauthorized reprint was published a few years later by his enemies to make sure the public did not forgive and forget. Priced at $2,000.


Item 40 is another book that was supposedly bought up to keep people from reading it, though the suppression does not appear to have been terribly effective. It is also a classic of the frontier wars between the cattle barons and small-time cattlemen still trying to run the open range. This culminated in Wyoming's infamous Johnson County War. The book is The Banditti of the Plains or the Cattlemen's Invasion of Wyoming in 1892, published in 1894. Author Asa Mercer had come to Wyoming to edit the Northwestern Livestock Grower, a journal published on behalf of the large ranchers. However, Mercer became angered by their treatment of the small-time cattlemen. The large ranchers accused their small competitors of rustling their cattle, and hired a bunch of Texas gunslingers to mete out their form of justice – including shootings and lynchings without benefit of trial. Mercer's expose was reportedly bought up and destroyed by the large ranchers whenever they found a copy, but while rare, a fair number must have escaped any attempt at suppression. $5,250.


Item 50 is an autobiography, but it is also one of the best accounts of life in early Illinois. John Reynolds was born in Pennsylvania, and spent his youth in Tennessee, but as a young man in the early 19th century, he settled in Illinois. He served as an Indian scout on the frontier, became a lawyer in the Illinois territory and a judge when it was admitted to the Union. He also served in the state legislature, the U.S. House of Representatives, and from 1830-1834 was Governor of Illinois. Reynolds was Governor at the time of the Black Hawk War. He was also active in business. Reynold's career paralleled that of early Illinois, making his biography a good look at life in Illinois at the time. His book is entitled My Own Times, Embracing Also, the History of My Life. It was published in 1855, but according to Howes, 300 of the 400 copies of this first edition were destroyed in the first Chicago fire (not the one started by Mrs. O'Leary's cow) in 1857. $1,350.


Item 22 is a book of which many copies were reportedly burned, but not accidentally. According to Howes, copies were officially burned in several American colonies. The book is A Candid Examination of the Mutual Claims of Great-Britain, and the Colonies: with a Plan of Accommodation, on Constitutional Principles. The author was Joseph Galloway, who had been Speaker of the Pennsylvania Assembly and a member of the Continental Congress. As the relationship between England and her colonies deteriorated in the early 1770s, Galloway believed a compromise was possible. He encouraged England to discontinue taxes and other practices that offended the colonists. However, he was also loyal to England, and felt its subjects were the freest people in the world. Ultimately, as the divide became greater, and then turned to total rupture with the Declaration of Independence, all of the American colonists were forced to choose sides. Galloway chose to remain loyal. He served with the British after they sent troops to America, heading their civil government in Philadelphia. After England abandoned Philadelphia, Galloway followed the British troops to New York, and in 1778 fled to England. He never returned. $4,500.


Here is a book which, according to colonial New England's most noted clergyman, was burned in Harvard Yard by the university's president. The Harvard President was Rev. Increase Mather, and the account was written by his son, Rev. Cotton Mather. The reason for their dislike of this book is apparent. Neither fares well, particularly Cotton. The book is More Wonders of the Invisible World, by Robert Calef. Published in 1700, though written a few years earlier, it is a response to Cotton Mather's Wonders of the Invisible World. The younger Mather had written about angels and witches and all sorts of inhabitants of the invisible world, who could wreak good or havoc on the visible world. Such beliefs are harmless enough until applied to the visible world, which Mather did in his support of the Salem witch trials. Calef was having none of this, and believed the trials were based on unsubstantiated claims, leading to the execution of innocent people, some, in his opinion, more righteous than the Mathers. These statements, and Calef's at times personal attacks on Cotton, incensed the Mathers, though it must be noted he suffered only a wounded ego, while his “witches” were hung until dead. It is hard to feel great sympathy. Cotton Mather wrote of Calef's book that it was a “wicked book,” “abominable Bundle of Lies,” and “invented and notorious lies.” Mather, at times, confused the words “lies” and “truth,” a condition from which many, both before and after him, have suffered. Calef, a merchant, evidently was not condemned by his neighbors, despite the vitriolic attacks from the Mathers, as he was selected to serve numerous posts in his town until the end of his life. Item 8. $17,500.


The William Reese Company may be reached at 203-789-8081 or coreese@reeseco,com. Their website is www.reeseco.com.