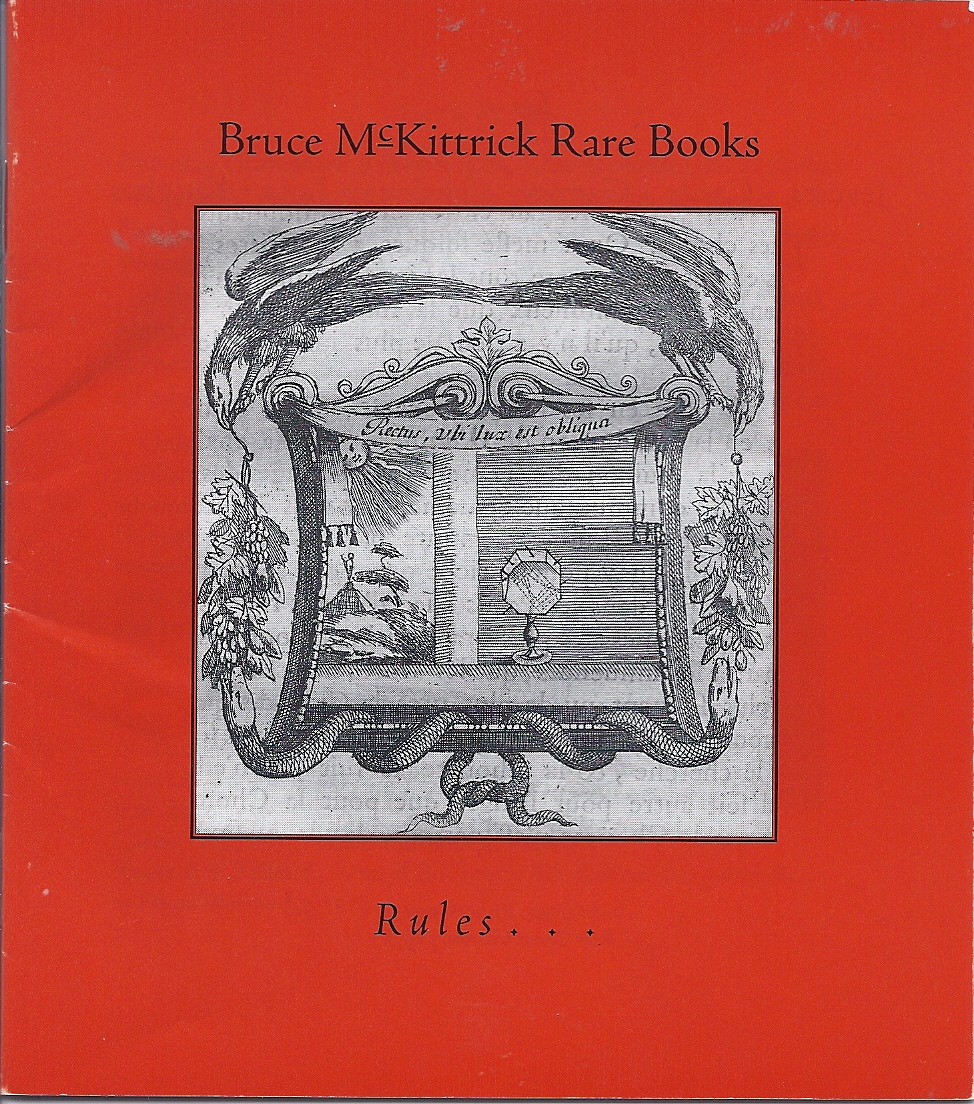 Bruce McKittrick Rare Books is offering a new mini-catalogue, this one entitled Rules... The selection is further defined as being “for... Jesuits, Cards, Games, Gardens, Jails, Knights, Life, Burials, Guilds, Literati, Poles, Cardinals, Crusaders, Princes, Students, War & Fools.” That does cover it, this being a small catalogue. These are antiquarian works, mostly from the 16th and 17th centuries, though they do range to as “recent” as the 19th. Many titles are in Latin, as one would expect for very old books, though the common European languages make their appearances as well. Here are a few samples of what, in accordance with the title, could be called Rule Books.

We start with the rule book for what became the most influential of all religious orders, the Society of Jesus, or as they are more commonly known, the Jesuits. Founded in 1534 by Ignatius of Loyola, the Society was designed to serve and be fully obedient to the Church in Rome. While there were printed versions of their rules at least as early as the 1550s, this 1583 edition represents the first complete rendition of the law that would guide the Order as they set about converting and teaching people in the far-flung reaches of the non-Christian world. As a result of their mission, the Jesuits would become instrumental in settling the New World, and preserving the early history of the people who inhabited the Americas. The title of this 1583 Latin book of the Society's rules is Constitutiones Societatis Iesu Cum earum Declarationibus. Priced at $3,400.


Here is a list of the rules for an institution with a very different purpose than the Society of Jesus. They are rules for the University of Marburg, founded a few years before the Jesuits. However, rather than fealty to the Catholic Church, this was the first Protestant university. It was founded by Philip I of Hesse, the German state. Philip was friendly with Martin Luther and adopted Protestantism. He confiscated real estate and books belonging to Catholic orders to form the university. The university was founded in 1527, but this first set of its laws was published in 1565, under the title Reformation und Ordnung. The University of Marburg is still teaching students today, though it no longer is tied to one religion. $14,000.


In 17th century France, several literary societies were established where certain learned and important folks could get together to discuss the issues of the day. The first was the French Academy in Paris, followed by various local academies around the country. The first such local group after the French Academy was the one in Caen, in northern France. It was established in 1652, and the next half century saw its membership rise and fall in accordance with events of the time. However, in 1705, its new leader, Nicolas Foucault, received an official designation the other groups did not have. He received Letters Patent from the King officially establishing the organization and recognizing its literary mission. Offered is a publication from that year, Lettres Patentes Avec Les Statuts Pour L'Academie Des Belles Lettres Etablie en La Ville De Caen. This booklet includes the letters patent, the rules of the organization, and Foucault's inaugural address. This copy was the personal copy of M. Foucault and contains his bookplate. $9,500.


Here is a set of rules less momentous than any of the aforementioned, but undoubtedly affecting far more people over the years: Rules for the Game of Croquet. Croquet, or at least its predecessors of different names, goes back to at least the 13th century, and even that was probably a derivative of games dating back to antiquity. However, it would not be until the 1860s in England that the popularity of the sport suddenly took off. For a decade or two, it became immensely popular, until surpassed by other games such as tennis. However, the limited physical exertion and accessibility to people of differing ages and sexes makes it a popular lawn game to this day. This set of rules, which may be the first complete printing of the rules of the modern version of the game, was published in 1862. $9,500.


These rules are of a far more serious nature: La Vera Militar Disciplina, by Imperiale Cinuzzi, published in 1604. These are rules of war, but not legalistic rules of the sort that will get you tried for war crimes at The Hague if you disobey them. They are the type of rules you should follow if you would prefer not to be defeated. McKittrick tells us Cinuzzi uses his years of military experience to discuss “assault, siege, bombardment, ambush, cavalry, artillery, infantry, signal systems, camp life, uniforms, barber-surgeons, pay, logistics, officer training.” $6,500.