Politics from the Left and Farther Left from Lorne Bair 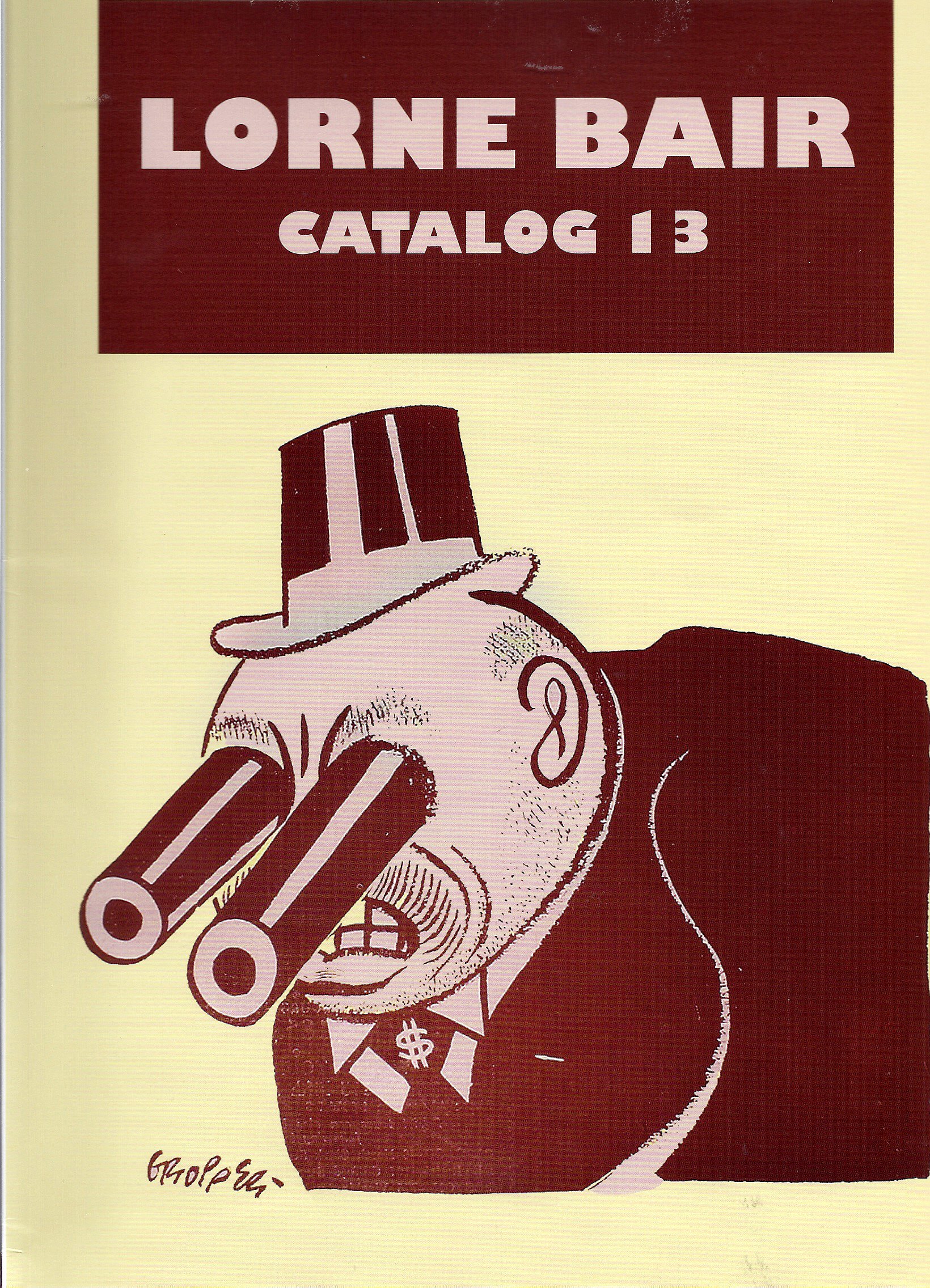 Lorne Bair has issued Catalog 13: Rare Books, Manuscripts, Art & Ephemera. While a title like that might imply any topic of material could be found, Bair's catalogues are very subject specific. The material almost always is political, and primarily from the viewpoint of the left, from traditionally liberal to outright radical. That is not to say there are no works from the other side of the spectrum. Bair offers a few, but in terms of overall numbers, this catalogue is about as “fair and balanced” as a Fox News broadcast. Material relates to the issues that have been the focus of the left for over a century, workers' and labor rights, civil rights, women's rights, anti-war from the Vietnam era, but pro-support of the Republican cause during the Spanish Civil War, utopian communities, socialism, communism, rather naïve belief in the democratic ideals of the Soviet Union in its early days, anti-colonial revolution, freedom from traditional sexual mores, and anarchism. Some of it may sound quaint, overblown, predictable repetitions of what we would today call “talking points.” Still, the pains of struggling, often beaten-down common people are hard to ignore, and those issues have never gone away, particularly in these recessionary times. This is a catalogue filled with voices rallying the “people,” and standing up to corporate interests, from back in the days before we realized that corporations are “people” too.

Item 45 is a 1957 publication from the Georgia Commission on Education headed, Highlander Folk School. Communist Training School, Monteagle, Tenn. The self-styled “Commission on Education” was formed by the state of Georgia in 1953 in response to the Supreme Court decision banning segregation of schools. Its purpose was to uphold segregation, and promote Georgia's view on the subject to the rest of the nation. The Highland Folk School was formed in nearby eastern Tennessee to promote equal rights and integration, and served as a training school for some of the best known leaders of the Civil Rights movement, including Martin Luther King, Ralph Abernathy, and Rosa Parks. Since the outright racism behind the Georgia Commission on Education and organizations like it could not be expected to play very well in the North, the modus operandi of such groups would be to label civil rights workers as “communists.” In the heat of the Red Scare era of the 1950s, that was considered a sure way to make people hate anyone who worked for civil rights. This piece is signed in print by Georgia Governor Marvin Griffin, a virulent segregationist devoted to stopping the integration of schools. $300.


Item 89 presents a surprisingly blunt plea for racial and ethnic tolerance at the end of World War II from the son of Italian immigrants who, though still a young man, had achieved enormous popularity as a teen-idol singer – Frank Sinatra. This piece is a 1946 reprint from Magazine Digest, headed Let's Not Forget We're All Foreigners. In blunt language we normally don't like to repeat, save for the good intentions of Sinatra in using them, the singer explains, “...when I was going to school over in Jersey, a bunch of guys threw rocks at me and called me a little Dago. I know now why they used to call the Jewish kids in the neighborhood 'kikes' and 'sheenies' and the colored kids 'niggers'...” Such a bold statement certainly must have been risky for Sinatra, but obviously it did not harm his very successful career. $250.


Item 66 is a biography of a man hardly beloved on the left, though perhaps he was not as bad as most of his contemporaries. The title is John D: A Portrait in Oil. John Winkler's 1929 biography could only be about oil baron John D. Rockefeller. Rockefeller was a shrewd businessman who managed to corner the world market for oil, a resource in rapidly increasing demand in the late 19th century. He could be a cutthroat competitor, although he often bought out competitors for prices that would make them wealthy too. Along the way, Rockefeller became a billionaire, in today's dollars probably the richest American ever. However, his monopoly control of this highly demanded resource turned Rockefeller into perhaps the most despised man in America by the turn of the century. Eventually, his Standard Oil would be broken apart by the government, divided into many smaller (though hardly small) companies. Since Rockefeller retained his share in each, it had no effect on his enormous wealth. Rockefeller retired early, and lived to be 97. It afforded him plenty of time to make amends to the public, and he spent the remainder of his life operating foundations that made enormous charitable gifts to worthy causes. Hence, Rockefeller concluded his life with a mixed reputation, part very good, part very bad. This biography added a neat touch to the cover. A circular hole is cut on the front cover at the location of the hand in Rockefeller's image. Placed inside the hole is a dime. Rockefeller used give out dimes to people he would meet, not a major sacrifice for a billionaire, but then again, a dime could actually buy something during his lifetime, which concluded in 1937. $350.