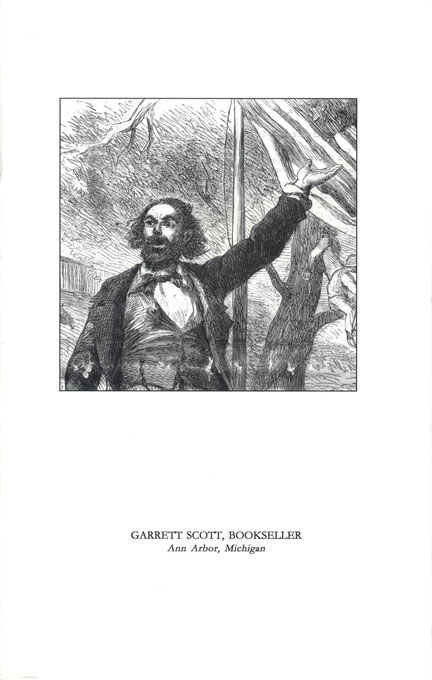 This month we review our first catalogue from Garrett Scott, Bookseller. Its title is "American Books," and it is one of the more interesting and entertaining rare book catalogues you will find. This is a collection of some of the most esoteric, eccentric, and downright strange books I've seen. Once you get past the first item, President John Adams' third State of the Union address, you will find a trove of oddities rarely found.

There are books of verse from 19th century amateur poets, people whose work could not be forgotten because few ever heard of them in the first place. Some of it is absolutely atrocious, but if there's one thing that's more entertaining to read than good poetry, it's bad poetry. There are many books and pamphlets in support of the temperance movement. We tend to forget the vehemence of support for prohibition of alcohol that existed in America for a century, until finally, the 18th Amendment took effect in 1920. This great victory turned into a practical disaster, and in 1933, the amendment was repealed. All of those years of work for the temperance movement proved to be for naught, but their often-shrill arguments are still interesting to hear today. Other publications in this catalogue cover religious issues of the time, "scientific" claims it's hard to believe sounded rational even in their day, and some of the paranoid fringe type of politics still heard outside the mainstream today. There is material here to start or build on many types of collections, and most will fit the means of the modest budgeted collector.

Jane Hudson; or, The Secret of Getting out in the World, of unknown author, published by the American Sunday-School Union in the 1850s, provides the heroine with this bit of motherly advice: "A woman may be very learned, very intelligent, very agreeable; but still, if she does not or will not attend to the sweeping, cleaning, darning, mending, &c. of her own family, she is as sadly out of the way, as glaringly deficient in all that would make her a truly complete and useful woman, as if she were dressed ever so richly, yet with holes in her elbows." I was going to show that to my wife, but I don't want to end up with holes in my head. Item 17. Priced at $50.

Dr. Winthrop Bowman presented this Lecture Delivered...May 11, 1882...Introducing his System of Respiration for the Development and Treatment of the Vital Organs of the Body. No question respiration is important for good health, but evidently the doctor had a particular method which could target specific organs for renewal, and purge the body of carbonic acid. I have a better suggestion for purging the body of carbonic acid. Stop drinking so much Coke. Item 27. $50.