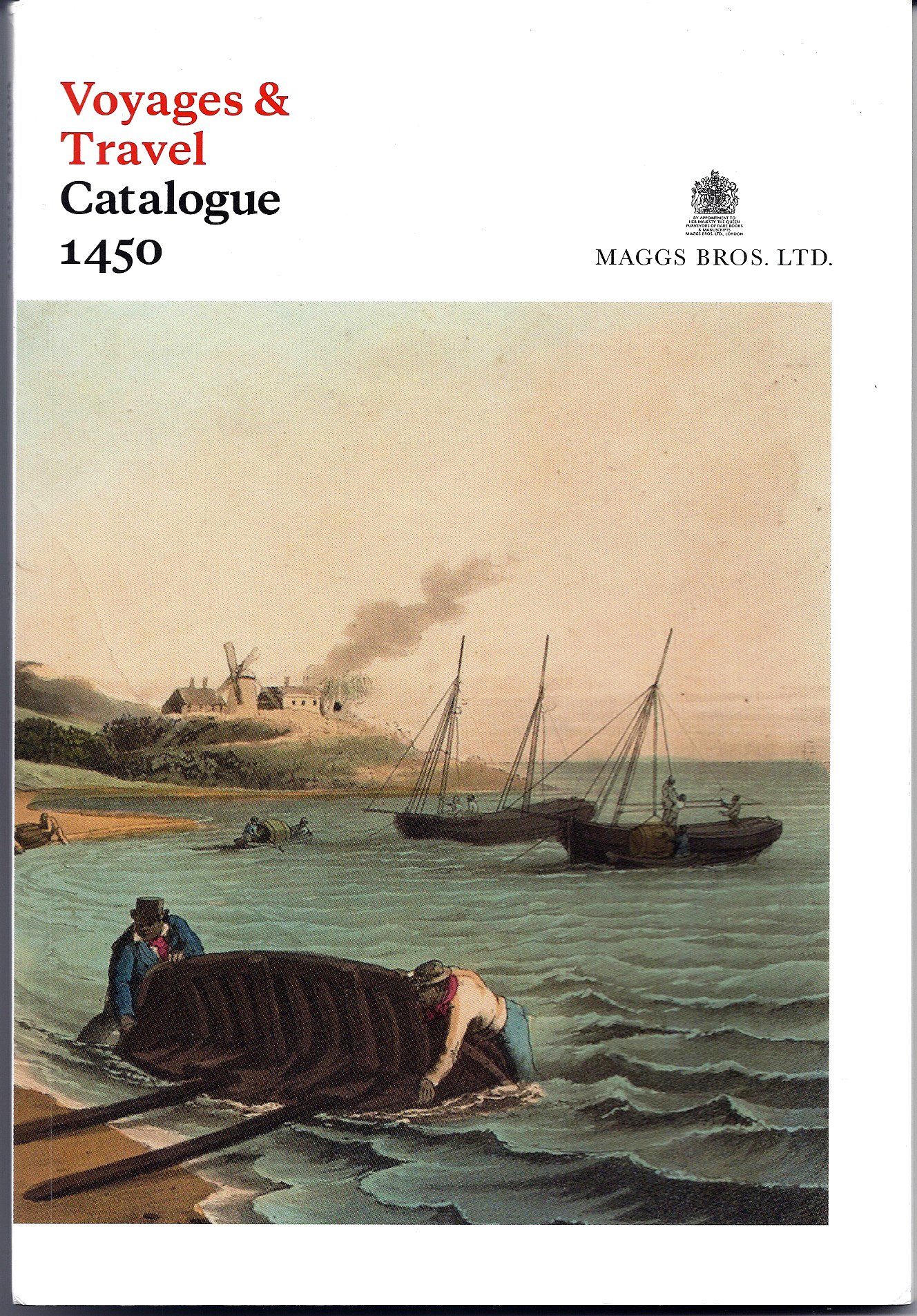 Maggs Bros. Ltd., has issued their 1450th catalogue, which can happen if you have been printing catalogues for a very long time. This one is titled Voyages & Travel, a field of enduring appeal to those fascinated by the process of discovery. While there are books here dating back to the early 17th century, the focus is on the period from the late 18th century through the early 20th. This was not so much a time of discovery of new worlds, but what lay deep within the borders of these far off lands. This could include explorations into the heart of Africa, or the frozen deserts of Antarctica. Humankind would not be satisfied until all of the mysteries of the far off corners of the earth could finally be known and explained. Here are some examples of the books and ephemeral material to be found.

Item 31 is an account of a long and productive journey: Narrative of a Voyage Round the World, performed in Her Majesty's Ship Sulphur, During the Years 1836-1842. The author, Capt. Edward Belcher, took command of the Sulphur early in the voyage when Capt. Beechey took ill. The first couple of years were spent primarily along the west coast of the Americas. After visiting Hawaii, they headed back to Alaska, and then down the coast of North America to California. From San Francisco, they embarked on a 31-day trip up the Sacramento River. Next, they would head west and the Sulphur would be engaged in the British operation in China which would lead to that nation gaining control of Hong Kong. Belcher's career would be marked by mixed reviews. Much was accomplished by this expedition, but Belcher never got along well with either his superiors or subordinates. His men found his treatment harsh, but Belcher was exonerated. A later journey to the Canadian Arctic, seeking the missing Franklin expedition, would lead to the loss of several ships and a court martial, but again Belcher was acquitted. Eventually, he would be knighted and named an admiral, though those came in his old age after he had essentially retired. Priced at £3,300 (British pounds, or roughly $5,181 in U.S. Dollars).


Another notable British explorer with a prickly personality was Sir John Ross. Ross concentrated in Arctic expeditions, and like Belcher, his final voyage was an unsuccessful attempt to locate the lost Franklin party. Ross also attempted to find a Northwest Passage, at which he was equally unsuccessful, and at one point managed to get himself stuck in ice for years. However, he escaped a hero when most of his men returned alive despite years in the frozen north. A notable achievement of one of his missions was the discovery of the magnetic north pole. In the almost two decades between his second expedition and attempt to find Franklin, Ross performed more mundane work. In 1840, he was serving as consul in Stockholm, not the greatest job in the world, and a position from which Ross felt he deserved a promotion. Item 84 is a letter Ross wrote to Lord Palmerston, then Foreign Secretary, attempting to secure the post of Governor of Van Diemen's Land, Australia. The post became available when, ironically enough, the aforementioned Sir John Franklin resigned the position. Ross was not a modest man, describing his qualifications and why he deserved appointment. He also touts his ability to get along with others, something not always appreciated by those who worked with him. Noting that Franklin's governorship “...had been bestowed on him as a reward for services of the same kind as have been performed by me,” Ross says, “I have laid my claims before Lord Melbourne [the Prime Minister] for that appointment, confident from the success I have always had in maintaining harmony, wherever I have been employed, I shall give unqualified satisfaction to the Colonists and to the Government.” Ross goes on to explain that his current position is “much less than I expected,” and it will not enable him to get out of his “Difficulties,” which he attributes to 30 years of service to his country. Palmerston has noted on the letter, “Sorry I cannot interfere P,” and Ross did not receive the appointment. £1,500 (US $2,356).


Not all voyages were taken voluntarily. Many of the settlers of the aforementioned Van Diemen's Land were taken there via “transportation,” British criminals, often just petty ones, taken to penal colonies in Australia. Those weren't even the worse. Item 12 is a broadside attack on slavery, from the time when it was soon to be abolished – 1807. The message states, “The persons employed as captors of the human species, who drag the Africans from their homes, and carry them to another country for sale, are guilty of the highest grade of felony.” However, the anonymous author does not limit his attack to those engaged in the slave trade, but to the “consumers of the proceeds of slavery” as well. In graphic wording he writes, “The feasts of the luxurious may be called banquets of human flesh and blood; and the partakers thereof considered as cannibals, devouring their own species...” £1,250 (US $1,965).