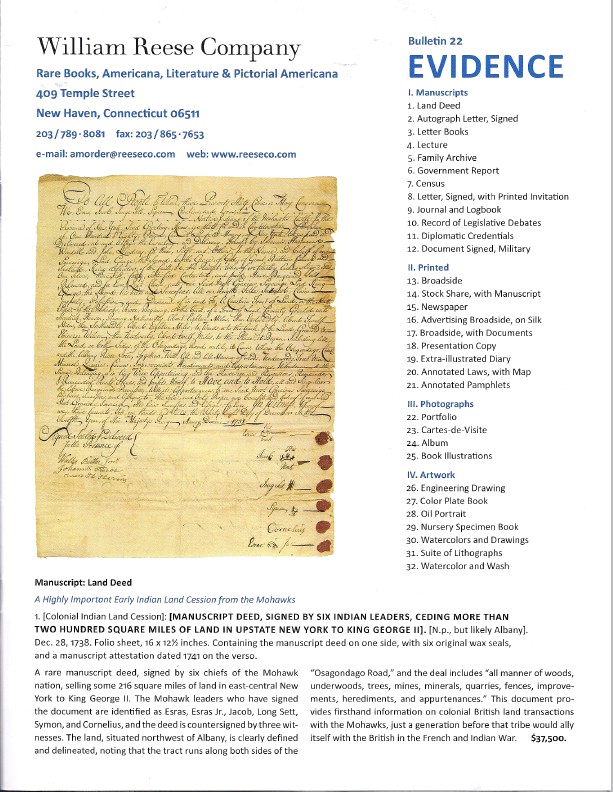 An Indian land sale on cover of Reese's Evidence.

The William Reese Company has issued their Bulletin 22. Evidence. That title derives from the nature of the material offered. It provides written or pictorial evidence of some place or event. There are handwritten accounts of events, photographs and drawings, broadsides, inscribed books and more. Each is a witness to its point in time. The William Reese Company specializes in Americana, and while that is not exclusively what they handle, this collection is focused on America. The dates range from colonial times to the early 20th century. Here are a few samples.

The item you see on the cover of this catalogue is a deed for land sold by the Mohawk Indians to King George II in 1741. The land is located northwest of Albany, New York. It consists of 216 square miles on the north side of the Mohawk River. It specifies that the land runs on both sides of the Osagondago Road, but I have not been able to pinpoint precisely where that road was located. The price was 180 pounds, and at less than a pound per square mile, that was a good deal, even in today's deflated real estate market. The document has been signed by six Mohawk leaders, including Chief Cornelius. The Indians renounce all rights to everything on the land, including "herediments and appurtenances." Did the Indians really know what "herediments and appurtenances" meant, or were they relying on verbal explanations as to what it was they were signing? Just asking. Item 1. Priced at $37,500.


Among the most valuable items of printed Americana are the compilations of western Indian drawings created in the 1830s and 1840s, as last-ditch efforts were made to capture their likenesses before traditional dress succumbed to American fashions. The most famous of these are the collections by McKenney and Hall, and George Catlin. However, one even rarer portfolio was created before either of these, and this artist was James Otto Lewis. Lewis began his painting in 1823, accompanying Governor Lewis Cass of Michigan to the Great Lakes region. In 1835 (dated 1836), Lewis began publishing The Aboriginal Port Folio, or a Collection of Portraits of the most celebrated Chiefs of North American Indians. It was to be published in ten installments of eight portraits each, and the parts were released quickly, possibly for fear of losing sales to the McKenney and Hall collection scheduled to be released later in 1836. However, the publisher ran into financial problems, and the tenth installment was only printed in a small number of copies, the eleventh, text volume not at all. The result is, other than the portraits, the portfolio consists only of a title page and three advertisements beyond the portraits themselves. Most copies extent do not have the tenth installment, thus having only 72 portraits, and of the few that do, only two are known to contain the title page. This is one of two known complete sets. Item 27. $450,000.


If you were a politician, how would you react to a letter informing you that your main rival had just been ensnared in a sex scandal, one that would undoubtedly destroy his hopes of ever achieving higher office? Would you be happy, sympathetic, or maybe both? One can only wonder how Thomas Jefferson reacted to this letter from his friend John Barnes in 1797. Barnes notifies Jefferson that his political rival, Alexander Hamilton, has admitted to a series of indiscretions with another man's wife. It would assure that Hamilton would never run against Jefferson when the latter sought higher office. Hamilton had made payments to the woman's husband, and accusations were made that he was using public funds for political advantage. In order to dispel these rumors of corruption, Hamilton was forced to reveal the bitter truth - that these were bribes to the woman's husband to keep him from talking about the affair. Hamilton was upright in his public life, even while not being so in his private one. Barnes had included a copy of Hamilton's published confession (no longer present) with his letter. Item 2. $16,500.