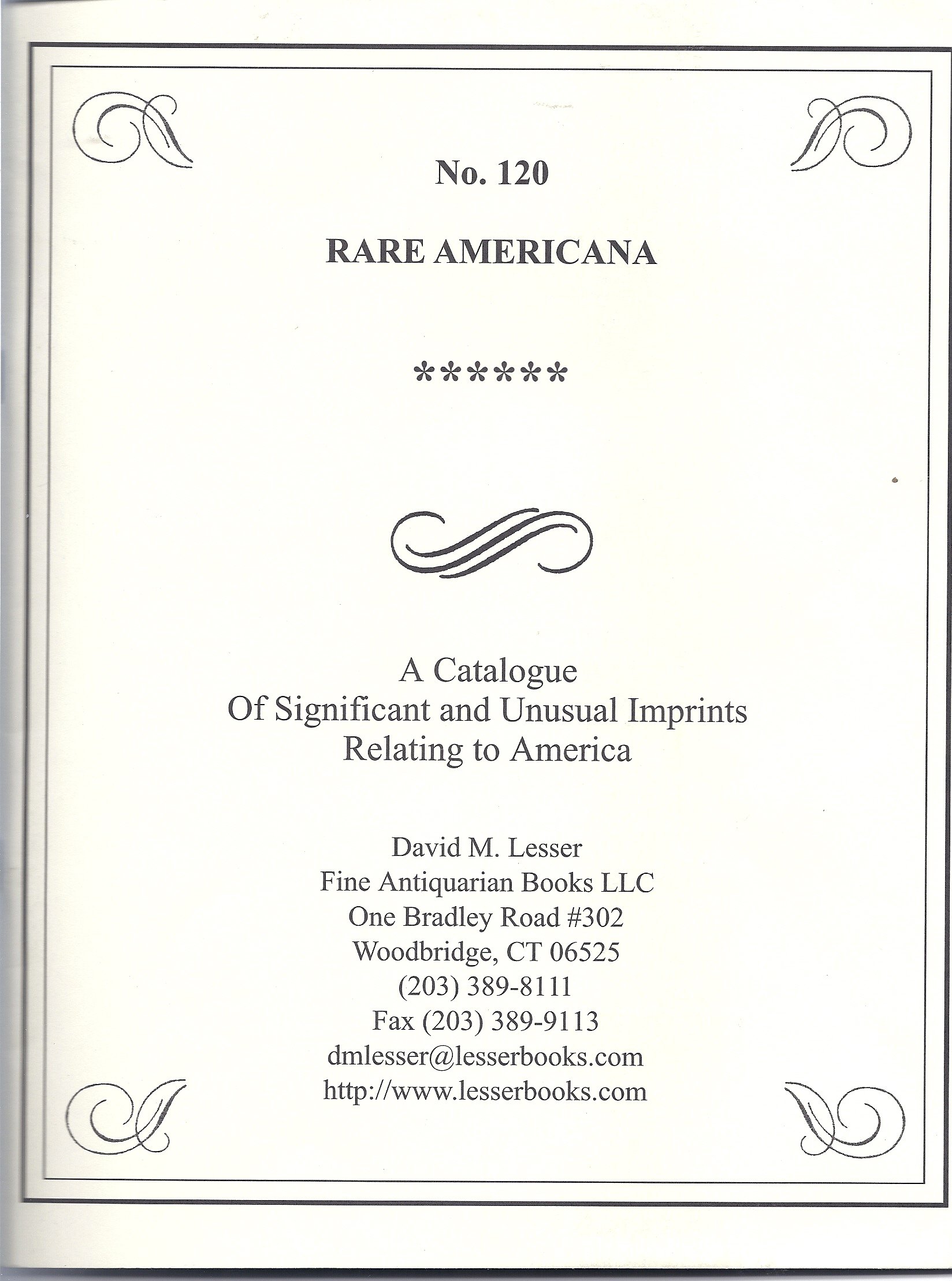 David M. Lesser Fine Antiquarian Books has published their 120th catalogue of Rare Americana. What Lesser offers is primarily ephemeral type publications - pamphlets and broadsides - naturally pertaining to America and mostly from the 18th and 19th centuries. A great many relate to the two major events in America during those centuries, the Revolutionary and Civil Wars, or about the controversies and disputes that led to those two momentous national divisions. America may have its share of controversy and contention today, but this is nothing new. Here are some samples of issues faced at another time.

Evidently there wasn't much in terms of medical regulations or truth in advertising in the 1880s when this piece was likely printed: Look-Listen. The Greatest Boon of All Times. Autrey's Mineral Tonic, Known in Some Places as Vitona, Mineral Tone, Turkey Mountain Mineral, Etc. In other places it was probably known as fraud, but Dr. B.C. Autrey doesn't mention this. He claims it has been tested by thousands and found useful for "Rheumatism, Gout, Kidney Troubles, Indigestion, Gatarrh, Piles, Exzema, Diabettes, Inflamed Sore Eyes, Blood Poison, Old Sores, Flux, Constipation, Female Complaints, from childhood to old age." If that's not enough, it also cures fits, toothache, nervous troubles, pelagra, dropsy, spine and nerve disabilities, skin eruptions, poison, and insect stings and bites. As Dr. Autrey quite rationally observes, "Why take chances. Thousands dying every day, others getting well. You may have at least an even chance, it cures thousands of others every where, it might cure you…" And then again, it might not. But, it only cost a dollar, giving the poor "the same chance as the millionaire." The same chance to be fleeced, anyway. Item 8. Priced at $150.


Item 71 is a rare account of one of New York City's most shameful moments, perhaps its equivalent to the Salem witch trials: A Journal of the Proceedings in the Detection of the Conspiracy Formed by Some White people, in Conjunction with Negro and Other Slaves for Burning the City of New York in America, and Murdering the Inhabitants. The author was Daniel Horsmanden, one of the judges at the trial, who applied pressure and rewards to convince people to testify against others, and undoubtedly, make up stories to protect themselves or advance their interests. A series of fires broke out in New York in the spring of 1741. It had been a rough winter in New York, poverty and hunger was rampant, England at war with Spain. At the time, around one-sixth of New York's population was slave, and fear of a slave revolt was always present just below the surface. Whether there was a planned revolt, or cooperation between slaves and poor whites, is debatable, but if there was, it was hardly on the scale that the white aristocracy imagined. Charges were made by intimidated witnesses, show trials held, and executions followed. It is estimated around 18 blacks and 4 whites (including 2 women) were hanged, and 13 blacks burned at the stake. Yes… burned at the stake. Around half of the city's adult male slaves were at one point charged, and many were shipped off to places like Newfoundland. By the end of the year the controversy had run its course, and this is not the kind of historic event New York much likes to recall. Offered is the rare first edition of Horsmanden's first-hand account of events, published in 1744. Included is an unrelated document signed by Horsmanden in 1768. $25,000.


Item 41 is an upbeat message from Jefferson Davis: Message of the President. To the Senate and House of Representatives of the Confederate States. This message was presented in January of 1863, and things were still looking fairly good for the Confederacy. As Davis points out, "At Vicksburg another formidable expedition has been repulsed with inconsiderable loss on our side and severe damage to the assailing forces." Vicksburg, high on a bluff, was perhaps the most important location in the Civil War. It enabled the Confederacy to control traffic on the Mississippi. Union shipping could not pass the bends in the river below Vicksburg because the Confederates could rain artillery fire from above. Additionally, it enabled the Confederacy to connect its western regions, and food supplies, to the armies fighting in the east. Vicksburg proved to be an impenetrable fortress, enabling Davis to crow about their success. However, by early that summer, unable to penetrate the fortress, Grant laid siege, eventually forcing the Confederates in Vicksburg to surrender. The tide had turned. $250.