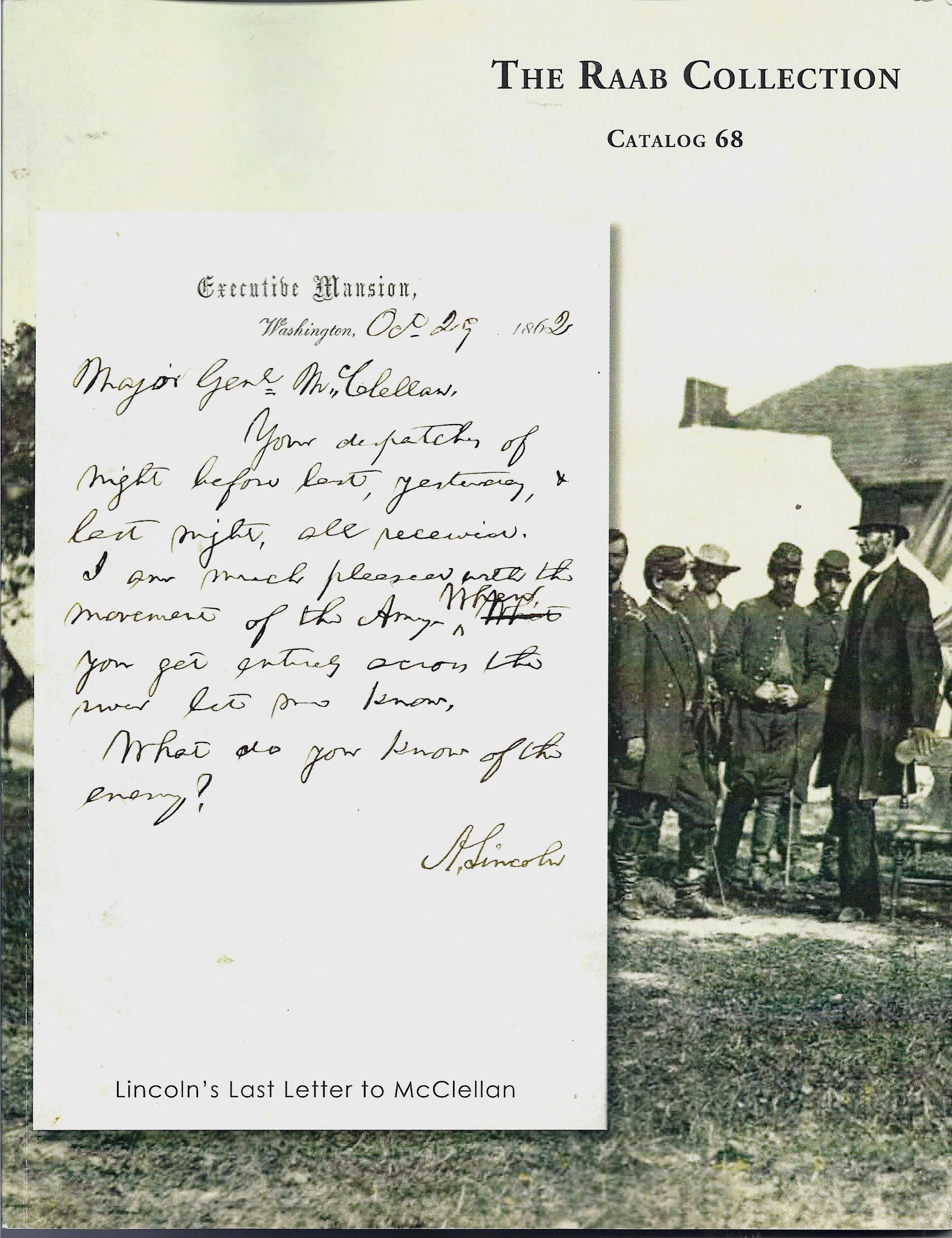 The Raab Collection has issued Catalog 68 of important signed documents. Most emanate from America, although there are a few of European origin. They all pertain to important personalities or events in history, often mostly from political leaders, but including items from the pen of great scientists, literary and humanitarian figures. Here are a few of these one-of-a-kind signed documents.

Pictured on the cover of this catalogue is President Lincoln's last letter to George McClellan as leader of U.S. forces during the Civil War. It is dated October 29, 1862. When Lincoln arrived in Washington to take his oath of office, the South had already announced its secession. The new President faced rebellion with an army not well prepared for such internal strife. It was led by General Winfield Scott, a great military hero who had served as far back as the War of 1812. However, he was now 74 years old, had numerous medical problems, and weighed around 300 pounds, leaving him hardly fit for battlefield command. That responsibility would soon go to General McClellan. McClellan, a good organizer, would prove to be a conservative commander, unwilling to take quick action when conditions called for decisiveness. As time went on, Lincoln, without military background, came to have more faith in his own military decisions than those of his commanders, first McClellan, and then several of his successors. In this letter to McClellan, Lincoln responds to news that McClellan, at his orders, has been moving his troops across the Potomac in anticipation of an assault on Richmond, the Confederate capital. Lincoln wanted McClellan to move his forces between those of Robert E. Lee and Richmond, thereby hindering its defense. The President still sounds satisfied, writing, "I am much pleased with the movement of the Army. When you get entirely across the river let me know." However, McClellan moved slowly, Lee anticipated and reacted quickly, and the plan fell through. That was the last straw for Lincoln, who removed McClellan from his command a week later. Lincoln would go through several more generals before finally finding Ulysses S. Grant, who shared Lincoln's belief in bold action. Item 5. Priced at $100,000.


President Lyndon Johnson was far more pleased with the performance of General William Bunker during the Vietnam War, but if the Civil War made Lincoln a great president, the Vietnam War would destroy what might have been Johnson's great presidency. Johnson was a master at domestic policy, but the war would be his undoing. In this March 2, 1966 letter, Johnson writes Bunker, who oversaw much of the massive build-up of troops, "I am sure that military history will record the movement of American troops to Vietnam as the high water mark in logistics planning." Perhaps history would have had the war turned out differently, but Johnson was unable to achieve victory as Lincoln had. Item 19. $3,000.


If Lincoln's wartime demands seemed terribly difficult, those faced by Winston Churchill seemed almost impossible. Europe overrun by the Nazi war machine, America sitting on the sidelines, England stood alone in 1941 in defending the world from the unspeakable tyranny consuming it. It didn't matter to Churchill, who remained steadfast in his determination to win the war no matter the odds. There simply was no choice. In November of 1941, the month before America entered the war, an election was held in Harrow, where Churchill had once attended school, to fill a seat in Parliament. Though Churchill headed a national unity government, he still wrote a letter to the Conservative candidate, Norman Bower, in support of his candidacy, as Bower was more strongly supportive of Churchill's policies. The opposition, Churchill felt, though in broad agreement with him, engaged in petty sniping he felt disruptive to the united cause. In his letter to Bower, Churchill speaks with his usual wartime inspiration and brilliance: "We are engaged upon the Herculean labour of rescuing Europe and saving ourselves from the unspeakable 'New Order' and all the abominations that go with it." Item 25. $28,500.