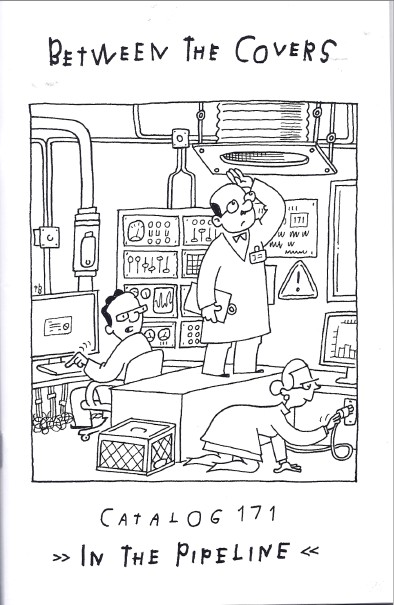 Between the Covers Rare Books has issued Catalog 171, dubbed In The Pipeline. This is a collection of new acquisitions that have been flowing, so to speak, onto their shelves. This is not the most expensive of material. As they explain, "There's nothing here of stunning rarity… Instead, with this catalog we offer much with which to fill in gaps in your collection."  However, what is offered is not just ordinary copies either. Most are signed, and if not, they are items difficult to find in collectible condition. One more thing - "we're also doing our part to help the economy by studiously trying…to offer these at temptingly realistic prices."

The catalogue breaks into six sections, though over 80% falls into the first category:  Literature and Miscellaneous Non-Fiction. The other sections offer Children's Books; Mysteries and Detective Fiction; Photography; Science Fiction, Fantasy and Horror; and Westerns. Now, let's take a look between the covers.

Item 303 is a 1931 first edition of a play that achieved modest success on Broadway that year:  Green Grow the Lilacs. The writer was Lynn Riggs, of part Cherokee descent, the first American Indian to achieve significant success as a playwright. Riggs was born in 1899 in the old Indian Territory, which eight years later would become the state of Oklahoma. His play was set among the farmers who lived in the Oklahoma Territory, soon to be the 46th state. Though only a minor success on Broadway, Richard Rogers was intrigued by the story, and began his first collaboration with Oscar Hammerstein to produce a new group of songs to make the play a modern musical. They renamed the play Oklahoma! and it became the longest running play yet on Broadway after opening in 1943. Priced at $450.

This next play was sort of the anti-Oklahoma! Rather than portraying a group of mostly wholesome country folks, it focused on a community of urban, gay men. That may not sound too daring today, but when it opened in 1968, it was a pioneering work on the subject matter. Mart Crowley's The Boys in the Band was not suitable for Broadway at the time, but did achieve a long run off Broadway, eventually resulting in a film of the same name. The play is focused on the lives of six gay men and the often brutal interaction among them. Item 75. $350.

This one appears in the literature and non-fiction section, though I don't know which applies to it. The title is Come and Knock on Our Door:  A Hers and His Guide to Three's Company, published in 1998. I don't think "literature" really describes the episodes to this popular '70s-'80s sitcom, so the stories must have been true. This copy has been signed by author Chris Mann and Joyce Dewitt, who played one of the two women among the three. Item 358. $275.