The American West, Fiction, Art and More from Back of Beyond Books 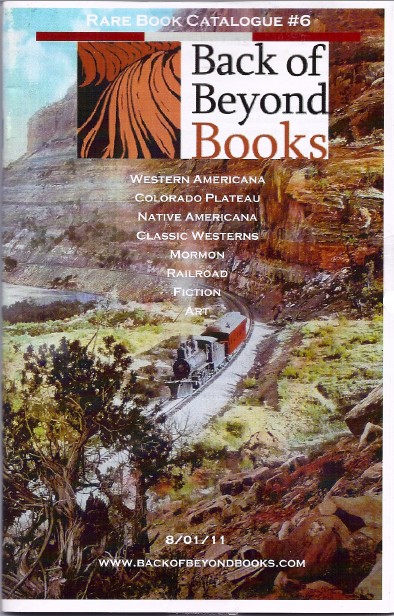 A railroad train rambles up Ruby Canyon on the cover of Catalogue 6.

Back of Beyond Books recently published their Rare Book Catalogue 6. The Moab, Utah, based bookseller opens their catalogue by noting, "we're experiencing one of the wettest and muggiest summers that we can remember." Really? I read this in Texas, barely a day's drive away over I-40 and up the old Devil's Highway (before fearful bureaucrats changed its number from Route 666 to something bland and inoffensive). We are experiencing a draught of historic proportions. What's going on here? Is the Devil toying with us?

Anyway, Back of Beyond features books about its corner of the world, particularly eastern Utah and western Colorado, along with the Four Corners region. It is an area of spectacular beauty and one of the last parts of continental America to be explored. However, Back of Beyond expands beyond its own borders, also offering books pertaining to the broader reaches of the American West, to Native Americans, the Mormons who settled most of Utah, railroads, Western fiction, general fiction, and art. These are a few selections from this latest catalogue.

Robert LeRoy Parker was a Utah native who knew many of the back reaches of Back of Beyond's territory, stretching from Montana to Arizona. He knew the good hiding places because Parker made a career of robbing banks and trains throughout the West. You may not recognize his name, but probably will know his alias - Butch Cassidy. Cassidy, his cohort, the Sundance Kid, and the rest of the Wild Bunch wreaked havoc across the West, and when the heat became too great, they hightailed it to South America. After several robberies there, they were surrounded and killed in a shootout in 1907. That's what most people believe, although there were always those who questioned the identification of the bodies. For years, Cassidy sightings were reported. Supposedly, Cassidy returned to America, may have worked under the name William Phillips in Spokane, and supposedly participated in a family reunion around 1925. These stories were resurrected in just the past few weeks when an old manuscript by Phillips was discovered bolstering these claims. Phillips writes as a friend of Cassidy, but some believe his knowledge of details of earlier events in Cassidy's life could only have come from Cassidy himself. One who believed Butch had survived South America and returned was Lulu Parker, Cassidy's sister. She claimed he lived until 1937, but was not Phillips. Ms. Parker wrote a book about him, Butch Cassidy, My Brother, and she has signed and inscribed this copy of her 1975 book (Lulu was Cassidy's younger sister and she lived to be 96). Item 4. Priced at $50.

Item 78 is a Guide to the Route Map of the Mormon Pioneers from Nauvoo to Great Salt Lake, 1846, 1847. It was designed to provide textual explanation of the route map (not included). The author of this 1899 publication was Orson Pratt. Pratt was one of the earliest converts to Mormonism, joining the Church and becoming associated with its founder, Joseph Smith, in 1830, the Church's first year. Pratt would serve numerous missions, mainly in England, and would publish several newspapers and books defending the faith. He would also have a falling out with Joseph Smith after the latter announced his position on polygamy, but Pratt would rejoin the fold and serve until his death in 1881. Pratt was one of the leaders of the advance party for the Mormons' great migration from Nauvoo, Illinois, to the Great Salt Lake Valley, reportedly the first to enter. He kept detailed notes of the trek, so when this map was published 18 years after his death, his notes of the journey were used for the accompanying guide's text. $100.