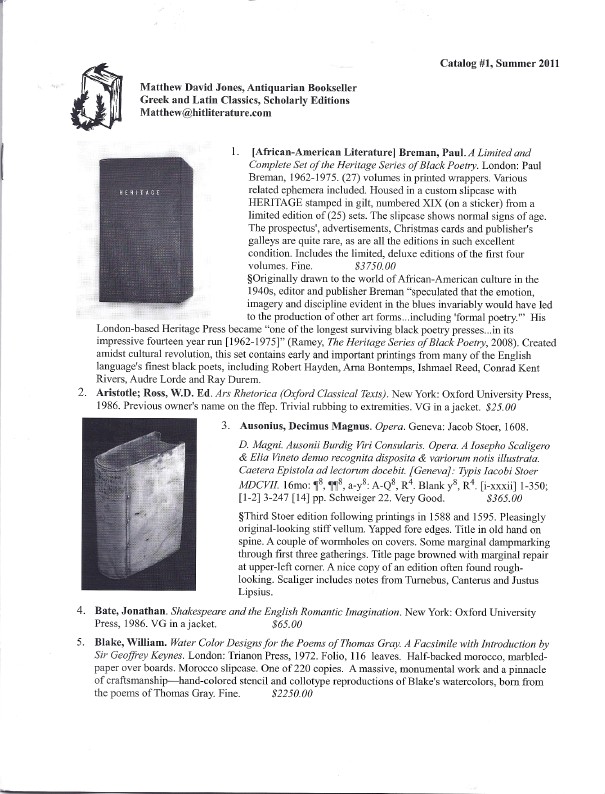 This month we review the first catalogue from Matthew David Jones, Antiquarian Bookseller. It is appropriately named Catalog #1, Summer 2011.

This is the first venture into cataloguing for the San Francisco based bookseller and it is a welcome addition. In an era when fewer and fewer dealers ever use the printed word to sell the printed word, the traditional catalogue is a reminder of what it is that still makes books something more than digital impulses. It shares a heritage with printed books to a common ancestor - Johannes Gutenberg.

Jones describes his specialties as Greek and Latin classics, along with scholarly editions. These fields are well represented in the catalogue, but there is also a smattering of works from various unrelated fields to be found, including African-American literature, poetry, children's books, and even a history of the game of chess. In terms of era, there are no limits, with books offered that range from the 21st century all the way back to the early 16th. Here are a few of the items we found in this first catalogue of books from Matthew David Jones.

Item 54 is an early edition of what was for centuries probably the most popular work of ancient Rome, Dictorum et factorum memorabilium libri novem (Memorable deeds and words). The author was Valerius Maximus, and if his name and work don't instantly ignite widespread recognition, it is because later scholars have trashed the once extremely popular and respected writings of this otherwise obscure Roman. Valerius wrote during the first half of the first century. He was born of a poor family, but managed to obtain the patronage of a Roman diplomat. At some point along the way, he began writing his stories. They were essentially morality plays based primarily on Roman history, although some used events from ancient Greece and elsewhere. As is typical of writers of every age, right up to the present, he criticizes the debased values of the "modern" generation as compared to earlier ones. These stories were probably quite popular during Valerius' time, but perhaps their greatest recognition came many centuries later. There were more manuscript copies of his writings floating around the monasteries of Europe during the Middle Ages than there were of any other Roman writer. Even as printing turned the Dark Ages into the Era of Enlightenment, Valerius remained very popular. However, his reputation has not survived the scrutiny of later scholarship very well. Deeper examination of his writing finds that he fabricated part of his history, and was at times inconsistent. He was like Parson Weems and George Washington's cherry tree - making stuff up to make a moral point. Meanwhile, the quality of his writing also has been criticized, Jones noting it has been described as "shallow, sententious, and bombastic, full of the boldest metaphor and rhetorical devices of the Silver Age." "Tedious," "careless," "unintelligent," "ideological," and "sycophant" (towards higher officials) are other words that have been used to describe Valerius' writings. Nonetheless, his influence was widespread and significant for many centuries, and for that he remains an important if not scholarly figure. Item 54 is the third Aldine edition of his one and only work, published in 1514. Priced at $6,750.