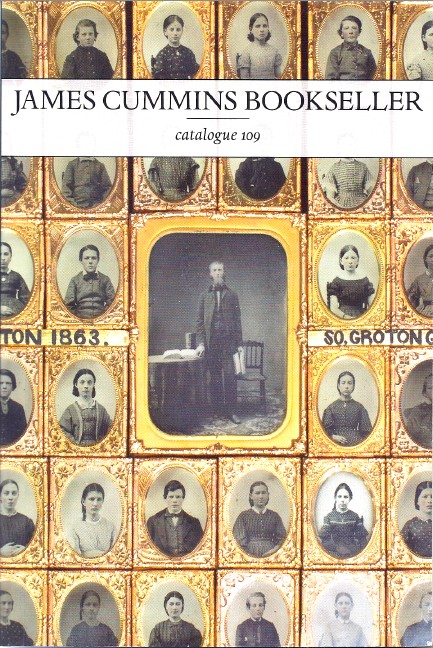 James Cummins Bookseller has published catalogue 109. This is a wonderful collection of mixed material, hard to pin down because of its variety. History and literature are to be readily found, as are many manuscript items - letters, personal accounts, speeches, and the like. Suffice it to say this is fascinating and significant material, definitely worth a look. Here are a few samples.

Item 92 contains the signature of a rural farmer, sometimes carpenter, a man who made little mark during his life and died an unknown. It is valuable, not because of Thomas Lincoln's achievements, but because of those of his son, Abraham. Signatures of Thomas Lincoln, who moved around from Virginia to Kentucky to Indiana and Illinois, are rare, as might be expected from an obscure early 19th century farmer. Lincoln was essentially uneducated, but as this document attests, could sign his name. It is a promissory note, and Lincoln has signed as a witness. It is dated 1801, almost eight years prior to the birth of his famous son. Abraham Lincoln was not close, at least emotionally, to his father, who was not warm towards his children, nor appreciative of young Abe's interest in book learning. Thomas was more interested in his son's contributions to the family in the fields. Abe was close to his mother, and after she died, his stepmother, both of whom appreciated his intellectual skills more than did his father. Item 92. Priced at $5,000.

What you see pictured on the cover of this catalogue is 62 framed ambrotype portraits of students at the South Groton (Massachusetts) Grammer School in 1863 (fortunately, this was a "grammer" school, not a spelling one). To that is added a large, center portrait of their teacher. Androtype was a film process popular in the 1850s and 1860s whereby a positive image is created on a glass plate, which is sealed in place, usually with a second sheet of glass. The photographer is listed only as "Ross," evidently H.P. Ross, a local photographer at that time. South Groton, also known then as Groton Junction, is today's community of Ayer. Item 139. $15,000.

Item 33 is a letter from noted inventor George Washington Carver to a student, Rebecca Caudhill, in response to three philosophical questions. Miss Caudhill has asked such difficult questions as, "Does truth exist only in the abstract," and, "What is necessary to have a knowledge of things." In part of his answer, Professor Carver, a man of deep faith, explains, "…each and all of the above perplexities will be made clear in proportion to the rapidity and the nearness with which we live in accordance with the wish of the "Great Creator"; thus losing the finite and taking on the infinite." And you thought all he did was make things out of peanuts! $1,000.

When asked for advice, Vice-President (and future President) Calvin Coolidge, "Silent Cal," was much less complicated. When 18-year-old D.M. Stoner asked for advice on how to live, Coolidge was able to concentrate what to do into a concise nutshell:  "All you need to do is WORK and SAVE YOUR MONEY. Just two things." Actually, the advice was slightly more complicated as Coolidge also recommended Stoner purchase some life insurance. Item 43. $1,250.