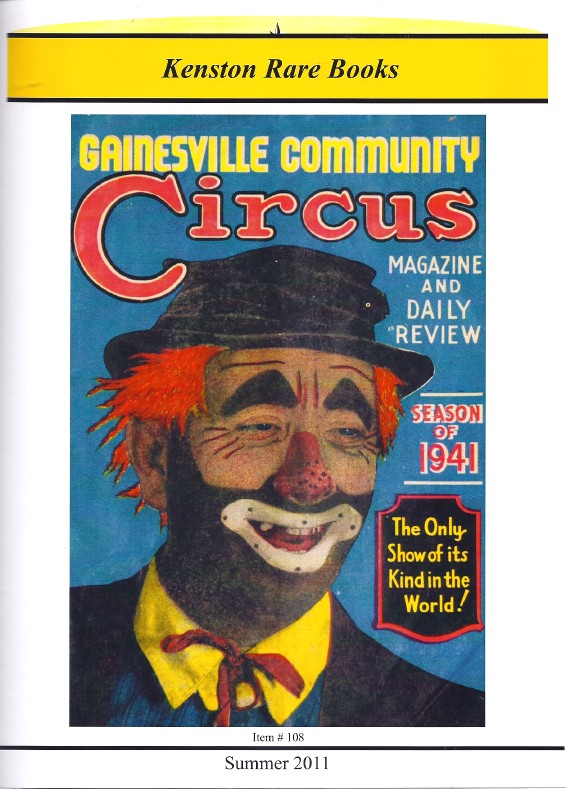 Books from Texas and the West from Kenston Rare Books.

Kenston Rare Books has issued their catalogue for Summer 2011. It comes with the subtitle, Fine Books on Texas and the American West. This is predominately a catalogue of Texiana, yet other areas of the American West are well represented. We find books going as far east as Florida (who knew Florida was cattle country?), west as California, and north all the way to Canada. While the geography is wider than Texas, the topics, from cowboys and cows to gunfighters and lawmen, are quintessentially Texan. Here are a few of the items that you will find.

There were a couple of ill-fated attempts to start a community of Frenchmen in Texas. Item 267 is a tale of one of those accounts:  The Story of Champs d'Asile as Told by Two of the Colonists… This first edition in English was edited by Fannie Ratchford and published by The Book Club of Texas in 1937. Something in the area of a couple of hundred officers and others who had served Napoleon attempted to settle along the Trinity River in 1818. They built a fort, and planned to do some farming to make a living. The Spanish, still in control of Mexico (including Texas) at the time were not amused to see a French settlement on their land. They marched toward the Frenchmen's fort, and figuring they would be seriously outnumbered, the French decided they best move on, and quickly. They hightailed it back to Galveston, from which they sailed back to Louisiana with help from the French pirate Jean Laffite. Priced at $225.

The French refugees came to Texas a little too soon. Had they waited a little over a century longer, they could have attended the Gainesville Community Circus, much more pleasant than dealing with angry Spaniards. Item 108 is Gainesville Community Circus Magazine and Daily Review - the Only Show of its Kind in the World! This 1941 publication (pictured on the catalogue's cover) describes this unusual community circus put on by the good folks of Gainesville, Texas, near the Oklahoma border. The circus began in 1930 when the Gainesville Little Theater, in debt and needing to find a source of funds, decided to try putting on a circus. It was an immediate success. Indeed, it was so successful that the show hit the road. It performed around the country, despite the fact that all of its performers were unpaid amateurs from the tiny North Texas community. The circus garnered great attention and admiration through the 1930s and 1940s, but after a bad fire, the death of its founder, and popularity of a new invention called TV, the circus was forced to wind down, and closed in the late 1950s. $85.

Gainesville wasn't always such a fun and happy place. Item 20 is The Great Hanging at Gainesville, the Texas State Historical Association's 1961 reprint of a book by Thomas Barrett first published in 1885. The Great Hanging was a truly ugly affair. Confederate authorities believed Union sympathizers in North Texas were planning an attack, and proceeded to round up dozens of locals they thought were involved. Many, if not most, were not, but it didn't matter. Trials, featuring a majority of slave owners on the jury, were conducted, and sentences carried out swiftly. Forty men were hanged, two others shot trying to escape. The affair proved to be an embarrassment for Jefferson Davis and the Confederacy, who were trying to paint the Union as brutal. The author of this book, Thomas Barrett, was one of the jurors, and he maintained the jurors were a reasonable bunch and that, but for his influence, many more would have been executed. $85.