An Extract of Ephemera from Marc Selvaggio 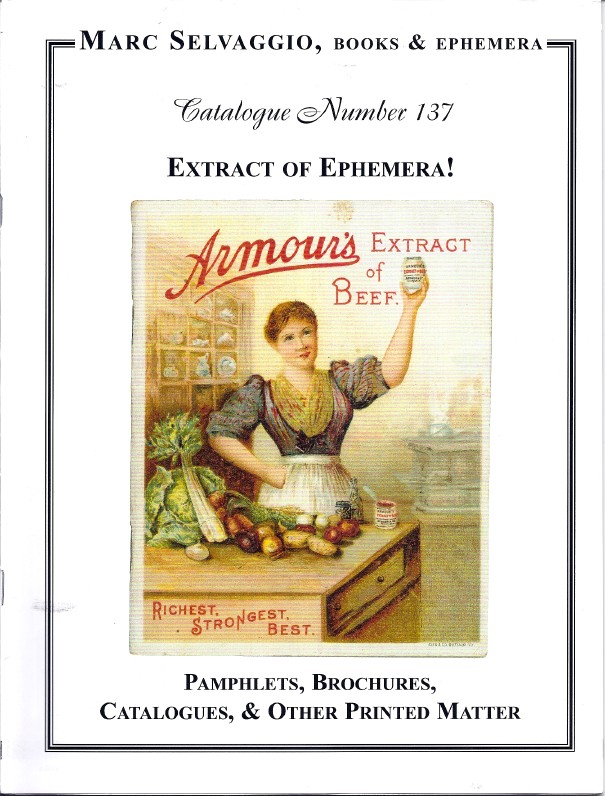 Marc Selvaggio, Books and Ephemera, has issued their Catalogue Number 137 Extract of Ephemera! That odd title can be explained by the ephemeral brochure pictured on the cover, promoting Armour's Extract of Beef. I do not know what they extracted from the beef to produce it, nor do I want to know, but undoubtedly it made everything better. And so will these pieces do for your collection of ephemera. They will certainly beef it up. It is filled with all sorts of promotional devices, advertising and catalogues for goods, services, "medicine," grooming, entertainment, travel and more. This is capitalism at its finest, a bizarre bazaar of products to separate you from your money. Step right up, folks.

Item 349 is a print of Cassie and Victoria Foster, the Fairy Sisters, Smallest Persons in the World. There was a time when it was acceptable to gawk at people because they were unusually small or had some other atypical features. Cassie and Victoria's parents made the most of this by displaying their children, 3 out of 11 of whom were very small. At the time of this printing, 1872, Victoria, the taller, was 11, Cassie 3. Neither was as high as a piano leg, as the image shows (next page). The two Nova Scotians were dubbed "the Fairy Sisters." Sadly, their diminutive size evidently led to health problems, and the two died within a month of each other in 1875. However, if you are concerned for their parents losing their meal ticket so soon, a brother, Dudley, who shared his sisters' stature, was born in 1877, and he provided a second generation of income for his parents until he died at age 17. Priced at $450.

Women were regularly targets for medical "cures" at the turn of the last century, and gullibility played into the hands of sort-of Dr. Hartland Law and his brother Herbert Law. Item 343 is The Viavi Gynecological Plates. Designed to Educate Mothers and Daughters Concerning Diseases of the Uterine Organs, published from San Francisco in 1891. The Laws would branch out into cures for many diseases, but it was women's issues that provided their bread and butter. They published books promoting cures, which focused on their Viavi line of products. The Laws promoted them through a Tupperware type of marketing, saleswomen getting together with other women, or renting out lecture halls to give advice and sell Viavi products. The saleswomen may have known little about health and medicine, but the same could be said for the Law brothers. Despite exposes and condemnation by the AMA, they sold tons of their products, and achieved great wealth. They converted much of that wealth into San Francisco real estate, including the luxurious Fairmont Hotel, and even after suffering massive destruction in the 1906 earthquake, they quickly bounced back rebuilding their properties. Perhaps their feminine products worked better for men, as both brothers lived to mid-century and died wealthy, though their once enormously popular product line has disappeared like other quack cures. $100.

This must have been a dying business when item 124 was published in 1910 - the W.A. Paterson Company's Designers and Builders of Vehicles. No, these are not automobiles. These are horsemobiles. Paterson built buggies and surreys and wagons in Flint, Michigan. This would have been a great business 20 years earlier, maybe still 10 years prior, but by 1910 Henry Ford was already pumping out Model Ts. Actually, Paterson wasn't completely oblivious to realty, and began making automobiles too in 1908, lasting until 1923. $125.

If it wasn't clear enough that horse and buggy days were over in 1910, that was the year Blanche Stuart Scott and Gertrude Lyman Phillips undertook 5000 Miles Overland. Wonderful Performance of a Wonderful Car. The Story of Miss Scott's Journey Overland. Miss Scott did all of the driving - 5,393 miles in a little over two months. The route took her from New York through Utica, Toledo, Chicago, Council Bluffs, Kearney, Cheyenne, Ogden, Lake Tahoe, Sacramento, and finally, San Francisco (where she could have stocked up on Viavi if she wasn't feeling right). This book is an account of an exciting journey through lands where roads would have been little more than dirt ruts. However, it is also a promotional piece, and the repeated use of the word "Overland," and the talk about a "Wonderful Car," gives away that it is promoting the Overland. The Overland was a fine automobile in its day, but the name disappeared in the 1920s. Overland combined with Willys, which was absorbed by Kaiser, in turn sold to American Motors, which was taken over by Chrysler, which was purchased by Mercedes, then spun off independently again, and finally, rescued by American taxpayers. You own Overland now, so to speak. Item 321. $400.