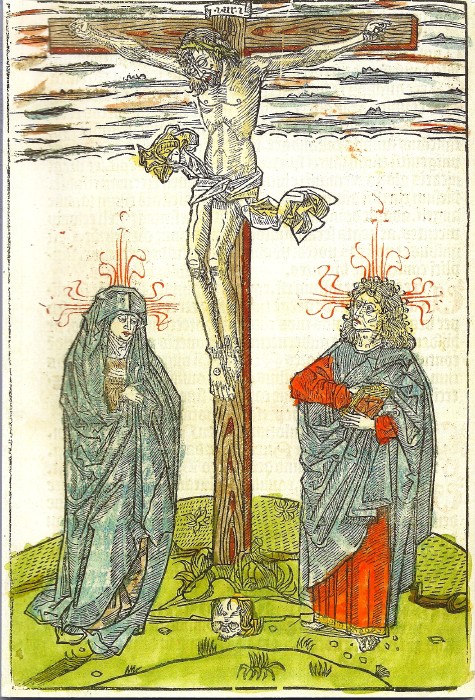 Bruce McKittrick Rare Books, of Narberth, Pennsylvania, recently issued Catalog 57. There is no stated topic for the material offered. What we can say is that despite their being located near a center of early American history - Philadelphia - the books in this catalogue are European in origin. Indeed, a great many of the items come from the days before there was a Pennsylvania, or a William Penn. This is a catalogue of material that ranges from old to very old, including incunabula. Many could only have come from Europe. Here are a few of the items we found.

Item 1 is a piece of incunabula, and McKittrick describes it as "the first printed book on architecture." The title is De Re Aedificatoria, by Leone Battista Alberti, published in Florence in 1485. This is a first edition of a book that has been described as the first Renaissance piece on the art of building, the first printed example of town planning, the first description of the ideal Renaissance church, and the first printed proposals for hospital design. Interestingly, Alberti advocated small, private rooms in hospitals, rather than large wards, something that took almost 500 more years to become the standard. The book also discusses, "frescoes, marble sculpture, windows, staircases, prisons, canals, gardens, machinery, warehouses, markets, arsenals, theaters…" It is, "a cornerstone of the Renaissance." Priced at $125,000.

Item 15 combines fields not often found together - architecture and chemistry. This is the first architectural work by a Brazilian writer, and the interest in chemistry arose from the 1755 Lisbon earthquake. Author Mathias de Eca was concerned with the chemistry of building materials as well as building design because of the strength issues displayed by the earthquake. The title is Problema DeArchitectura Civil, and the author discusses the chemical composition of building materials and adds a 140-page dictionary of chemical terms, likely the first such dictionary in the Portuguese language. This is the 1777 middle of the three issues of the book's only edition. $4,500.

Item 37 is Avstriaci Caesares Maria Anna, by Hortensio Pallavicino. It is a festival book, celebrating the visit of Maria Anna, the young daughter of Hungarian King and Holy Roman Emeperor Ferdinand III. She was passing through Milan on her way to Spain to marry her uncle, King Philip IV. The idea here was to keep the alliance between Spain and Austria intact, though the inbreeding would take its toll. She was originally betrothed to her cousin, Philip's son, but after both he and Philip's first wife died, it was decided that Philip should marry Maria Anna. They had three sons, but only the youngest, who was both mentally handicapped and physically deformed, survived. He became Phillip's heir. When Philip died while he was just three years old, her son became King Charles II. Due to both his young age and limitations, Maria Anna would serve for many years as Regent. $7,500.

If you collect portraits, here is your perfect book:  Chronologie Et Sommaire Des Sovverains, Pontifes, Anciens Peres… This is a 1631 scrapbook collection of sheets displaying the faces and brief descriptions of over 2,000 notable figures from history. Some are undoubtedly accurate representations, though some must have been fanciful as they include Hebrew Patriarchs and even Pagan Gods and Goddesses. There are also numerous kings and queens and popes, jurists, and famous Frenchmen, this set having been compiled in Paris. Item 39. $22,000.