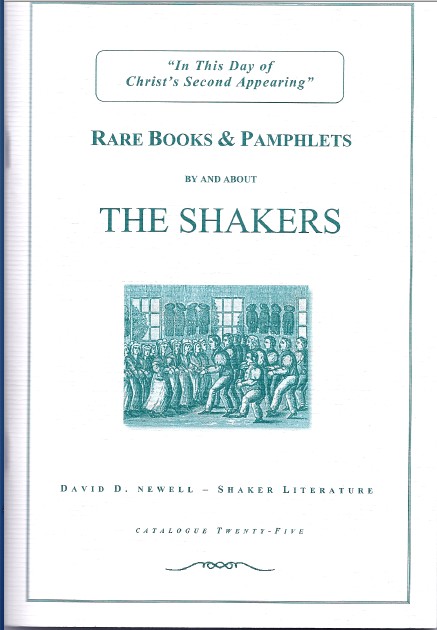 We have reviewed many catalogues of books about the Movers, people who led and changed the world. Now it's time for one about the Shakers. This is our first catalogue from David D. Newell - Shaker Literature, of Ashfield, Massachusetts (though it is his 25th catalogue). The title is Rare Books, Pamphlets, Broadsides & Manuscripts by and about the Shakers. Naturally, the catalogue features works by and about the Shaking Quakers, mostly from the 19th century, their heyday. There are a few about other idealistic religious communities, such as the Oneida Community, but it is the Shakers, who outlasted most, that provide most of the items offered.

The Shakers were formed by Mother Ann Lee, an emigrant from England (where her outspoken and unusual religious beliefs did not make her welcome). She settled near Albany, New York, shortly before the American Revolution, where she attracted a group of followers. She was focused on the second coming of Christ (the official name of her church was the United Society of Believers in Christ's Second Appearance), and she preached confession and celibacy as keys to salvation. She also believed in equality of the sexes, not well received, especially by men, in that time. However, to outsiders, her church was noted for their dancing, shouting, and carrying on, religious ecstasy to them, inappropriate behavior if not downright blasphemy to outsiders. As something of an offshoot of the Quakers, they became known to others as the Shaking Quakers, or Shakers.

The Shakers came to believe Mother Ann was a representative of religious perfection, almost a female Christ. Still, her leadership of the group did not last for long. Mother Ann died in 1784 at the age of 48, still in the early years of growth for the Shakers. In the last decade of the century, the group expanded rapidly throughout New York and New England, and in the early decades of the 19th century, they moved west as well, as far as Florida and California. During the period of the Second Great Awakening, the 1830s and 1840s, when the Millerites waited in trees for Christ's second appearance, the Shakers went through a similar revival, the "Era of Manifestations." This was the time for believers in the second coming, but when Christ failed to appear, the movements died out.

One doctrine that is not helpful for a group's long-term survival is celibacy. By the middle of the 19th century, recruitments, their source of new members, were drying up. By the end of the century, those who had come to the movement as children at its peak were dying off, and few replacements were joining in the new modern times. They relied on orphans or unwanted children left on their doorsteps, an uncertain source of new members. Decline would eventually turn to the inevitable - extinction. Most of their communities closed or combined during the 20th century, and when the end appeared certain, most stopped accepting new members for fear they would join simply in hopes of inheriting their assets when the others died off. There does still remain a tiny community at Sabbathday Lake in Maine, but that is all.

We will start with item 1, a well-known outsider's look at the Shakers in the early days, when Mother Ann Lee was still at the helm. It is a look at Deism by Ethan Allen, better known as the leader of Vermont's "Green Mountain Boys" during the Revolution:  Reason the Only Oracle of Man, or a Compendious System of Natural Religion. This is a long-delayed second edition, published in 1854 (the first was published in 1784). In a section on the Shakers, Allen writes, "the Elect Lady (as she has seen fit to stile herself)… instructs those who are young and sprightly among her pupils, to practice the most wild, freakish, wanton and romantic gestures, as to that of indecently stripping themselves, twirling around, extorting their features." Sounds like a rather wild time for a bunch of celibates. Priced at $450.

Item 37 has been described as "the definitive treatise on Shaker theology." The book is The Manifesto, or a Declaration of the Doctrines and Practice of the Church of Christ… by John Dunlavy. This is the rare first edition, published in 1818, near the peak of Shaker activity. Dunlavy was the chief elder of the Pleasant Hill, Kentucky, community. It was printed at Pleasant Hill on Shaker-made paper. $4,925.