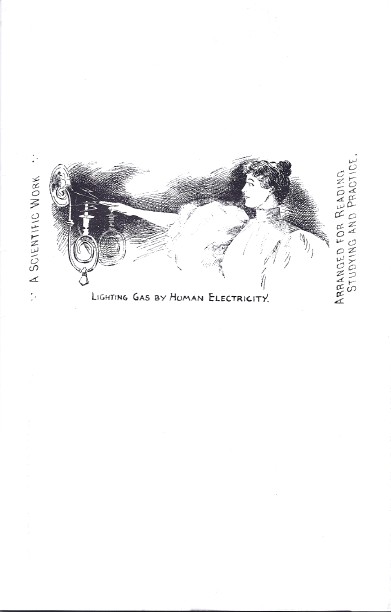 The latest in the unusual from Garrett Scott.

Garrett Scott, Bookseller, has released Catalogue 33 (Miscellaneous Acquisitions). Scott is noted as a purveyor of the odd and eccentric in the field of printed matter, though many of his books are of a more substantial and serious nature. Nevertheless, we are drawn to the train wrecks of intelligent thought, a fact attested to by the television programs we watch, the politicians we support. Back in the days before television and YouTube, the strange people could be found wandering the streets, or writing books. Here are a few, including the rational and irrational, from Scott's latest acquisitions.

The picture you see on the cover of this catalogue comes from item 51, an advertising brochure for Martyn College and two works by prolific author and crackpot Webster Edgerly. Like most of his books, the two promoted, Transference of Thought, and The Cultivation of Personal Magnetism and Human Electricity, were published under the pseudonym "Edmund Shaftesbury." What is apparently happening in the picture is a gaslight is being lit by the transference of personal electricity through willpower. Scarier, Edgerly preached that such magnetism could be used to control the minds of others. Crazy as the man was, he developed a large following at the turn of the last century, and one of his pseudonyms survives in the name of a well-known corporation. Edgerly was a believer in the power of personal magnetism, but he also wrote on many other topics, including diet, preservation of one's vital force, and some ugly racist stuff. He at one point used the pseudonym of a "Dr. Ralston," and founded the Ralston Health Club to promote his books and ideas. One food type he favored was cereal, which led the Purina Company to seek his endorsement of their product. Edgerly demanded his name be used in return for his endorsement, thereby giving birth to the Ralston Purina Corporation. Along with the crazy came the ugly, with Edgerly preaching the castration of non-white males and that watermelons were poisonous to Caucasians. Priced at $75.

There are simpler ways to good health than the detailed dietary and exercise rules promulgated by Edgerly. Here is an alternative from Charles Alfred Tyrrell:  The What, the Why, the Way of Internal Baths, Being an Exposition of Prof. Chas. A. Tyrrell's Celebrated 'J.B.L. Cascade,' a Device for Eliminating the Waste of the System. "Internal Baths" is, naturally, a euphemism for enemas. It was a cure for "autointoxication," the theory that poisonous wastes in the intestines could pass through the colon to the bloodstream and cause all sorts of unpleasant side effects. Dr. Tyrrell's J.B.L. Cascade (the "J.B.L. stood for "Joy, Beauty, Life") differed slightly from the typical enema in that while it used a rubber bag filled with water (and certain chemicals he added), instead of using gravity feed to move the liquid, the person sat on the round rubber bag, using the pressure of weight to force the liquid to its proper destination. Apparently, similar devices are still available today if you are interested in trying it. Item 60, from 1910. $75.

L.L. Bair of Kokomo, Indiana, reached similar conclusions to those of Tyrrell about health, and published his findings in Naturopsychoism:  The Hope of the World…to Perpetual Health and Eternal Happiness, circa 1918. Bair wasn't selling any devices or other products, so he just gave advice, which included enemas, diet, and a recipe based on Epsom salts. Bair claimed that 90% of all human ills were caused by constipation, based on the autointoxication theory still promoted to the gullible today. "I fearlessly and courageously make the broad and comprehensive claim, that if the alimentary canal and the mind were kept in a state of normal purity…there could be no disease in any part of the body."  To "fearlessly" and "courageously" Bair might have added "ignorantly." This pamphlet appears to be extremely scarce. Item 5. $200.