Travel, History, and More from Helen R. Kahn and Associates 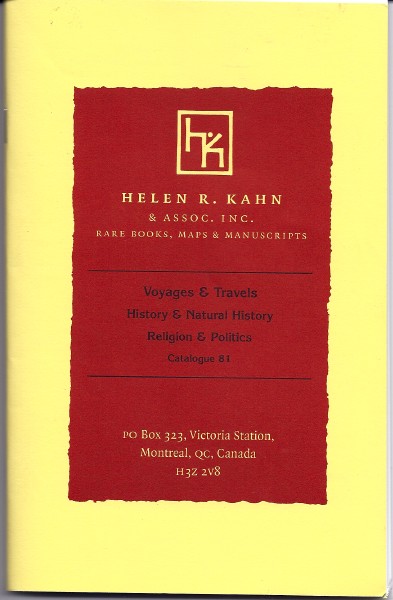 Helen R. Kahn and Associates have issued their Catalogue 81 - Voyages & Travel, History & Natural History, Religion & Politics. While the majority of items have a connection to the Americas, there are works related to Europe and Asia to be found here as well. There are books that range from the 17th century to the 20th, though most fall in the 18th or 19th. Many are pioneering works of exploration and discovery - geographical, anthropological, and scientific. There are also political disputes, theological beliefs, and more pertaining to a time long ago. Here are some examples of what can be found in Helen Kahn's latest catalogue.

Item 68 is one of the most thorough early looks at some of the American Indians, particularly the Iroquois tribes. Author Joseph Francois Lafitau was a Jesuit missionary who spent six years in Canada from 1712-1718. After returning to France, the Jesuits did not send him back to Canada, though his services were requested as a result of his great familiarity with the Indians and their language. Instead, Lafitau wrote about what he knew, a detailed account of the customs, religion, etc., of the natives. His book, Moeurs des Sauvages Ameriquains… was published in 1724. Lafitau also had an interesting theory. Based on comparisons of personal features and customs of the Indians, he concluded they had descended from the Tartars of Central Asia. Most amateur anthropologists of this time and even much later tried to trace the Indians to the Lost Tribes of Israel, but Lafitau's conclusion is consistent with today's beliefs of the Indians' origin, crossing over from Asia on an Ice Age land bridge. Priced at $9,000.

Item 14 is the first English language edition of A Voyage round the World, by Lewis (Louis-Antoine) de Bougainville. Bougainville traveled from 1766-1769, first delivering possession of the Falkland Islands to Spain, as required by treaty, and sailing across the Pacific, visiting various islands on the way. He brought back information about their natives that spurred the belief in the "noble savage," noble though uneducated people who lived idealistic lives. When he made it home, Bougainville had accomplished the first circumnavigation by a French captain. $8,250.

Item 32 is a Supplement au Voyage de M. de Bougainville…Fait par MM Banks & Solander, Anglois, en 1768…1771. Despite the title, this is not really a supplement to Bougainville's voyage. That title was probably used to extract greater interest among French readers. It is actually a translation of the unauthorized account of James Cook's first voyage that is generally attributed to James Magra. The Monsieurs Banks and Solander named in the title were the naturalists on Cook's first voyage. $1,750.

Here is another supposed translation from English to French, but this one is a fake. The title is Le Patriote Anglois… or the patriotic Englishman. This "patriotic Englishman" opposed England during the Seven Years' War and supported the righteousness of the French cause. The problem is that there was no such Englishman. The book was a piece of French propaganda, pretended to come from an English politician to make it sound more objective. Much of this book relates to the war in America, where it was referred to as the French and Indian War. Item 70, published in 1756. $2,750.

Item 108 is another one of those beating-the-gun accounts, but of a far less pleasant journey than that of Captain Cook. Pascoe Thomas traveled to South America with George Anson in 1740. The aim was to harass Spanish shipping along the west coast of South America. Anson had little success in this goal, and the journey was a total disaster for most of his men. Not for Anson, however, who emerged a wealthy man. All but one of Anson's six ships either sank or was forced to return before rounding the horn. Over two-thirds of his men died, most of scurvy, and some went through harrowing survival journeys back to civilization after their ships sank. On his way home, Anson lucked on a ship loaded with Spanish treasure, which he pirated, returning an enormously wealthy man. Thomas was fortunate enough to be on Anson's personal ship, so he, too, made it home alive. While on the journey, Thomas kept a detailed daily journal, which is the basis of his book, A True and Impartial Journal of a Voyage to the South-Seas, and Round the Globe, In His Majesty's Ship the Centurian, Under the Command of Commodore George Anson. It was published in 1745, three years ahead of Anson's own account. $2,150.

Item 57 reminds us too much of things going on today:  The Third Afghan War 1919 Official Report. As the number implies, this was not the first time the British found themselves battling Afghanistan and its varying tribes and unfriendly terrain. In this case, Afghanistan attacked British India in May of 1919. Why is unclear, though internal political considerations were evidently important. Two months later, the war came to an end, technically a British victory as they beat back the Afghans and maintained the border. However, the British and their Indian allies suffered more casualties, and Afghanistan emerged fully independent, not beholden to British influence. $225.