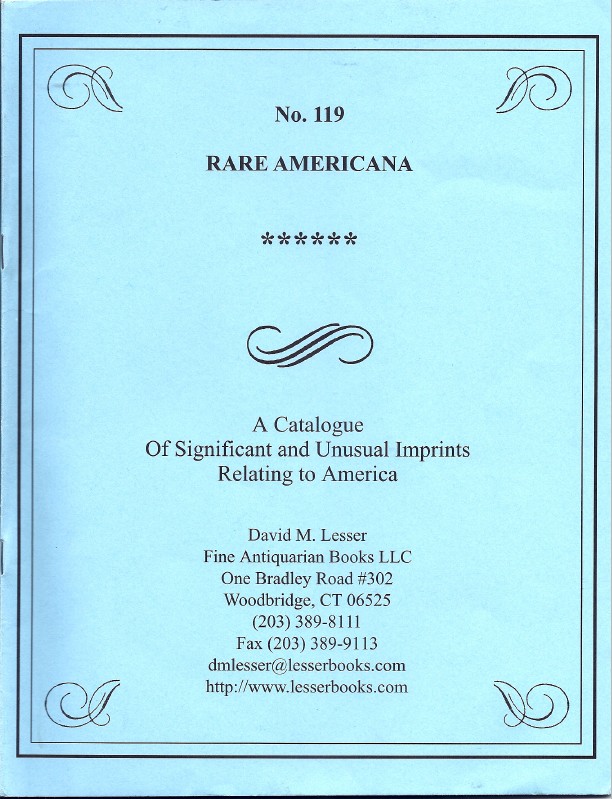 David M. Lesser Fine Antiquarian Books has issued their Catalogue 119 of Rare Americana. Lesser primarily offers pamphlets and shorter form material from 18th and 19th century America. There are always a few exceptions to all of these rules, in terms of size, date, and occasionally even location. Nonetheless, collectors within these parameters will find lots of material that will be of great interest, both from the perspective of collecting and understanding the times. Among the topics to be found are politics, religion, education, invention, crime, disease, science, and those terrible confrontations involving slavery and racism, and the seemingly inevitable road to civil war. Here are a few samples of what we found.

Item 65 is A History of the Trial of Castner Hanway and Others, for Treason, at Philadelphia in November, 1851. They were acquitted. Of all the facets of slavery, none stuck in the craw of Northerners more than the Fugitive Slave Law. Those other than ardent abolitionists could sort of look the other way from what was happening in the South, but they just couldn't countenance having to be a part of enforcing the slave system. The Fugitive Slave Law, which required them to capture and return escaped slaves, forced Northerners to take part in enslaving others. In this case, Edward Gorsuch, a Maryland slave owner with a federal warrant, attempted to secure escaped slaves in Pennsylvania. Instead, he was met with gunfire. Gorsuch and several others died. President Fillmore, first in the line of northern presidents with southern principles, sought to make an example of Hanway and the others. Philadelphians weren't having any part of it. The Maryland Attorney General wrote a pamphlet denouncing the trial, judge, and most of Philadelphia after the acquittal. This piece is a response by Arthur W. Jackson, an attorney for the defendants. Priced at $1,250.

You might think this issue would have gone away with the outbreak of the Civil War, but not quite. Item 67 is In the Matter of George Gordon's Petition for Pardon. [By] John Jolliffe Counsel for Petitioner. Rev. Gordon was indicted in federal court in Ohio in 1861 for violating the Fugitive Slave Law. Why were northerners still being indicted under the Fugitive Slave Law after the Civil War broke out? The answer is that there were border slave states still loyal to the Union, and President Lincoln did not want to drive them into the arms of the Confederacy. Lincoln pardoned Gordon in 1862, just before this work was published, saying his conviction was legal, but the sentence severe. Gordon and Jolliffe were still unhappy. They wanted the despised law to be found unconstitutional. Item 67. $250.

Item 106 is An Essay on Comets. Wherein it is Shewn…Comets may be Inhabited Worlds, and Even Comfortable Habitations. The author was Andrew Oliver, Jr., nephew and son of the loyalist Massachusetts Governor and Lieutenant Governor. Oliver found himself on the wrong side of that issue too, but stayed in America anyway. This essay positing the existence of life on comets, which was somehow demonstrated by their tails, was published in Salem in 1772. Oliver did correctly reject the notion that comets were some sort of celestial penal colony where the damned were subject to alternates of burning and freezing, though that would probably be a more accurate picture of what life would be like on a comet then is a heavenly paradise. $1,750.

Item 91 is a paper read before the New York Historical Society in 1872:  Incident in the War of the United States with Mexico, Illustrating the Services of Wm. Maxwell Wood, Surgeon U.S.N., by George Cumming McWhorter. Wood had been sent to Mexico to report on conditions there in the days before the outbreak of the Mexican War. Meanwhile, the Pacific Fleet under Commodore John Sloat had orders to quickly capture California if war broke out. However, these were the days before telephones and telegraphs, and so when war broke out, Sloat had no way of knowing. When war did begin, and Wood heard the news, he at great personal risk dispatched the news to Sloat before he received his official orders, enabling Sloat to quickly seize California. $500.

Item 63 answers the question, Why Colored People in Philadelphia are Excluded from the Street Cars. This dates back to 1866, but even then it is surprising, as other major cities such as New York had integrated public transportation during the Civil War. The pamphlet explains that the Mayor and others did not want "the ladies in my family to ride in the cars with colored people." This situation had become an issue in 1865 when a black war hero was forced off a city streetcar and made to walk several miles to the navy yard. This pamphlet argues for desegregation of the cars, but that did not come until the following year when the state legislature forced Philadelphia to integrate public transportation. $1,750.